During World War II, the newspapers took to showing photos in most editions of planes that were all shot up but still managed to keep flying and make it back to base.


It became almost a standing joke as to how little of a plane could be left and still not crash. These were usually bombers because those were the planes that were the toughest, but even fighters can take an awesome amount of pounding and still land safely.


Let's take a look at some battle-damaged planes of World War II that barely survived.


The next one below deserves special mention. This is "Sweet Pea," a Boeing B-17G in the 2nd Group, 429th Bombardment Squadron, 5th Bomb Wing, 15th Air Force. On Mission 279, it was flying over the Debrecen, Hungary, marshalling yards on 21 September 1944 when it was hit by a 88mm Flak gun. Normally, a direct hit from an 88 would destroy just about anything, including a tank. However, Sweat Pea made it back to Amendola air base at Foggia, Italy, 600 miles away. It only had one control cable left. The tail gunner and left waist gunner perished, everyone else survived. Incredibly, the plane was repaired and flew more missions. Congrats to the pilot, 2nd Lt. Guy M. Miller, the navigator 2nd Lt. Theodore Davich, and everyone else. I don't have any information on whether the ball turret gunner had to sit through that landing, but his hatch is open.


Some hits show just how much of a plane really isn't needed - if you just want to get home.


Japanese antiaircraft fire seldom gets much attention. However, it was just as deadly as German or British artillery.


Anyway, the pictures mainly speak for themselves. Some of them have little background on them - some mechanic or pilot simply snapped a picture and then developed it months or years later, never recording what had happened. But you can pretty much get the idea just from what's there, and what's missing.

The Soviets did not seem to document much of their battle damage. Stalin was so paranoid that he probably would have blamed the crews for sabotage if they came back with a damaged plane. Pilots had a lot of incentive to make it back to base on the Russian front, because if the enemy got you, bad things generally happened. 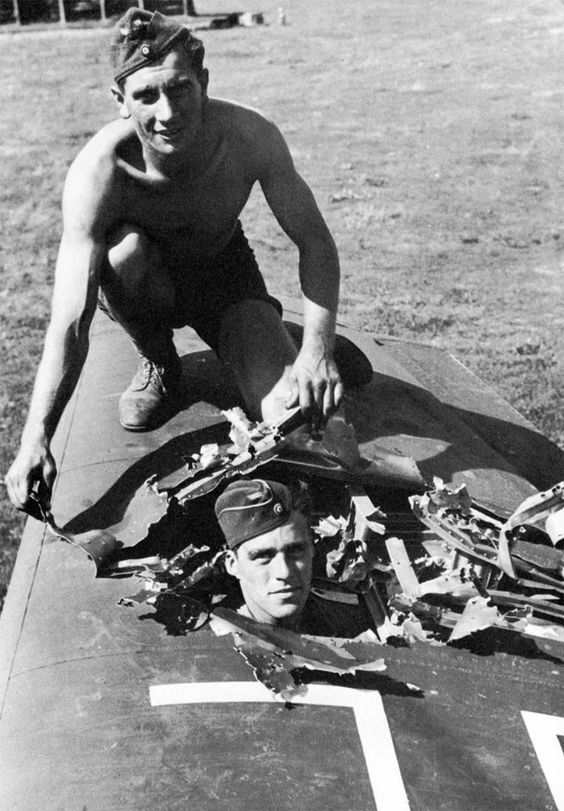 There's a story to this picture, might as well tell it.

It was a strike on Chichi Jima. This Avenger made it back and ditched safely near the US fleet. Only the pilot, Bob King, was aboard when he ditched. The other two crew members had bailed out after a midair collision with a 2nd Avenger that took off part of the wing (the other plane was flown by Bob Cosbie, and spun into the sea killing all aboard).

Jesse Naul was flying a 3rd Avenger and saw everything:

"I was behind Cosbie's plane. Suddenly, antiaircraft fire shot Cosbie's right wing off.
His plane went into a clockwise spin, It slammed into King's plane and the propeller hit King's left wing and chewed off four feet of it.
King's plane then went into a spin.
King thought they would crash, so he told his crew to bail out. Jimmy and Grady bailed out (and were captured and killed by the Japs).
King had his seat belt off, fixing to bail out, and to his surprise, he got the plane straight, he kept flying, nursing his damaged Avenger back to his carrier (USS Bennington). He was accompanied by other planes from the squadron.
All who saw the torpedo bomber still airborne with most of its left wing missing were amazed.
"We told him his landing gear wouldn't work, that he shouldn't even try," Naul said. "We told him he'd have to make a water landing."
King ditched his plane near the fleet."
After his bad jolt, King spent the night in sick bay, but he was alive. He was also a changed man.
"King was the most heartbroken man I ever saw in my life," Sengewalt told Bradley. "He lost two men and lived. He didn't say much. I think he never really recovered from that flight, he was so moved. We knew what he went through; no one blamed him. What he did was almost miraculous."


The next two photos show the same incident. A B-17 collided with a Bf-109, almost slicing off the entire tail section. Losing the tail would have made the plane crash. However, the tail stayed on until the pilot was able to land it. No injuries. 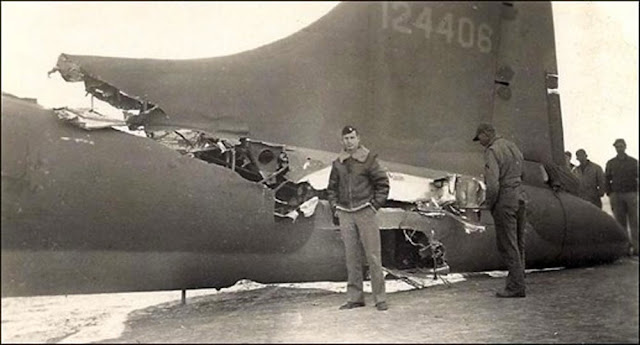 As I come across them, I will post photos here which appear to be perfectly timed to show a plane which appears to be capable of flying, but in fact is virtually certain to crash. Unfortunately, most photos in this category won't have much supporting information - the photos will have to speak for themselves, and we will have to draw our own conclusions.


The next one I include with reservations, because I don't know what actually happened. One source claims that it made a belly landing after taking anti-aircraft fire during a raid on Tunisia. Other sources say that this was just a well-timed photo, and the plane crashed right after this shot. It appears to be heeling over a bit already, so I go with the latter view - it probably spiralled in right after this shot was taken.