The Heinkel He 115 was the best combat seaplane of World War II. We've all seen pictures of humongous sea-going planes - those are flying boats. Seaplanes aka floatplanes were designed for offensive activities to which flying boats were generally unsuited. Many seaplanes exhibited high performance qualities. In fact, the famous Supermarine Spitfire was derived from racing seaplanes (and at one time an effort was made to convert it back into one). The Japanese also had very capable seaplanes that were serviceable as fighters (Nakajima A6M2-N (Navy Type 2 Interceptor/Fighter-Bomber), Kawanishi N1K Kyōfū). Unfortunately, little attention has been paid to the Heinkel He 115; it is one of those mystery planes that you read about in the literature, but may have a hard time visualizing.

Let me make one thing perfectly clear: this article addresses the best combat seaplanes of the war. I include "combat" because World War II is defined by the fact that combat occurred during it. By "combat," I include only planes that actually engaged in fighting (and were not just perhaps shot at).

There were several larger seaplanes and many larger flying boats in the world at various times during World War II that some might consider "better." These included but are not limited to:
However, these larger seaplanes/flying boats were mainly prototypes, conversions, transports or essentially just airline passenger planes with military markings. If you want to define the question of best seaplane broadly and not include "combat," then by all means pick one of the seaplanes on the list if you wish. If you feel that "seaplane" is a meaningless distinction, pick the Spruce Goose as the best plane that could float during the war (if you are only interested in size and ability to float). You could also define the question of "best" to include only planes that went on missions, or actually flew during the war, were not conversions, were designed to include armament, or whatever distinction you want.

There were some conversions of famous fighters that produced mixed results. These included but were not limited to:


Of these, the only worthwhile combat plane was the Zero conversion, designated A6M2-N ("Rufe"). Beginning in December 1941, 327 of these were produced. The A6M2-N, however, had a large central float that prevented it from carrying torpedoes or bombs. Strictly used as a fighter, it was mediocre and no match for Allied fighters carried on aircraft carriers, though it did come in handy in remote areas.

The point is that how you define the question will give you different answers, because all of these planes had different attributes. If you are looking for the seaplane that had the most impact on the war, the choice is pretty clear.

The Heinkel He-115 is my answer to the question of best combat seaplane of World War II, but it might not be yours because you may define the question differently. But the He 115 was a seaplane, it was big, many were built, it proved deadly against shipping targets, and it was used quite a bit to great effect in combat. During the early years of the war, the Heinkel He 115 made a big difference in the battles around the British Isles.


Not to belabor this too much, but saying that one of these other planes was the best combat seaplane is a bit like saying that the best car of 1938 was GM design chief Harley Earl's Buick Y-Job. The Y-Job was a phenomenal one-off concept car, decades ahead of its time. The Y-Job, however, never entered production and is forgotten except by car historians. Like the Y-Job, the seaplanes listed above were limited-production experiments, or not designed for the military at all. The majority never saw combat like the Heinkel He 115, the best combat seaplane of World War II.


Okay, on to our seaplane. The Reichsluftfahrtministerium (RLM) had a huge deficit in aircraft to make up in the 1930s as Germany re-armed. It knew that the Reich would need planes of every type, so, along with everything else, it put out a tender for a twin-engined general purpose floatplane. Blohm & Voss, which had begun as a shipyard, and Heinkel Flugzeugwerke, which was more a straight aircraft-design firm, both submitted proposals. B + V submitted the Ha 140, and Heinkel the He 115.

The RLM decided that both were acceptable, and paid for three prototypes of each. The Heinkel prototype was in the air by August 1937.


The 3-seater Heinkel's performance was so good that in early 1938, the RLM, in somewhat of a surprise given Blohm & Voss' experience and reputation, chose the Heinkel design. The Heinkel prototype came out almost perfect right from the start; it began setting international records for floatplanes and reached a maximum speed of 328 km/h (204 mph). Those were not quite fighter speeds, but they were astounding for a general purpose floatplane. 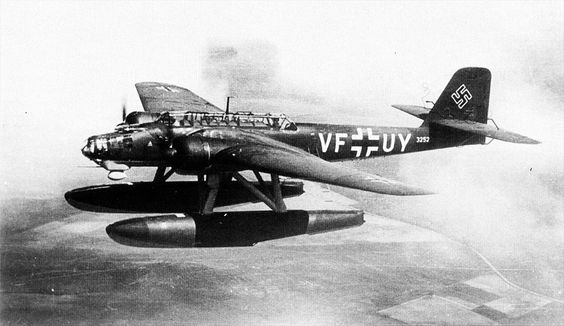 The initial armament was two 7.92 mm (.312 in) MG 15 machine guns, one in the nose and one in the dorsal position - at that time, machine guns were still considered sufficient for fighters. Later, after some wartime experience, the He 115 began sprouting other guns: 15 mm or 20 mm MG 151 cannon facing forward, and rear-ward firing machine guns in the engine nacelles. The design was good enough that it could be upgraded over time. The He 115 also was adapted to carry torpedoes and amall (250 kg, 550 lb) bombs. The He 115 was powered by two 960 PS (947 hp, 720 kW) BMW 132K nine-cylinder air-cooled radial engines, probably chosen because radial engines were in disfavor due to their size and thus were readily available. 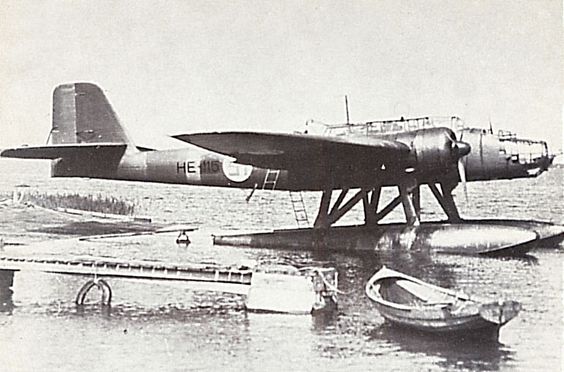 One of the priorities for the Luftwaffe early in the war was seeding British harbors such as the Thames estuary with mines. It also was used in anti-shipping roles against the Arctic convoys, where it excelled, and for reconnaissance and transport.


However, one thing it was not good at was tangling with top Allied fighters: this was amply demonstrated as early as 21 October 1939. On that day, a dozen He 115s attacked a British convoy in the North Sea. Defending Hawker Hurricanes and Spitfires from No. 46 Squadron soon arrived, and four of the Heinkels became casualties. In the far north, however, where the Allies had no air cover in the absence of carriers, the Heinkel remained deadly. He 115s were responsible for much of the destruction of Convoy PQ-17 in July 1942.


The Heinkel He 115 was very well-respected abroad. The Norwegian Ministry of Defence ordered a dozen of them, and six were delivered before Germany invaded Norway on April 9, 1940. Eventually, the Germans seized most of them. 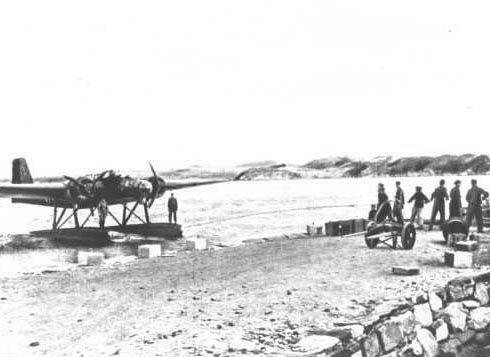 Four of the Norwegian He 115s escaped to Great Britain, where they were enlisted by the Royal Air Force to carry out leaflet operations over Norway. However, this operation was cancelled because of certain Luftwaffe opposition, and eventually the Heinkels were used in special operations both in Norway and in the Mediterranean region. 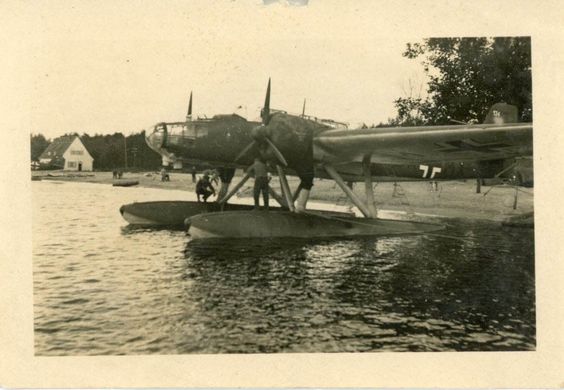 One of the Norwegian He 115s was flown to Finland right after the German invasion. It served there to good effect until lost on 4 July 1943. The Heinkels were extremely valuable for cloak-and-dagger operations in areas with lakes, which pretty much covered the entire northern sphere of operations. The Swedish Air Force also operated a dozen Heinkel 115s, and these remained in service there until 1952. 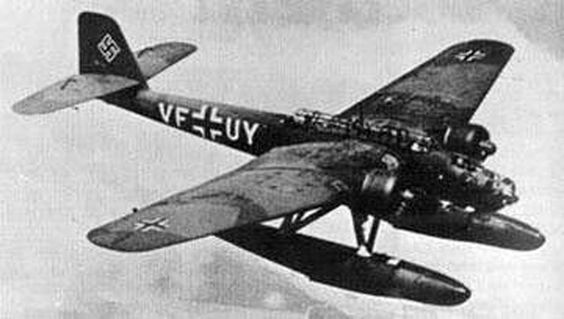 The Bulgarian Air Force also used some He 115s. The B/C series was the dominant version, and had increased bomb capacity, greater fuel capacity, and additional armament. However, though there were a number of variants, the basic He 115 design remained virtually unchanged throughout its life, and the different model numbers only differentiated planes oriented for specific purposes such as mine-laying, torpedo attack and the like.


There were 138 He 115s built, but all were destroyed during the war or shortly afterwards. Collectors being collectors, though, they began searching for recoverable wrecks. An A-2 was recovered in Russia, but is in private hands in France and has never been displayed. Its condition is unknown. A wrecked He 115 is known to be located at the bottom of the Lake Limingen in Nord-Trøndelag, Norway. There it sits until and unless someone has the inclination and, more importantly, the money to recover it.

There is one He 115 that is known to be in fairly good shape. A He 115 B-1 was recovered by a museum located just a few miles from the actual underwater wreck site, located at Hafrsfjord, Norway (near the main He 115 base at Stavanger) on 12 June 2012. That plane sank on 26 December 1942 after a bad landing ripped off the left float. Unfortunately, it is not complete because the Germans were able to recover the engine and the remaining float. However, what is left is in good condition considering that it sat on the bottom of the ocean for 70 years. The recovered He 115 sits in a tank of fresh water at the Flyhistorisk Museum, Sola, Norway to leach out the ocean salts. No decision has been made as to whether to restore it or simply display it as-is.