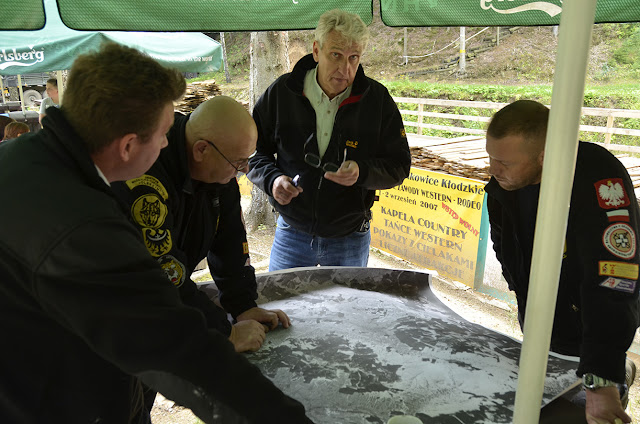 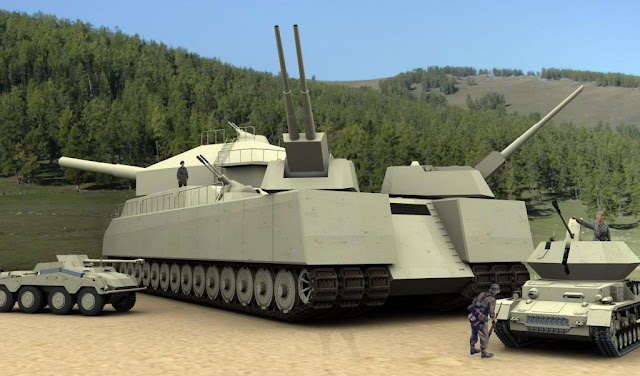 There was a reason the Third Reich developed fantasy tanks that had no realistic chance of being made. German industry always had a full staff of designers coming up with fantastic concepts that stretched the limits of imagination. Among the practical reasons for engineers to hit the drawing boards:
Thus, the Luftwaffe designers came up with extraordinary concepts such as vertical take-off fighters that still, as of 2015, remain extremely controversial and, many would argue, intrinsically impractical (such as the F-35).

The Heer (Army) designers also indulged in wild fantasy projects that had the sole advantage of capturing Hitler's imagination. The only difference between you and me dreaming up some fantastic nonsense whilst in the bathtub and them is that Hitler actually had the power to authorize some of them to begin real work on their crazy schemes.

The Landkreuzer P. 1000 Ratte is one such example. The story goes that in 1942 when the Third Reich was at the height of its conquests, a submarine designer at Krupp got Hitler's attention and proposed a sort of land battleship. It would house guns that were the same size as on Pocket Battleships (280mm) and be longer than a football field. Hitler succumbed to his love of big guns and authorized planning to proceed. One set of plans was completed that was little more than a sketch before Speer shut the whole project down in 1943.

The behemoth was completely impossible; its two MAN U-boat engines would have burned a liter of gasoline every 30 meters and destroyed every road or bridge that it encountered. A snorkel such as those used on U-boats would have been necessary for river crossings, and the Landkreuzers would have had to travel in pairs because their engines would not work underwater and they would need to use each others' power during crossings. What sort of land targets would be worth that size of artillery shell also is a wonderful question. Above all, the Allied air forces would be as attracted to such giants as a moth to a flame, endangering the 40-man crew. Speer made an excellent decision to terminate the projects.

The Landkreuzer P. 1500 Monster was another fantasy tank. This would have been a mobile 800mm Schwerer Gustav artillery piece, coincidentally also made by Krupp. The idea was even more far-fetched than the Ratte, requiring four MAN U-boat engines rather than two, and nothing whatsoever came of it.

Other projects came a little closer to completion but were still completely preposterous.


The Maus was not the only massive and completely unrealistic German tank project that was nearing completion as the war ended: a modification of the Tiger II to fit a much larger gun was well along the way, too. The official designation was: Geschützwagen "Tiger" fur 17cm K72 (Sf), fur 21cm Mrs 18/1 (Sf) und 30,5 cm GrW Sf I-606/9, or "GW Tiger" for short.

This was a heavy self-propelled gun. It was somewhat similar to the Elefant, which, despite its sad reputation, actually was a quite useful weapon. Tank destroyers without moving turrets such as the Stug were all the rage as the war dragged on, because turrets were complicated and expensive, and you could get 80% of the value of a tank at a fraction of the cost. Turrets also were a supply bottleneck, requiring all sorts of precise moving parts such as numerous ball bearings.

Not much is known about the GW Tiger, but it was quite real. On May 6, 1942, the Krupp firm received an order for heavy self-propelled guns based on the Tiger II. Work progressed for the remainder of the war, but no final version could be readied before the defeat.

Krupp developed the running gear to use in other projects. A preliminary plan of the GW Tiger, which received the official designation Geschutzwagen Tiger, was ready in early 1943. It was planned to use the self-propelled undercarriage of the Tiger II with an engine capacity of 650 hp - the same used in the Tiger, though that was upgraded to 700 hp later. It was to use a Maybach engine and an Olvar transmission. The main armament was planned as a massive 170-mm gun 17 cm Kanone 72, which could send the 68-kg projectile at a distance of 25,500 meters, or perhaps even a 210-mm howitzer (21cm Morser) with a range of 111-kg projectile about 17,300 meters. The maximum angle pointing for both types of guns in the vertical plane was from +65 ° to -5 °, horizontal angle pointing is 360 °. In view of the large size of these weapons, the tank would only be able to carry 5 rounds as a full load.

For comparison, the Tiger II had an 8.8 cm (88 mm) KwK 43 L/71 gun. So the GW Tiger would have been a massive step up in firepower, along with everything else. It was another manifestation of the "gigantism" which appear in many late-war German designs.

There were also projects to install on the same Tiger II chassis a 305-mm mortar Skoda GrW L/16, and even a 420-mm mortar. These never left the preliminary sketch stage. It would have been like putting a naval gun on a self-propelled platform, on a par with "Gustav" and "Dora." Sheer fantasy.

The crew of the GW Tiger would have consisted of eight people: a driver, gunner, commander, gunner and four ammunition handlers (the shells being so huge).

Krupp scrimped on the armor in order to save weight and precious nickel: maximum armor thickness was 60 mm in the front of the chassis, compared to the Tiger II's 185 mm. That would have been justified because this was a weapon to stand back and blast away, not get in the thick of the battle. The fighting weight of these self-propelled guns was estimated at 60 tons, roughly the same as the Tiger II.

There was no handy name for the GW Tiger like "Maus" to reference to this monster - unofficial names usually came about after some use - but some referred to the GW Tiger as "Gerät" ("The Device"). It also sometimes is referred to as the "Grille Königtiger" or "Grille" auf Pz.VIB ("Cricket"), which is a bit odd, but informal names often are, well, informal (such as the "Elefant").

The layout and construction of the prototype body on the Tiger II chassis was completed, as the pictures show, but that was it. In February 1945, on the orders of the Minister of Armaments Speer, all work was stopped. The Allies came into possession of the unfinished hull and scrapped it. They mystery lingers as to why the Germans had so many unrealistic weapons programmes in development at the end of the war, but the twin sirens of desperation and propaganda probably explain that.