Adolf Hitler was a poor young man, barely surviving on his father's meager death benefits, when World War I began. Living in a men's home in his native Austria, it couldn't have come at a better time. With nothing better to do, he served commendably in the German Army, earning a coveted Iron Cross Second Class. There was some difficulty in his enlisting in Germany rather than in the Austro-Hungarian Army, but the Germans were desperate for cannon fodder and Hitler wormed his way in.

There have been rumors about Hitler's sexuality for decades. They seem to spring from his boyhood friends in Vienna and stories about Hitler's sleeping habits while in the Army (apparently, he bunked with a close buddy and, well, it was just assumed...).  Some historians thus try to imply that Hitler was homosexual, but the evidence is scanty. Another theory is that he fathered a son with a Belgian woman during the war. Both rumors are hardly likely to be correct, but when you get somebody like Hitler, people are eager to search for any possible "whys."


After the first world war, the German economy was not very good, and former soldiers (the army was limited by the surrender terms to 100,000 men) started getting into political trouble. Hitler was assigned to infiltrate one such tiny organization. Over time, though, he rose to prominence within it and took it over. He went so far as to personally design the party's emblems, such as the Swastika. He attempted a government takeover which failed miserably.


Adolf Hitler, at age 35, was released from Landesberg Prison on December 20, 1924. Hitler had been convicted of treason for his role in an attempted coup in 1923 called the Beer Hall Putsch. The above photograph was taken shortly after he finished dictating "Mein Kampf" ("My Struggles") to deputy Rudolf Hess. Eight years later, Hitler would be sworn in as Chancellor of Germany, in January 1933.


Whereas before the war, Hitler reportedly had wasted a lot of breath haranguing his fellow men's-home residents with polemical outbursts, which they wisely ignored, after the war his words struck a chord. Whether this was because of his sudden status as a war hero, his talents as an orator, or because times were tough and people were simply looking for any strong figure is difficult to know now. 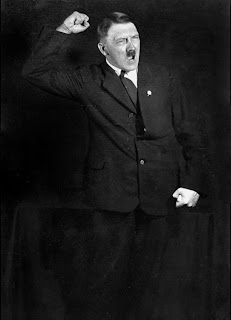 It was Hitler's talent as an orator that got him noticed at all. He addressed mass crowds in the mid-'20s, and was a featured speaker. Hitler took no chances: as the photographs taken by his personal photographer, Heinrich Hoffman, show, he practiced every gesture and nuance. He developed techniques still used to great effect to this day, such as stepping back from the podium to receive acclamations and making dramatic gestures. Hitler wanted these destroyed, but Hoffman buried them in his backyard for posterity. 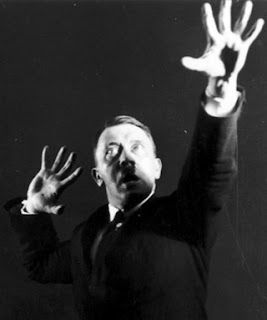 Hitler became quite popular, and not just within Germany. Many Americans who visited Germany in those days were all-too-happy to spend some time with the well-publicized german leader. Among them was American film star Clara Bow, shown below. Bow's career nose-dived soon after this picture was taken - Hitler had that effect on people.


Germany was plagued with a series of ineffectual leaders. The Chancellor wielded the real power, under the figurehead of the President. First elected in 1925, then re-elected, the President was World War I hero Paul von Hindenburg. People welcomed someone who seemed strong and able to maintain law and order.


Paul von Hindenburg was a strange case. He had been retired when World War I broke out, and upon recall had been assigned to what then was considered the less important Eastern Front. When the Western Offensive stalled, partially due to German troop transfers to the East, Hindenburg suddenly became the main figure protecting Germany from the surprisingly aggressive Russians. With the assistance (some would call it more than that) of his able subordinate Eric von Ludendorff, Hindenburg and the Germans stopped the Russians cold at the battle of Tannenberg. This victory ultimately led to Hindenburg (and Ludendorff) taking over all of Germany's military decisions. This didn't turn out very well in the end, but the German rulers needed someone to keep the country from falling apart, and Hindenburg was the man. Unfortunately, Hindenburg was old and feeble by the time the upstart Hitler gained popularity and was unable to offer any effective resistance. It seems pretty clear that, while Hindenburg didn't like Hitler personally, he had nothing against Hitler's authoritarian policies. In any event, he appointed Hitler Chancellor, and that was the key event on the road to World War II.


Hitler didn't really have to bother with Hindenburg after that, though he extended the necessary courtesies. Hitler controlled the Reichstag, the German Parliament, and he pushed through various laws (most critically, something called the "Enabling Act") which gave him supreme power. He paid lip service to the President's power and made an occasional ceremonial call on the distinguished old gent - and went about his malevolent business unmolested. Interestingly, Hitler continued having the Reichstag grant him more and more powers right through the war, continually tightening his grip on the country as if he weren't already the supreme power. It is strange to think now, but Hitler had a curiously legalistic mind when it came to his own powers and wanted his own all-powerful rights spelled out with exactitude.


It was all downhill from there for the prospects of world peace. Hitler had been in the world press for years, especially after the failed Munich Beer Hall Putsch of 1923. Setting forth his ideas in "Mein Kampf," which everyone bought but nobody seemed to read, Hitler gained renown as a smart leader. This created a mystique around him that beguiled the foreign press. Stunts like hosting the Olympics and flights by the growing fleet of Zeppelins that were cutting edge technology in the 1930s enhanced his - and Germany's - reputation.


Treated almost like a pop star by uncritical visitors, Hitler found that he could create his own foreign propaganda simply by giving press interviews.


Hitler's main concern wasn't foreigners, however. He constantly fretted about any threats to his dominance within Germany. He decided, aided by his trusty lieutenant (and former war hero himself), Hermann Goering, to settle matters once and for all. One night in early 1934, Hitler sent his goons out and murdered pretty much anyone he didn't like. After that, nobody dared challenge, not even the ailing Hindenburg, who died soon after.


At this point, Hitler had total control. Everybody knew who was in charge after Hitler killed practically every other famous political name in Germany with absolute impunity. This was when he turned toward cultivating the foreign press, who didn't seem too interested in the technicalities of why all those people were killed back in 1934. He didn't have to make too much of an effort, the foreigners came to him at his mountain home in Berchtesgaden. Berchtesgaden, incidentally, is right across the German border from his homeland of Austria, so that was probably the reason he loved it so much. 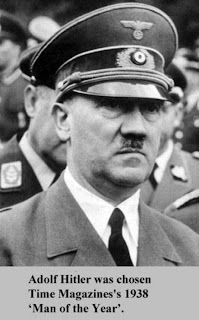 During this period of German rearmament, Hitler gathered around him the cronies who would be with him to the end. Josef Goebbels was an old acquaintance from the early Party days, and he also had the gift of gab, though not to the extent of Hitler.


Obsessed with indoctrinating everyone from the earliest age, Hitler established various youth groups. The most famous is the Hitler Youth, but there were similar groups for young women as well ("The League of German Girls"). The women were convinced to breed with men at Party rallies, and those who became pregnant (out of wedlock) were known as "Hitler Brides."


Hitler was a populist - he gave the people what they wanted. Unfortunately, what the people wanted - at least the most strident ones - wasn't always pretty or nice. Many citizens were bigoted against others, and Hitler saw this as an opportunity to motivate certain groups in his favor. Hitler's treatment of the Jews, of course, is infamous and will be treated in depth elsewhere. A more general for of mass incitement was book burning.


Hitler also appealed to Germans' positive natures. He knew, for instance, that people couldn't afford expensive fancy cars, so he worked with the automakers and designed his own cheap but hardy vehicle. It was the "Peoples Car." This later became known as the Volkswagen (literally "Peoples Car") Beetle. It was through initiatives such as these that Hitler gained favor with the people and overcame their natural resistance to a dictator. Works projects such as the autobahns and armaments manufacture gave people jobs and hope. "Guns, not butter" was the slogan, and it worked.


Another way that Hitler cultivated the masses was through annual rallies. These spectacles usually took place in Nuremberg, where his architect, Albert Speer, built a grandiose stadium and arranged klieg lights at night in such a way that they almost seemed to form a building of their own, high into the black sky. These rallies were extremely colorful, and very impressive to people fighting through the years of the Great Depression. They were a feature of both the Italian and the German fascist movements.


The Party rallies were held every year in Nuremberg in a specially built stadium. While Germany still did not have a lot of armaments until right before the war, they did have one impressive thing to show every year: masses of people who could be counted upon to obey orders without questions or scruples.


The pictures below were taken at perhaps the grandest of these celebrations, on the occasion of Hitler's 50th birthday on April 20, 1939. 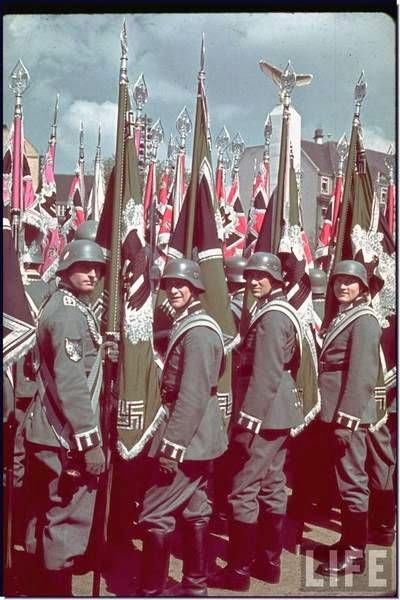 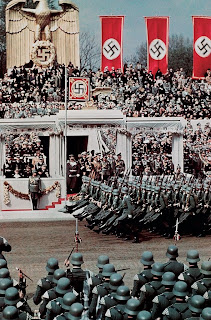 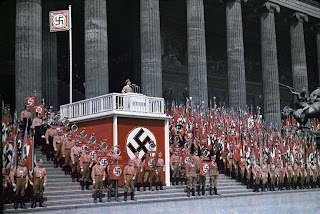 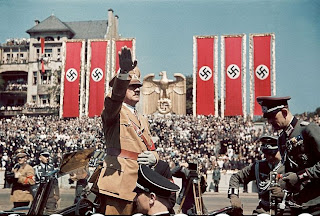 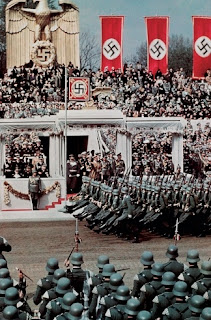 Having eliminated all opposition, and having carefully cultivated the populace so that they loved him, Hitler had a free hand. There were all sorts of handy targets nearby, and never was one to hesitate before picking a fight. Ignoring the warnings from the Democracies, he went about finding a "legal" pretext to invade his next target: Poland.


As 1939 ground on, Hitler grew more and more vexed about what he was going to do about Poland. He wanted to unite Germany proper with the historic home of the Germanic Knights in East Prussia, and Poland stood in the way. In essence, he was trying to recreate the German Empire of his youth. So, as in the above poster, he had Goebbels manufacture extremely unsubtle propaganda designed to incite his people against the "enemy," Poland, and its supporters Great Britain and France. Operation Himmler, an organized campaign to manufacture border "crises" supposedly instigated by the Poles but actually carried out by Germans in Polish uniforms, led into the Gleiwitz incident and then, on September 1, 1939, actual invasion. Great Britain and France declared war in support of Poland on September 3, 1939.

Welcome to my World War II site. As the greatest military confrontation in history, World War II deserves to be remembered. In this blog, I intend to cover every facet of the war, from both the Allied and the Axis perspective. Eventually, I hope to have a permanent memorial to the war so that none may forget the great sacrifices made by men and women on both sides and all fronts, as well as the innocent victims that always accompany senseless conflict.

You may think that you know all there is to know about this well-publicized and documented war, but if you browse through a few pages, I believe that you will see things you've never seen before. 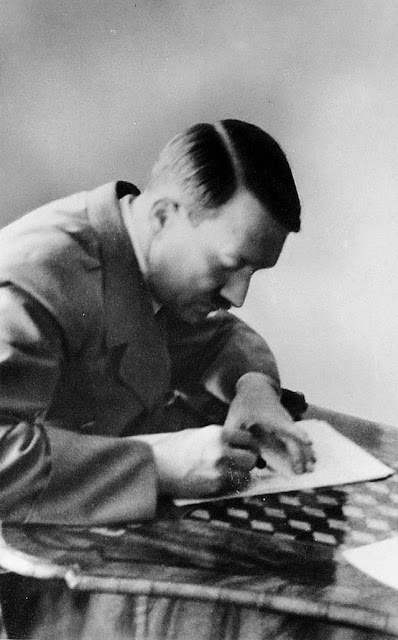