This Girl Was A Real Killer

One area of arms in which women unquestionably excelled during World War II was as Soviet snipers. Some of the deadliest combatants of the war on either side wore skirts, and they weren't just Scotsmen. Female sniper kill counts ran into the dozens, and sometimes into the hundreds. While there were many male snipers, and they did quite well, too, it was in this field (and also as night witches) where Soviet female soldiers came into their own.

Roza Georgiyevna Shanina (3 April 1924 – 28 January 1945) was one of the best Soviet snipers, credited with 59 confirmed kills (54 according to some sources) and many more wounded (some of whom also may have perished from their wounds). She was the first female Soviet sniper to earn the Order of Glory.

Praised for her shooting accuracy using a Mosin Nagant M91/30 rifle with a PU scope (3.5x), Shanina was capable of firing precise semi-automatic shots on moving enemy targets and scoring multiple kills ("doublets"). She volunteered to serve as a marksman on the front line and thereby blazed a trail for future female snipers.


Roza volunteered for service after the death of her brother during Operation Barbarossa.

Roza had a very good aim, which she displayed at sniper school as well as on the battlefield. With her good lucks and prowess at killing enemy men, it wasn't long before she became a national heroine.

Rosa was named after Rosa Luxembourg, a German communist revolutionary. She was a self-willed girl and left her small village at 14 to attend college in Arkhangelsk.

She had to walk 120 miles across the tundra to the nearest train station in order to get there, but that was nothing new, as she had walked 8 miles to school every day for years. Her parents objected, but you know how teenagers can be.

While at college, Roza broke curfew often and climbed into her upstairs room via tied bedsheets. Ultimately, for financial reasons, Roza took a job as a kindergarten teacher while taking occasional classes.

When war broke out, two of Shanina's brothers were killed in 1941, and later two more as well. The Soviets had begun recruiting female snipers because of what they believed to be unique female traits suited to that endeavor.

It seems they were right because many of the war's top snipers were female. Roza was above average in height, with light brown hair and blue eyes, and spoke in a Northern Russian dialect.

Shanina volunteered after her second brother's death, but her application was denied (perhaps because of her age). She then learned how to shoot at a nearby range on her own. On 22 June 1943, exactly two years after the war began, she was admitted into the Vsevobuch military training program. 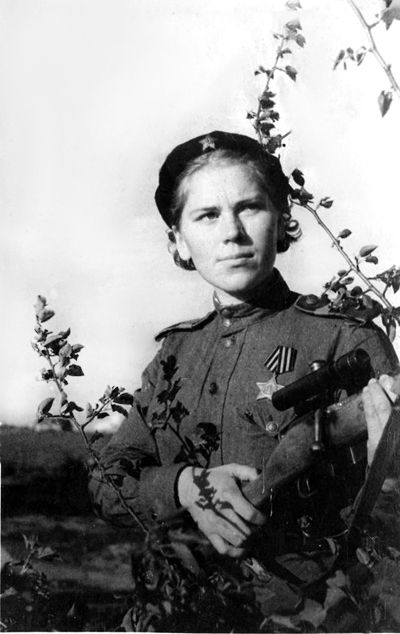 Shanina enrolled in the Central Female Sniper Academy. She did well in training and requested a front-line unit. Roza joined the 184th Rifle Division. 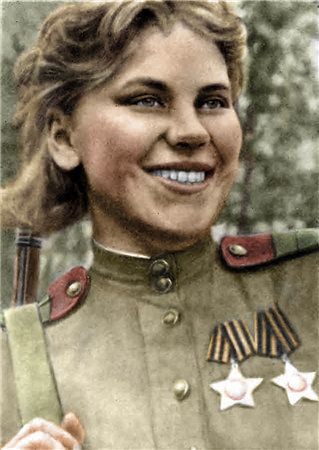 The Soviet leadership, contrary to some pre-war propaganda, was not eager to send women to the Front to be killed, but Roza demanded the chance. It is said that she snuck out to join the forward troops.

On 2 April 1944, she was made commander of the all-female 1st Sniper Platoon of the Soviet 184th Rifle Division. Ultimately deployed on the northern part of the central front near Vitebsk, she scored her first kill on 5 April 1944. Between 6 and 11 April 1944, Roza was credited by her commander with 13 kills. She received the Order of Glory 3rd Class on 17 April 1944, becoming the first female sniper to earn this award. Her tally of victims continued to rise, and she killed an even dozen of enemy soldiers during the Battle of Vilnius.

On 9 June 1944, Soviet newspaper Unichtozhim Vraga featured Roza on its cover. During Operation Bagration, the reconquest of Belorussia that began on June 22, 1944, Shanina advanced with the front-line troops against orders. She received an official reprimand (we would say that she was "written up"), but she did what she had to do. 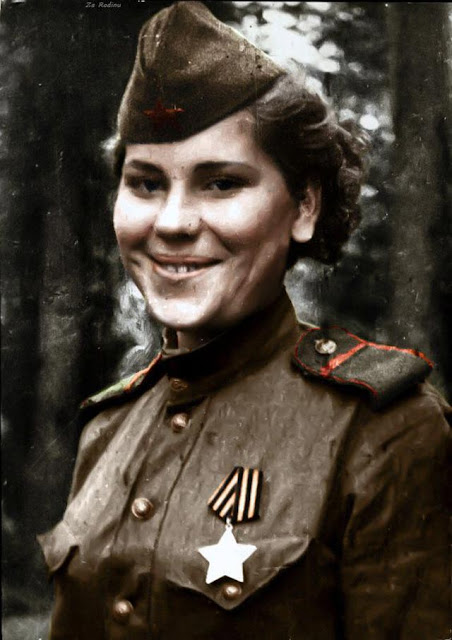 While usually armed with a sniper rifle, on occasion Roza used a submachine gun. She used "blinds," hidden spots near the German lines which were specially camouflaged. She also was adept at taking out German snipers hidden in trees by waiting until the light was just right for her to spot them. 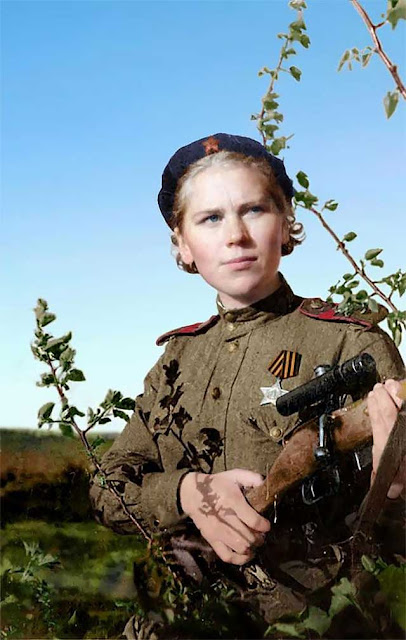 As Operation Bagration proceeded, Shanina advanced with the troops into East Prussia. She often had multiple-kill days, once recording five in one day. She was awarded the Order of Glory 2nd Class on 16 September 1944.

Fierce fighting developed around the border town of Schlossberg (now Dobrovolsk), and the town (the first German town occupied for a time by the Soviets in September) was not finally taken for good until 16 January 1945.

Roza was in the thick of it and received the Medal for Courage on 27 December 1944.

With the Germans now backed into their own homeland, the fighting became fiercer than ever. Roza was shot in the shoulder on 12 December 1944. She required an operation but recovered quickly. Upon her return, obviously a hard-nosed kid, she was given permission for front-line combat. She had developed into a killing machine, and claimed 26 Germans killed along the East Prussia border. 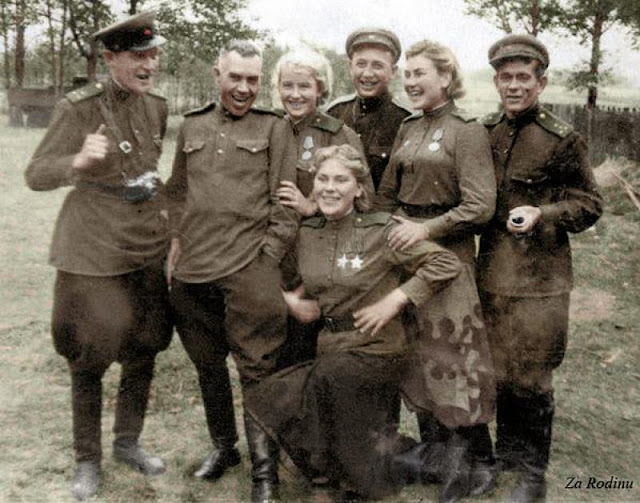 According to her diaries (which were prohibited by Soviet law), published long after the war, Shanina had an urge to be on the front lines even though her head told her it was a bad idea. She also at times engaged in hand-to-hand combat, along with other female snipers. Her diaries also allude to some unfulfilled romantic longings for fellow soldiers. Her last diary entry, just before her death, was very dark on this score.

It is fair to say that there were internal contradictions to being one of the top killers of the war and also finding romantic/spiritual fulfillment at the same time. Just because she was beautiful did not mean that her fellow soldiers who were fighting for their lives every day and living in mud and dirt were falling all over her. She also lost many friends as casualties, and her entire platoon save a handful of others was wiped out.

Entering the built-up areas of East Prussia exposed everyone to random sniper fire, and the artillery and rocket fire became intense. The Germans were fighting with extreme savagery out of sheer desperation. Contrary to what one might think, Soviet casualties during this late stage of the war were enormous. Ultimately, it was German artillery that got Roza (some sources say a grenade). Shanina raised her risk by volunteering for hazardous assignments such as what she described as a "melee combat." 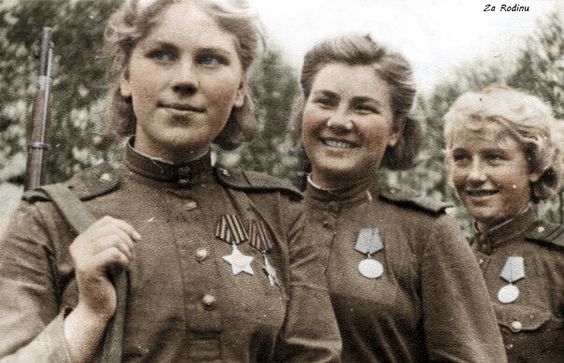 While serving in the 144th Rifle Division, she was mortally wounded by a shell fragment on 27 January 1945 near Richau Estate (later Telmanovka) in East Prussia (near Novobobruysk in Kaliningrad Oblast, Russia).

It appeared that she was sheltering another soldier with her body when she got hit by shrapnel (both perished). Roza Shanina died the next day.

Originally buried on the shore of the Alle River (now Lava), her remains are located in Znamensk, Kaliningrad Oblast. 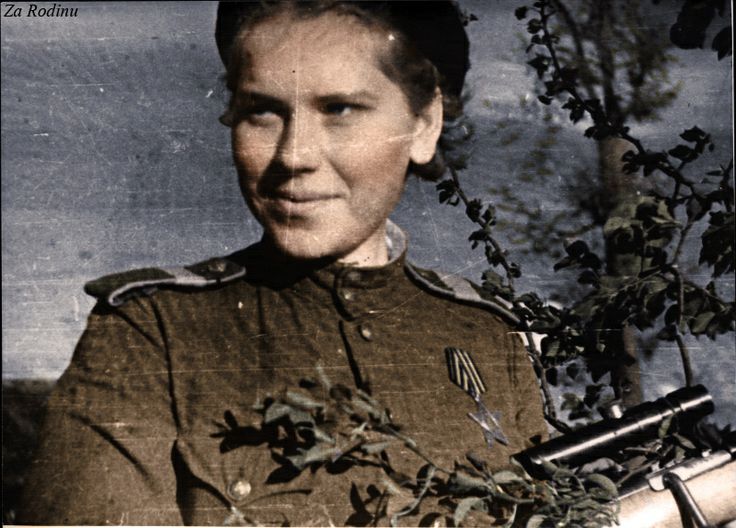 War correspondent Pyotr Molchanov somehow kept Roza's diaries in Kyiv for decades after the war. Her story began to circulate with the publication of excerpts from her three-notebook diary and letters in the magazine Yunost in 1965. Several streets have been named after her, her high school has a commemorative plate, and there is a museum dedicated to Roza in the village of Yedma.

Roza was not the top sniper of the war, nor the top female sniper (that would be Lyudmila Pavlichenko, 309 kills). However, her reputation and trail-blazing spirit were immense, and her picture appeared during the war in various Soviet media outlets and even some Western ones as well (such as Canadian newspapers that termed her "the unseen terror of East Prussia"). 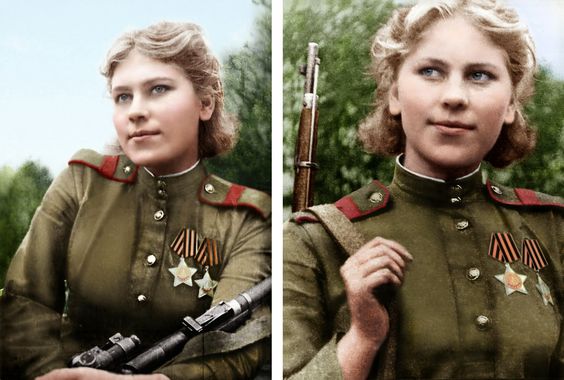 Despite dying at the tender age of 20, her fame is immortal. After her death, she received numerous accolades and awards, some quite recent. She became even more of a national heroine than she had been in life, though during her life she was honored as well. You may never have heard the name Roza Shanina before, and may never again, but in Russia, she is a legend.