Captured Weapons Put to Use

Using captured weapons against their previous owners is nothing new. All armies capture weapons here and there, even losing armies, and sometimes the weapons are in perfect condition. Even if they aren't, often they can be repaired to good working order. 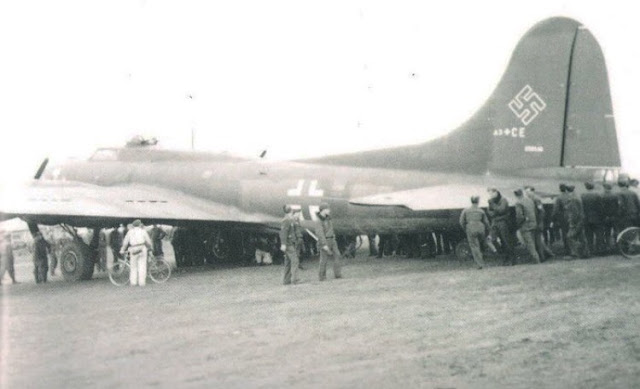 The Germans captured all sorts of weapons, for instance, even as the Wehrmacht was in full retreat. Allied planes would make belly landings after developing one sort of issue or another, or bases would be overrun. An underlying theme of World War II is how often an advancing army captured huge stockpiles of enemy weapons and supplies.


Some captured weapons were used at testing facilities to determine their strengths and vulnerabilities. Others, the Germans simply used in the field.

The Allies used captured weapons and ships and so forth, too. However, the Germans seemed to practice this sort of opportunism more than the Allies.

While the weapons were not superior to their own, sometimes something is better than nothing. So, the Germans and others put them to use even if they were patently inferior goods.

It wasn't just the Axis that did this, either. Everybody used captured equipment if it served a purpose.

Seeing common weapons of one side used by the other is a bit startling, especially when those weapons have become "famous" or are now considered "classic," but it was quite common.

The Germans had an entire Luftwaffe unit composed of captured Allied equipment, KG 200. It had both bombers and fighters. They had a special name for them, "Beute Panzerkampfwagen" (booty tanks), often just shortened to Beute Panzer.

The British had a similar outfit, established during the Battle of Britain. It was No. 1426 (Enemy Aircraft) Flight RAF, nicknamed "the Rafwaffe."

Panzer Abteilung 216 in the Channel Islands and some divisions (eg. 7th SS Freiwillingen Gebirgs Division "Prinz Eugen" in the Balkans) were exclusively equipped with captured equipment.

The practice began very early, and the Finns were known to use captured weapons extensively during the 1939-40 Winter War.

Some Soviet weaponry was highly prized. One example was the Soviet sniper rifle. While a proud Wehrmacht officer might not admit that it was superior to the best German sniper rifles, a Soviet Mosin-Nagant rifle (officially the 3-line rifle M1891) with a good telescopic lens certainly would do in a pinch (though the best sniper of all time, Simo Häyhä, did not like the scope because he felt it revealed the shooter to the enemy). In fact, the Soviet Mosin-Nagant sniper rifle was so good that it remains in use in various places in the 21st Century. Over 37 million of these sniper rifles have been made (13 million by the end of World War II). The Finns, who could use German or Soviet equipment, chose to use the Mosin-Nagant with some modifications.

Soviet submachine guns also were quite handy and reliable. You also could pick them up and throw them down without having to explain to anywhere where your weapon went.

Runs out of ammo? Toss it and pick up another, there were usually dead Soviets around somewhere who didn't need their own any longer.

The Allied equipment was used by the Axis for various clandestine operations, particularly in the closing months of the war, but also sometimes just for daily activities.

Even Polish equipment from 1939 was put to use for point defense years later. Why not? Beats walking.


The first Flying Fortress captured by the Germans was B-17F-27-BO "Wulf Hound" (41-24585) from 360BS 303BG "Hell's Angels". It was damaged by German fighters during a bombing run on 12th of December 1942 and then suffered more hits during its return flight through the Kammhuber Line by a Bf 110 night fighter from NJG 1. The B-17 pilot, Lieutenant Flickinger, elected to land at Leeuwarden airfield in The Netherlands. The bomber was quickly repaired and two days later (after adding German markings) was escorted by two Bf 110s to Rechlin. The evaluation there revealed the strengths and vulnerabilities of the bomber and gave the Luftwaffe engineers ideas for their own designs. Wulf Hound then became the centerpiece at a June 12, 1943, exhibition of captured planes at Lärz airfield. Together with the B-17F, the exhibition included a B-24, P-47D, P-51, P-38, Avro Lancaster, DH Mosquito, Typhoon, and a Spitfire, among other equipment. "Wulf Hound" then returned to Rechlin in July 1943 and was used in trials towing a DFS 230 glider, remaining under evaluation. The bomber ultimately was transferred to KG 200 in September 1943 and coded A3+AE. It was used in some late-war clandestine missions.

The Germans captured about 40 B-17s, and they restored about a dozen to flight capability. They also had an entire class of captured French, Czech, and other nations' weapons, including tanks.

Those weapons stretch the meaning of "captured" because the Germans quickly put the conquered nations to work producing more of those same weapons for them under German names.


One such operation in 1945 landed German agents behind Allied lines in France with suitcases full of counterfeit francs, with the intent of collapsing the French economy through hyperinflation. It failed, and the agents disappeared with the loot (and probably bought a castle or two with it after the war). Another use of Wulf Hound, though, Operation Carnival a month after that, was an unqualified success.

The plane undoubtedly was used in other clandestine operations and would have been useful for dispersing compromised people to Spain or other safer havens.


Use of American equipment extended far beyond Wulf Hound, of course. The commonly known story of the Battle of the Bulge is that the Germans infiltrated behind US lines using equipment the Germans had captured. This was Operation Greif, organized by SS boss Heinrich Himmler. It did not come to much.

The Germans did use their captured equipment during that operation. However, much of the equipment used in Operation Greif was German weaponry with the markings simply switched to American markings. It didn't really fool anyone but did create an enduring legend.

Captured weapons may not swing the tide of war, but they can come in handy for ordinary grunts who would rather ride than walk, even if it is in a captured British lorry.

The US forces also, of course, captured all sorts of German equipment, including their very best. As the best stocked of all the armies, though, US forces tended not to use its captured equipment very much in combat. Such captured equipment was quickly shipped back to the US for testing and evaluation.

The Germans were quick to use captured Soviet tanks. While nobody could admit it, Soviet armor often was at the very least the equal of German tanks, and quite often superior.

Legend has it that at one Time, elite SS Panzer Division Das Reich had more than 200 T34s in their inventory. Better to use a Soviet tank than no tank. Spare parts could be had on the battlefield... assuming you kept advancing.


At one point, the Germans even considered simply copying the T-34, but German factories were not set up with the right machining to replicate it. Besides, it would have looked bad.

Still, the Germans needed a quality medium tank. So, instead, they developed what many consider the finest tank of the entire war, the Panther. It was not perfect - it had transmissions issues and was a bit fancier than the basic tank (in larger numbers) the grunts really needed - but it was a classic, well-thought-out product that tended to get the job done when you needed it.

During Operation Barbarossa, the Germans captured immense stockpiles of Soviet equipment. They captured so many Soviet 76.2mm anti-tank guns that they designed an entire weapons system around them, the Marder tank destroyer. Initially, the Germans just bolted the captured guns to the top of other captured equipment, the 38(t) Czech tank, and sometimes onto captured French Lorraine tanks. They also were a good way to recycle obsolete Panzer IIs. Later Marders had new undercarriages. While not the world's greatest weapon (they had very weak armor), Marders were reliable and useful in defensive situations outside of cities (open on the top, snipers could fire down on exposed crews). They were sort of the "poor man's StuG." Marders went into numerous units, including some of the best (SS Divisions and the Hermann Goering). About 350 Marder Ausf. Ms remained in combat during the last days of the Reich.

Naturally, the Soviets used German equipment as well. One could say that using captured equipment is a compliment to the opposing army, but in reality, it is more simply a way for ordinary soldiers to improve their firepower and perhaps survivability with whatever is lying around.

If all you have is a rifle and you find an enemy submachine gun with ammo in the field, using it makes you a little more fearsome regardless of whether your own army's weapons have higher quality ratings. Naturally, captured weapons also give you a little more credibility if you are trying to infiltrate enemy lines and you are posing as something that you are not.

Sometimes, a deprived army isn't actually interested too much in using captured equipment. Rather, they have enough weapons and are more in need of more mundane enemy goods. Captured weapons always look good for the photographers, though.

Sometimes, capturing enemy stocks can become an objective in and of itself. During the Ardennes Offensive in December 1944, a key to the German plan was to use elite forces to break open the American lines so fast that large quantities of gasoline and other scarce supplies could be captured to fuel the advance further. Much was captured, but not nearly enough to supply the entire Wehrmacht during its dying days.


The use of captured weapons was much reduced in the Pacific Theater of Operations because of the nature of the island-hopping campaigns. If you were going to invade an island, you wouldn't need to bring along any captured equipment, and most of the island battles didn't last too long (with some notable exceptions). Japanese tanks were obsolete and few and far between, but now and then more mundane enemy equipment came in handy.


Things are not Always What They Seem


Finally, you have to be careful when assuming some enemy weapons were "captured." To illustrate the point, the Dornier Do 17 was a well known Luftwaffe plane, so seeing one in British colors naturally leads to the impression that the British must have captured it and put it to use. However, pre-war weapons sales often went to later adversaries. The above German Do-17 in British markings, for instance, is not a captured aircraft. Instead, it is a former Royal Yugoslav Air Force Do 17K escaped from that country after the Kingdom of Yugoslav’s fall in April 1941.

Between 14 and 15 April 1941, seven Yugoslav Do 17Ks flew to Nikšić airport and took part in the evacuation of King Petar II and members of the Yugoslav government to Greece as well as of the Yugoslav gold reserves. The planes, together with the S.79K used for the King’s escape, landed at Paramythia, a Greek airfield not far from the border with Albania which at this time was still the base of RAF No 211 Squadron. Five of the Dorniers were soon destroyed by an Italian Air Force raid. The two survivors escaped to Egypt, just before the fall of the base into Axis hands, together with the S.79K with the young King (18 years) on board. In Egypt, both of the German-built planes, previously in the Royal Yugoslav Air Force’s 209 Eskadrila, were absorbed by the RAF and allocated codes AX707 and AX706. Their life in the RAF ranks was extremely brief: both were destroyed by an enemy air raid on 27 August 1941, an unusual instance of the Luftwaffe being happy to destroy German-built aircraft.

Captured weaponry is handy for regular army units, but it is absolutely critical for partisans. With no other source of weaponry, a submachine gun grabbed from a dead soldier could turn a hanger-on into a useful fighter.