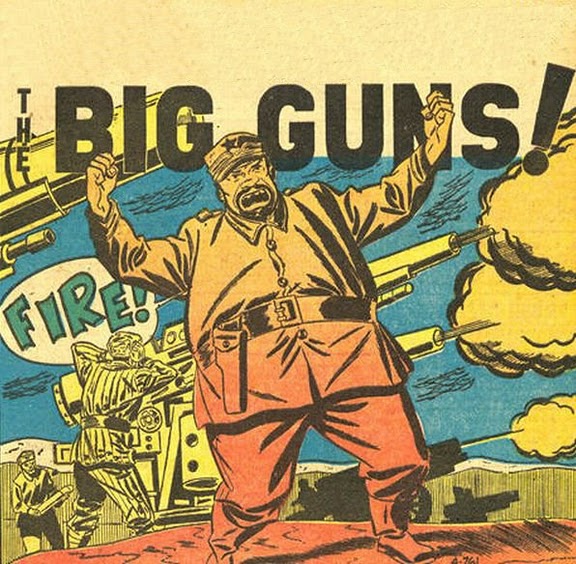 Big Guns of World War II - Sometimes, you just want a little gun fun. Believe me, I know how it is. The teacher got you down? That boss acting crabby and demanding? Spouse or sibling just needs to be taught a lesson? This is a fun page to just let it all hang out.

Well, here you go. Almost all of these are German weapons because, frankly, they were into it more than the other combatants.

The propaganda department worked overtime fetishizing the muzzles and poses - see above - of these monsters.

But there are some Allied big guns, too, though the Allies tended to be more practical in this area.

All you need to know about Germans and their big guns was that they were the only army who named theirs. "Dora," "Gustav," "Ziu," "Bruno," on and on. Have you ever heard of a US artillery guy naming his artillery piece or mortar "Betsy" or "Albert" or "Johnny"? I haven't.


Some of these pictures aren't actually of the biggest guns - the U-boats, for example, didn't have huge guns - but those are included because the camera really catches them in all their mammoth glory. You'll be just as dead if one of those hits you. These go all the way up to 280mm railway guns - those are big guns. In general, the biggest guns were naval artillery on battleships, but it's only when you put them on land and stand a man next to them that you get the sheer impact. And, believe it or not, the Germans had plans to put the biggest naval artillery onto tanks. Yes, the Germans thought big.

If you ever go to a German military museum, seek out the cannon shell for a Schwerer Gustav railroad gun. The shell is as big as a Russian T-34 tank! The Germans destroyed their big guns at the end of the war to prevent their capture, so very few survived intact, and none of the very biggest.

No museum would be big enough to show the biggest anyway - and you'd have to build two parallel tracks for it to sit on. Probably just as well. Just keeping it from rusting away would require a team of men.

We all know the story that the big guns were useless and immobile and bomber fodder and all the rest. The biggest required thousands of men to set up and operate and were rarely used. General Heinz Guderian knew that during World War II, too, he wasn't a fool, but there was nothing he could do to stop the foolish misallocation of resources.

The biggest guns undeniably were not worth the cost. In fact, the results achieved generally were not even worth the cost of the shells fired to achieve them, let alone factoring in the cost of building, manning, protecting and maintaining the monsters. However, used properly, the big guns could achieve results. These useful situations involved an investment of well-defended fortresses such as at Sevastopol, where they helped defeat the Soviets, and Leningrad, where they didn't.

When the Allies invaded southern Italy at Salerno and Anzio, the Germans hemmed them in for a while and brought up the big guns. There is a film of the German gunners happily firing away their big guns at the Yankees on their beachhead and that contributed to the war's highest psychosis rate in the US Army. Obsolete or not, you didn't want to be sitting on the coast with a railway gun firing at you. There literally was nowhere to hide, and your survival was a matter of random chance.

Big guns didn't disappear after World War II. Gerald Bull, a Canadian designer, kept alive the faith into the 1990s. He even wanted to launch satellites into Outer Space using big guns. The truth is, though, that technology already had passed the biggest of these guns by in the 1940s. They were better targets than weapons. That didn't stop the Germans, though. Hitler liked his big guns.