Everybody remembers the Greatest Hits of World War II: Normandy, Stalingrad, Iwo Jima, Dunkirk. Those names have been engraved into the national and world consciousness and likely will never be erased. Then, there are places like Tarawa and Peleliu.

You don't win wars by just rambling from one epic confrontation to another. You win them by slogging through forgotten pest-holes that nobody cared about before the war, and nobody will care about after the war. If you lose a leg on Omaha Beach, you're a venerated hero and you go back every year to be amongst the Presidents and the Prime Ministers; if you lose a leg on Peleliu, well, you were in some damn battle and lost a leg. Nobody will be giving speeches on the tarmac of Peleliu airfield a hundred years after the battle there, and that's a fact.

Peleliu is part of the nation of Palau, which nobody in 1944 had ever heard of, either. Admiral Nimitz was taking his island-hopping campaign westerly while General MacArthur camp up from the south. MacArthur's strategy had the advantage of being mostly a land-based campaign, with only a few hops from one large island to another. The capture of Peleliu would, in theory, provide some flank support for MacArthur's plan to advance to the Philippines.

Admiral Nimitz's plan promised a quicker advance along a chain of small islands but put extreme pressure on his marines, who were forced to storm one gloomy beach after another. Ultimately, Nimitz and MacArthur got their men to the same destination at the same time, and each left an awful lot of young men in jungles strewn across the Pacific. Peleliu was just one stopping point for Nimitz that led to another. It was quickly forgotten by just about everybody except the families of those who stayed there forever.

The 1st Marine Division had gone through the tortures of Hell on Guadalcanal, losing more men to sickness and disease than to the Japanese jungle fighters. That had led to the Battle of Cape Gloucester, which also was no picnic. What it all meant was that the division only activated in February 1941, was well-seasoned once it was put on the barges to hit another beach, this time at Peleliu.

The Japanese had given up their plans for the advance by September 1944 and were forming island hedgehogs. The strategy had a name - "endurance engagements" - and what it entailed was putting a bunch of guys on some rock and telling them they were on their own, and that they could either keep the rock or jump into the sea, but either way they weren't coming home. If you surrendered, you might as well never return to Japan, where you would be called a traitor and a coward. So, almost nobody did.

If they did somehow survive the battle, one way or the other, they would become pariahs at home and be shunned by everyone. Even if you simply lost a battle through sheer chance and events outside your control, such as Admiral Nagumo at Midway, you would become toxic and ultimately be sent to some rock to "command" and wait for the Marines and the battleships to show up and signal your doom. Since surrender was inimical to the Japanese martial spirit, this didn't leave a lot of choices. Fighting desperate men with no fall-back position is one of the most difficult battles possible, and this is what the 1st Marine Division was facing. Again.

The battle was officially known as Operation Stalemate II, but the survivors still call it The Forgotten Battle. It was one of the last big Pacific battles of World War II because the Japanese still thought they had a chance, and also one of the bloodiest. Even the names associated with this small coral strip of land in the Palau islands sound hostile and discordant: Bloody Nose Ridge, the Pocket, Five Sisters, Five Brothers or the China Wall.

Colonel Kunio Nakagawa - the Japanese didn't even send a General or Admiral to lead at Peleliu, even they thought it was a nothing in the vast expanse of the Pacific - based his defenses on Umurbrogol. This was a classic Japanese defensive strategy, the mountain riddled with 500 limestone caves and mine shafts that gave the defenders protection from the inevitable naval bombardment that preceded every US landing. The engineers had built them up a bit with steel doors and such to make the "fortresses," but everybody involved knew their real ultimate purpose: as crypts for the dead.

The marines came ashore in the usual way, leaving their collection point at Pavuvu near Guadalcanal on September 4, 1944.

A bunch of battleships and cruisers softened up the island beginning on September 12, and on 15 September 1944, the landings began. They were firing 16-inch shells, which made a lot of noise but didn't bother the defenders too much, bottled up in their limestone caves on the 6 square mile island.

The main Peleliu airstrip was a good, hard-surfaced field, capable of launching long-range fighter-bombers against the Philippines and protecting naval vessels in the vicinity. Six miles long and two miles wide, Peleliu has a rugged terrain. Like many Pacific atolls, it has a layer of thin soil laid atop coral and limestone. What that means for practical military purposes is that it is difficult to dig trenches for cover, and you stand a good chance of getting huge gouges in your extremities when you "hit the dirt." It also can make burying the dead an issue - and that did become an issue.

The tree-covered Umurbrogol ridges lie about 1000 yards from the beaches. They form a series of low, jagged peaks along the island's midsection, effectively bisecting it. After watching the US Marines debark on a string of beaches near the vital airfield, the Japanese in their limestone caves got down to business. The defenders opened up their steel doors and started blasting away with hidden artillery that the naval spotters couldn't have spotted. 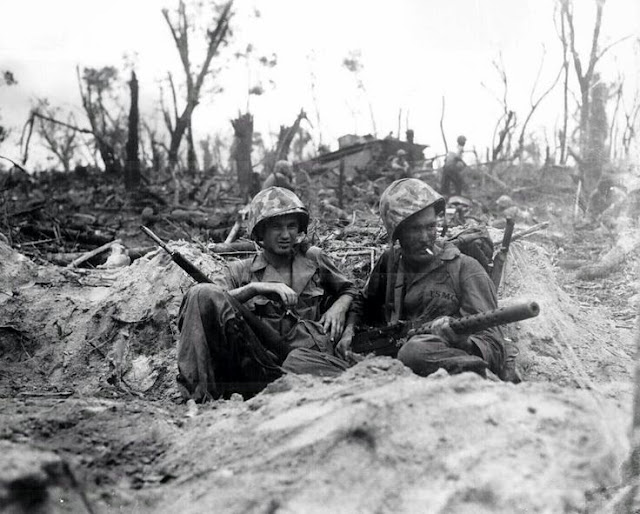 A number of landing craft were hit, and many marines had to get ashore in full battle gear through sharp coral in deep water with the Japanese firing at them. It wasn't fun at all, but the landing was a success and a 2-mile beachhead was taken.

After that, it was the usual, grinding exploitation and then the mop-up operation, moving steadily inland while looking over your shoulder for snipers and hitting the deck when artillery rounds whistled in. Taking the airfield on the second day, the Marines then turned toward the mountain. Now with air support from Marine F4U Corsairs operating from the airfield, the island was secure, but the marines had to stop the deadly enfilade fire from the mountain.

Since air attack against mountainsides is extremely difficult, the only effective way to do that was a step-by-step advance on the ground from cave to cave. This became known as the battle for "The Point," and it turned into hand-to-hand combat.

Even after the Point, the island still wasn't suppressed. Further north, the surviving Japanese regrouped behind a hill later called "Bloody Nose Ridge." The marines were taking so many casualties and became so over-extended that they occasionally ran out of ammunition and had to resort to fighting off the Japanese with knives and fists.

The island wasn't pacified until the end of November when Nakagawa finally threw in the towel and committed Hara-kiri, something he no doubt knew all along was the only way out.

Strangely enough, even that wasn't the end of things. Unbeknownst to the Americans, the Japanese remained on the island in the caves and the jungle. Not until April 22, 1947, did they finally surrender after years of living off the land.

The 1st Marine Division suffered over 6500 casualties and was out of action until the following April, while the 81st Infantry Division which came along later (the standard practice) suffered 3300 casualties. 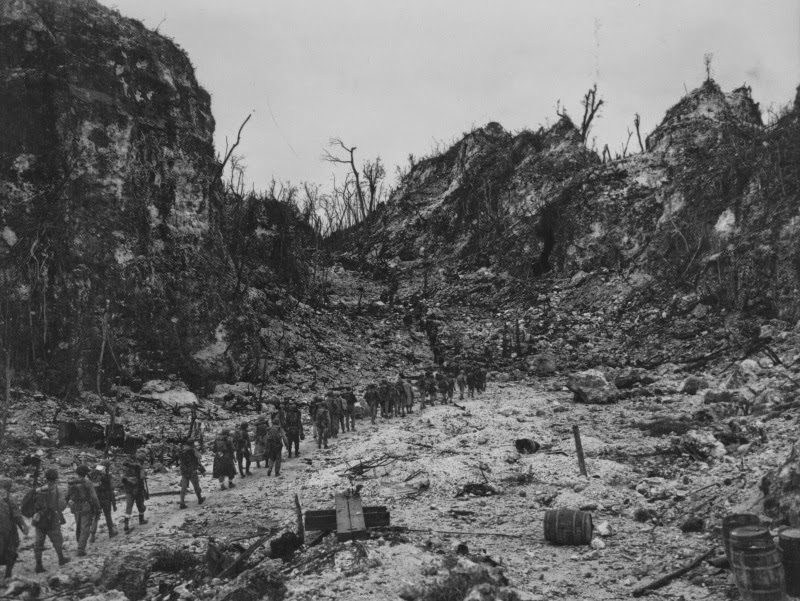 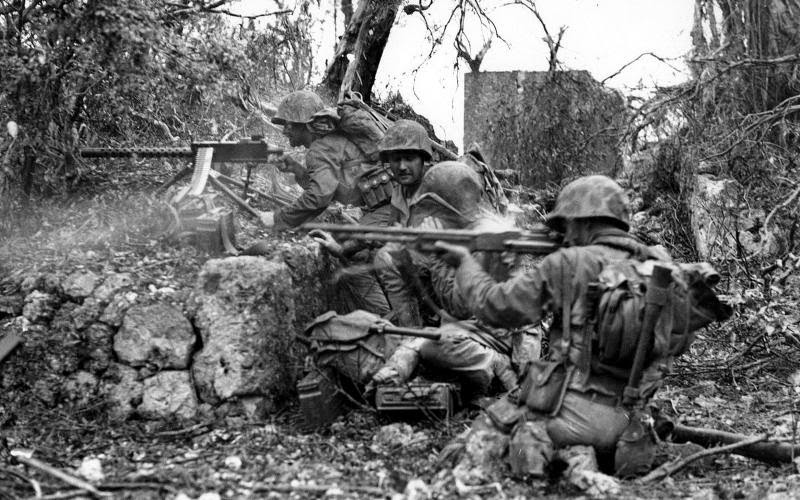 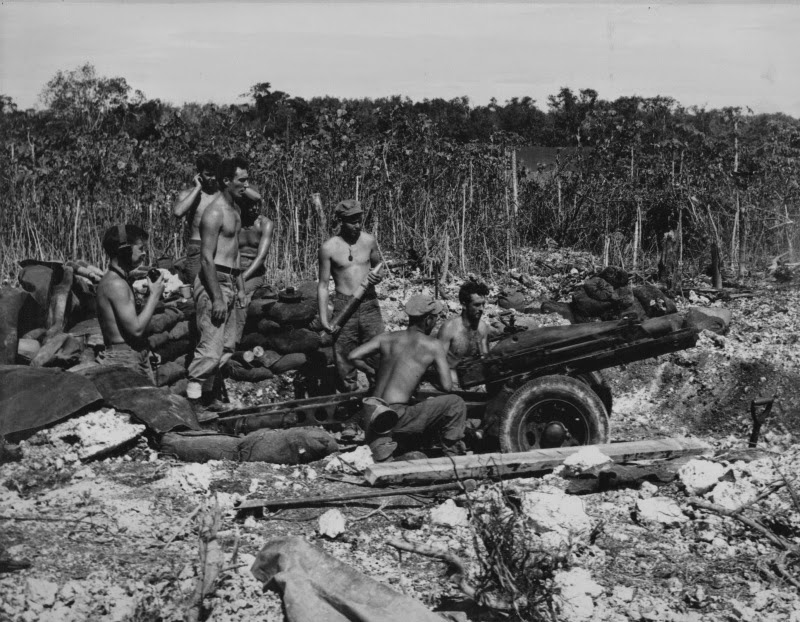 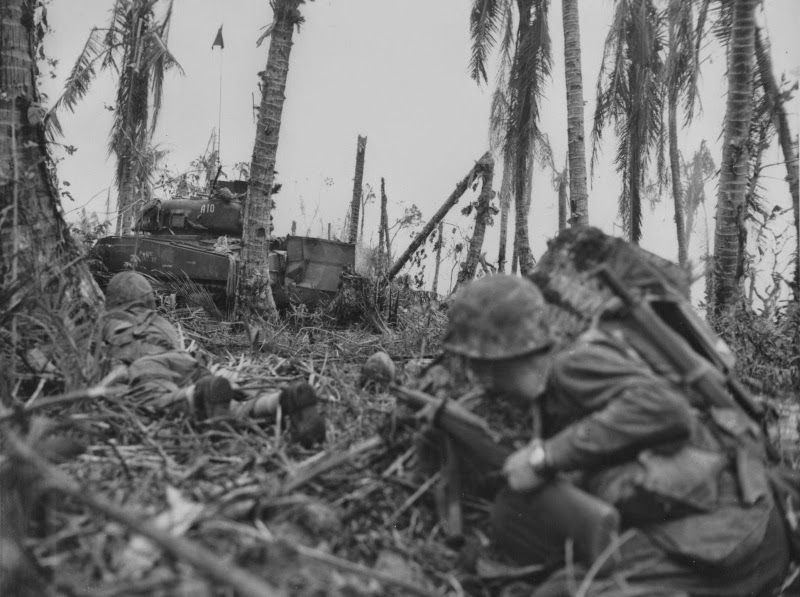 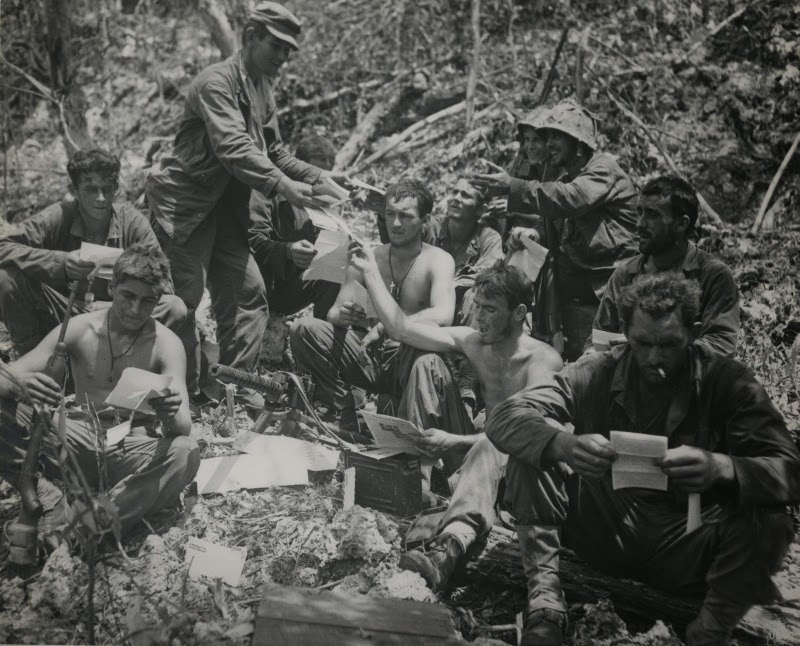 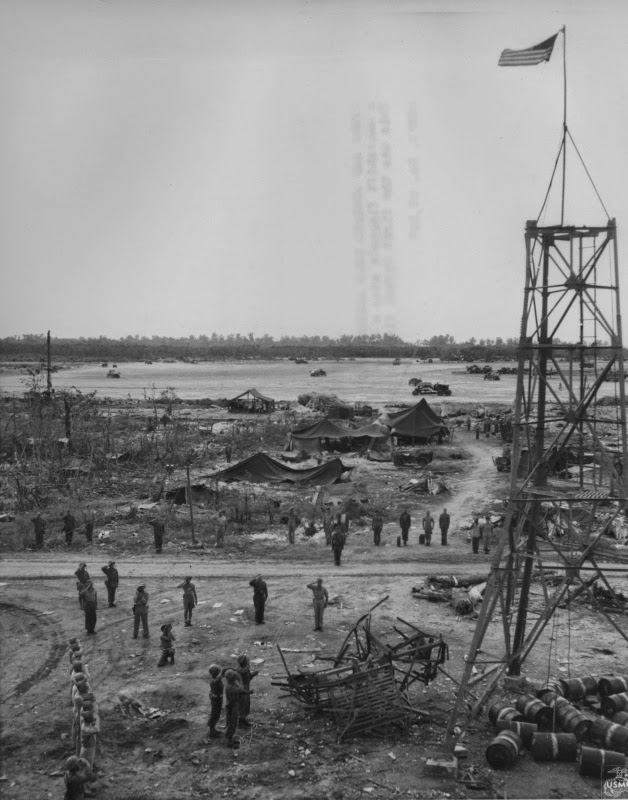 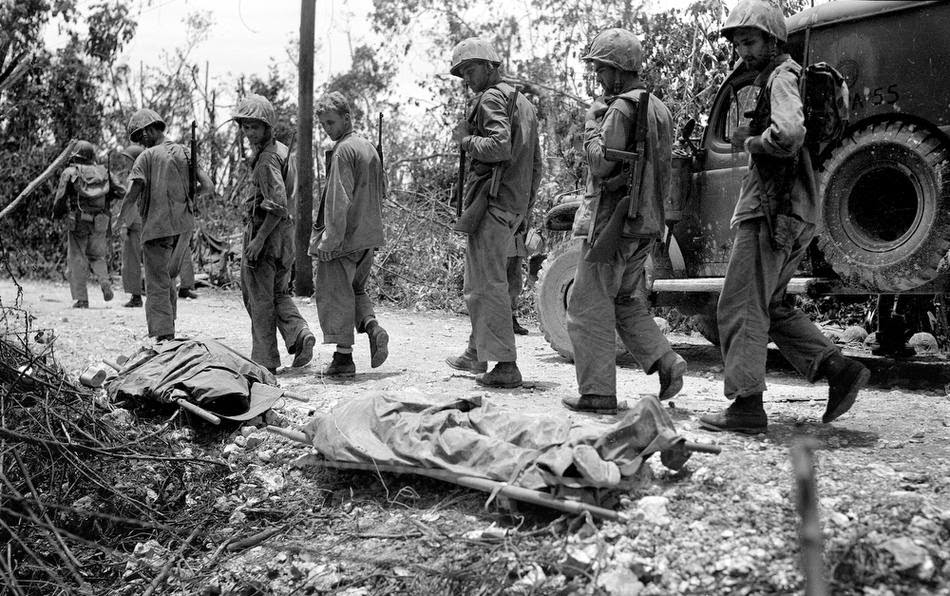 One last thought: the graves of the roughly 10,200 Japanese soldiers and support personnel on Peleliu are unmarked and their locations unknown. Many of the Japanese were simply sealed in caves and bypassed, left to die. There supposedly is a mass grave of Japanese somewhere on the island, and all that is known about its location stems from a random 11 January 1945 map that was found at a small U.S. Navy Construction Battalion ("Seabee") museum in Port Hueneme, Calif with the notation "Jap Cemetery." The map is crude and has that notation in the middle of the island, without other identifying information.

Since its finding, a few other documents also have been found referencing the site. A US Marine Report from December 12, 1944, says that a decent burial should be provided for Japanese officers Major General Gonjiro Murai and Colonel Kunio Nakagawa, who both had committed suicide. Apparently, there was a mass burial by a bulldozer of other Japanese near Nakagawa's grave, which was marked in 1944, but now also is lost. Some logs were placed as boundary markers for the Japanese cemetery. Vegetation grows quickly in the tropics, and trying to find anything in the jungle is extremely difficult.

There are two prime suspected locations: an antitank ditch on the southwest coast of Peleliu, and a marshy area, the one marked on the map, on the opposite coast not far from Bloody Nose Ridge. The map is crude, and it may simply refer to a pre-war cemetery for all anyone knows. To date, the Japanese graves have not been found. All of the US war dead have been removed from the island, though the site of the original US cemetery remains.