Here we have color pictures of the military forces of the Empire of Japan as they approached defeat. Some of these photos appear to be color in the original, and others appear to be colorized. As always, no guarantees are made as to the original nature of any photo here. It is best to assume that all photos are colorized unless an original color source is definitively established. 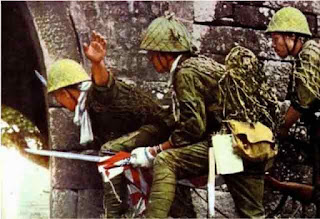 The Japanese turned to the defensive following their heavy naval losses at Midway in June 1942 and the American invasion of Guadalcanal in August 1942. Days of expansion turned into nightmarish counterattacks that almost never succeeded.

Things just got worse and worse as the United States brought its economic might to bear. By late 1944, the Japanese were organizing suicide squadrons which had some success at first.

Sacrificing brave pilots, however, proved ineffective as the Americans developed countermeasures. These included stationing destroyers in picket lines to give aircraft carriers time to launch their defending fighters before the suicide planes could approach.

The Japanese did keep planes in the air right to the end. However, they were no match for the air fleets of the US Army Air Force.

The atomic bombs on Hiroshima and Nagasaki settled the issue once and for all.

You know all about the Japanese surrender, right? It took place on that battleship parked in Tokyo Bay and everybody signed a big book and then went home. Well, sure, that was the official surrender. But there was an entirely different and much more meaningful event two weeks prior to the Toky Bay affair which was the real Japanese surrender.

Obviously, the Japanese surrender in mid-August 1944 was a very big deal, and war correspondents covered it in great detail. The Japanese delegation arrived at American-held Ie Shima on 19 August 1945 aboard two bombers. These photos appear to be original color photos. 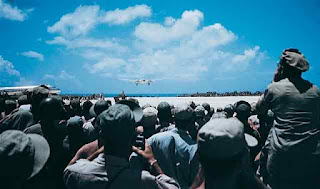 Above, the first Japanese plane arrives at the bleached coral airfield at Ie Shima with thousands of onlookers. There is an all-metal Douglas C-54 waiting at left for the delegation's arrival.

The captain of the second Mitsubishi Betty can be seen standing up to direct his co-pilot so as not to hit the crowd lining the runway.

The pilot of the second Green Cross Betty parked the plane near the awaiting C-54 transports. In doing so, the plane's engines blasted the crowd lining the runway. The waiting men in the photo above have their backs turned against the dust storm. The two Bettys were slightly different - this one does not have a window panel just behind the nose glazing under the chin of the aircraft like the first plane. 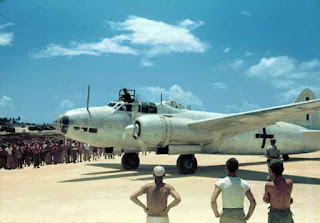 The Americans did not know what to expect. The Japanese plane which arrived at Ie Shima was a specially painted G4M Betty bomber. The Americans took the delegates to Manila aboard the Douglas C-54 to meet with General McArthur for peace talks. Note that the plane has been painted white with green crosses, per U.S. instructions. This was done very hastily and crudely due to the exigencies of the situation. The Americans did not specify what shade of green, so here the crosses were dark green and appear black. Other planes painted elsewhere had much lighter green crosses.

The planes, incidentally, never returned to Japan and was stripped at Ie Shima by US Army Air Force personnel, some of whom took parts of the plane home as souvenirs. 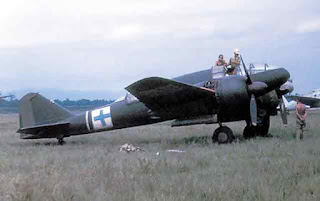 The practice of painting surrendering Japanese aircraft white with green crosses soon spread to many other Japanese units. Above a Japanese ground crew painted a Mitsubishi Ki-46 Dinah. Note that the crew either had only a small amount of white paint or they didn’t have time to paint the whole aircraft. The Dinah was photographed at Atsugi Airfield, which is a naval air base located near the cities of Yamato and Ayase in Kanagawa Prefecture, Japan.

All of these events were the real surrender - the signing of surrender documents on the USS Missouri on 2 September 1945 was a formality long after hostilities had ceased. 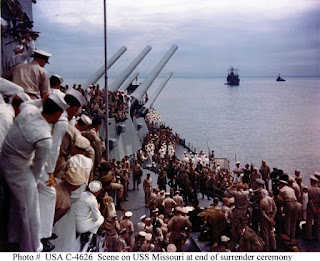 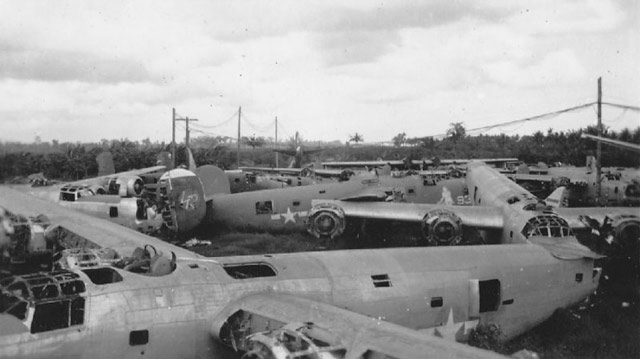