Why Did Soldiers Exit From the Front of Landing Craft?

The Best Solution to a Bad Situation

Everybody has seen pictures of Allied landing craft disgorging soldiers directly onto beaches. Obviously, that was dangerous for the soldiers because the defenders were firing directly at them. So, the question arises, why did the soldiers run directly through the surf toward the men firing at them?

There were at least half a dozen reasons why soldiers exited from the front of their landing craft rather than the rear. We'll get to them below, but first, let's learn about the landing craft themselves.

First, a little background. The United States began World War II without any purpose-built landing craft. That changed quickly. Andrew Jackson Higgins, a Louisiana lumberman who began designing boats for his business in the 1930s, operated in the shallow waters of the Mississippi Delta. Higgins designed boats that rode high in the water and could unload directly onshore, and he began submitting proposals in 1938. His first designs had soldiers disembark over the sides, but this exposed them to fire.

Still, this design was better than anything else, and in 1940 Higgins sold some landing craft to the British for Commandos (who called them R-boats). Higgins continued working on his designs in response to feedback. He filed his classic design for a military landing craft with the U.S. Patent Office on December 8, 1941 – the day after the Japanese attacked Pearl Harbor - for landing craft. This patent was granted on 15 February 1944. This design had a ramp in the front.

The United States military embraced Higgins' design. Prototypes passed a series of tests at Newport News, Virginia, on 26 May 1941. The U.S. Navy Marines then contracted with Higgins Industries to build 20,000 different landing craft under a variety of acronyms. These included LCA (Landing Craft Assault), LCM (Landing Craft Mechanized), LCU (Landing Craft Utility), LCT (Landing Craft Tank), and 36-foot LCVPs (Landing Craft, Vehicle and Personnel). The entire class of landing craft took the general name "Higgins boats." There were some variations - the LCA did not transport vehicles because it was an underpowered pre-war British design, and the amphibious LVT-4 had a rear ramp because it could just drive up on shore - but the standard format was a ramp in the front of the landing craft and the ability to transport vehicles.

Andrew Higgins ... is the man who won the war for us. ... If Higgins had not designed and built those LCVPs, we never could have landed over an open beach. The whole strategy of the war would have been different.

That's quite a testimonial.

Why Troops Disembarked From the Front

As mentioned above, it wasn't obvious that troops should disembark from the front of the landing craft. In fact, Higgins' initial designs had them climbing over the sides into the water. Real-world experience, though, showed this was dangerous. After careful study, the Marines asked Higgins to install a ramp in the bows, which he did in the design he submitted on 8 December 1941. Below are the reasons why having a landing ramp in the front was necessary.

First, the men exited from the front because that is where the landing ramps were. They were in the bows of the boats. It wouldn’t make much sense to have them leave on the end opposite of where the ramps were. You’d have to go back to the landing craft designers at both Higgins Industries and the Marine Corps and ask them why they designed them that way (actually, having ramps at both ends was considered and rejected).

To answer for them, the ramps were in the front in most designs because, among other reasons, the landing craft were intended to land vehicles as well as men. The LCVP, for instance, could land either 36 troops or a dozen troops and one Jeep. You wouldn’t want to land your vehicles in deep water. These were multi-purpose craft. Since the ramps were built in the front, that is how the landing craft was designed to always land and be exited regardless of whether it actually was carrying vehicles on a particular trip.
Second, beaches tend to get deeper the further out from shore you get. The landing craft ships were quite long and not just little rowboats. The LCT Mark 5 was 119-feet (36 m) long with a six-foot draft. If you go that far out into the water (and the landing craft didn’t always make it all the way to the actual shoreline - in fact, they often had difficulties getting close to the beach at all, including because of sandbars and planted obstacles to prevent that) it gets quite deep. Even the smaller LCVP had a draft forward of about 12 inches and 3 1/2 feet aft. For many guys, 3 1/2 feet would be over waist-high. Just going into the water at the depth of the ship's rear draft meant that you could drown. You don’t want to land in deep water. Why? That leads to our next point.

Third, the men who landed on D-Day, at Sicily, at Anzio, and at various other places weren’t wearing bathing suits. They had full gear and packs. Some of them were carrying mortars and machine-gun parts and radio gear and flamethrowers and all sorts of heavy stuff and they all had food and clothes and all that normal stuff. Stuff that you could not swim with and which you didn’t really want to get wet (and you don’t want all your spare socks getting wet, either, that’s a real drag, they never dry out). Many men carried 60 pounds (27 kg) of equipment. If the water was over your head or you stumbled in neck-deep water, you drowned - just like that. So, you wanted to go onto or very near dry land and not sink neck-deep (or deeper) 119 feet out into the ocean (or even the 36 feet of the smaller LCVP). And there were cases of men drowning in the water after leaving the front of the boat - imagine the situation if they landed from the rear in much deeper water.

Fourth, the landing craft was not waiting around so their crew could have lunch breaks and take a mandated 15-minute break and so forth. They were not beached for the afternoon (on the initial landings). This would, among many other things, have made the landing craft excellent targets for shore artillery and other things they didn’t want to encounter. You didn’t want to be right behind a magnet for artillery fire. Landing craft were not expendable once-and-done ships. They were designed to be re-used many times. Their crews did not want to attract enemy fire. So they left - as quickly as possible. Or, if they didn't - as at Dieppe - they didn't leave at all and were captured or destroyed. The Allies learned many of these kinds of hard lessons at Dieppe.

Fifth, the mission of the landing craft was to go back and get more troops for a second wave. Each group of men did not have their own personal landing craft which they could go back to throughout the day for snacks and maybe a drink and listen to the Hit Parade on the radio. The idea was for the landing craft to go back immediately and get more men from the big ships offshore to help out the first wave. So, any soldiers who thought they could just hide out behind the landing craft until things “quieted down” had another thing coming to them - which included the dangers of the propeller which would have made it quite uncomfortable back there.

Sixth, once the landing craft left, or even if it didn’t, any men hiding behind it still would have even further to go ashore in the face of enemy fire than if they stepped out the front as they did. And, this would have happened after all chances of a surprise landing where the men could just run ashore before the enemy could react had disappeared. The idea was to get ashore quickly because there was some cover on the shore and you could dig yourself in whereas in the water you were sticking out, had no protection whatsoever, and were an easy target for a burst of fire. At Tarawa in the Pacific, the men had to land way out in the lagoon due to very poor planning and wade in and they were mowed down in a catastrophic landing that claimed a thousand lives. 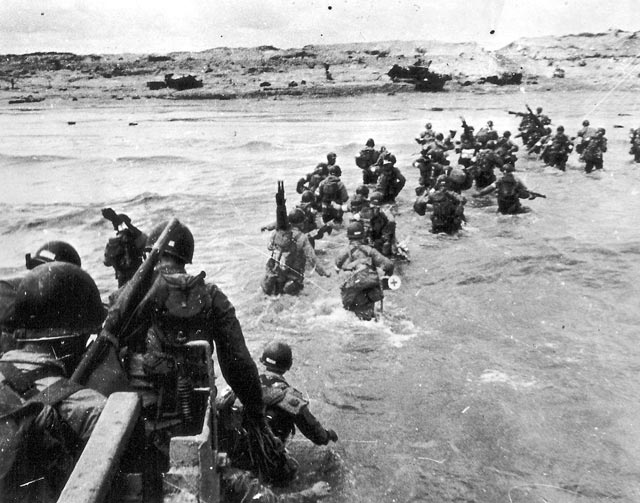