The Junkers Ju 87 or Stuka (from Sturzkampfflugzeug, "dive bomber") was a two-man (pilot and rear gunner) German ground-attack aircraft during World War II. It was the best tank destroyer of World War II by either side. 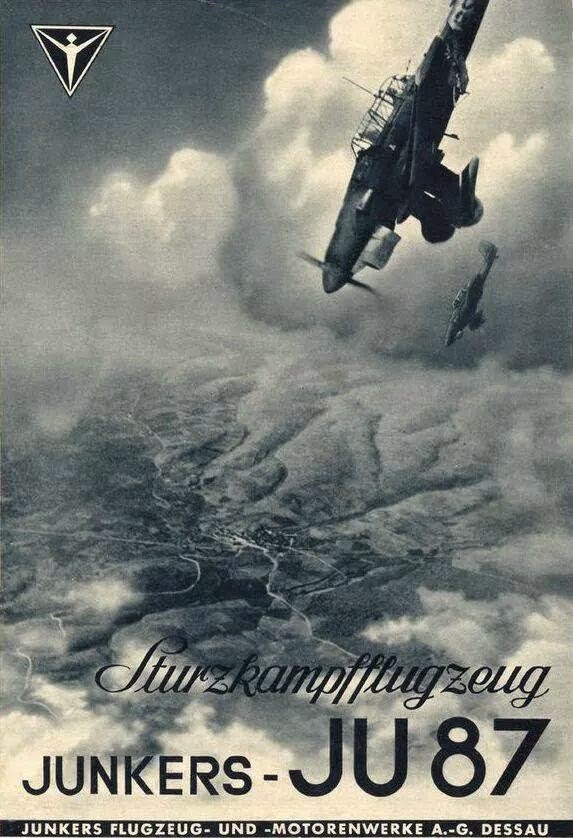 The Stuka was a reliable workhorse, much like the Bf 110. It was not fancy, though it had unique stylistic attributes that enhanced its reputation as a deadly weapon, such as gull wings which made it resemble a bird of prey as it dove upon its victims, and screeching air horns. 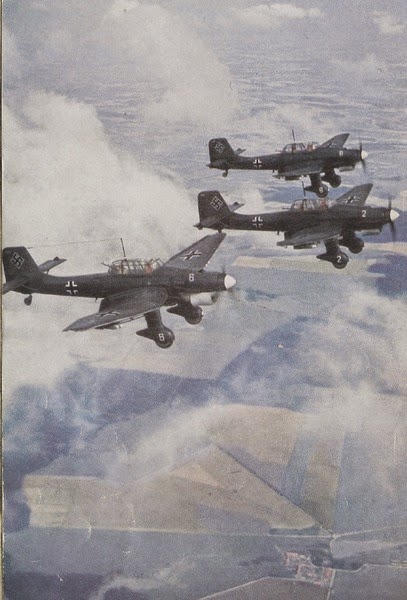 Designed by Hermann Pohlmann, the Stuka first flew in 1935 and at that time had very few peers as a dive bomber.

The Stuka made its combat debut in 1936 as part of the Luftwaffe's Condor Legion during the Spanish Civil War. The Stuka was constantly upgraded throughout its lifespan, which only ended in May 1945.

The Stuka served right up until the last days of the war. Aside from its experiences over England, where it was shot down in droves due to its slow speed and lack of agility, the Stuka was highly successful and highly feared.

When they dived, the Stuka would whistle because of two small propellers on the stalks of the wheels. Thus, they earned the nickname "whistling death."

The Stuka was the most effective ground-attack airplane of World War II. The Luftwaffe was designed before the war to serve a tactical, not strategic, function, and the Stuka was the ultimate tactical weapon. 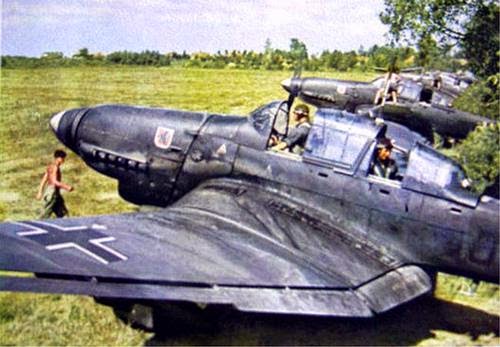 The Stuka was intended to help the troops advance by serving as highly mobile supporting artillery, and it did this effectively. Other roles were assigned to it as time went on, but infantry support was its primary role. During the days of the so-called 'Blitzkrieg,' this worked wonderfully.

Thus, the Junkers Ju 87 “Sturzkampfbomber,” or Stuka, was a feared weapon in Germany’s arsenal. It became a symbol of German aggression with its trademark siren, known as “Jericho trumpets,” blaring as the aircraft hurtled down to its target.

However, few survived the war. “The Stuka as an exhibit is incredibly important to us because there are hardly any left,” said Sebastian Bangert, spokesman for the Military History Museum in Berlin.


Stukas defined the 'sound' for dive-bombers forever after. The screaming roar of the planes as they dove toward Allied formations was terrifying.

The German public seemed quite comfortable with the Stuka. In fact, the Stuka was even shown at times with anthropomorphic features, as in the 3 February 1942 Adler Magazine cover shown above, sort of like a German Scooby Doo. The Stuka was the common soldier's best friend, the best way to clear opposition immediately ahead. It was reliable, like an old friend or faithful dog, ready to help out in even the most brutal winter conditions.

The Stuka was made technically obsolete by the Focke-Wulf FW 190 and other, better dive-bombers. Late in the war, RAF and American pilots destroyed Stukas in droves in their Spitfires and P-51s whenever they came across one. 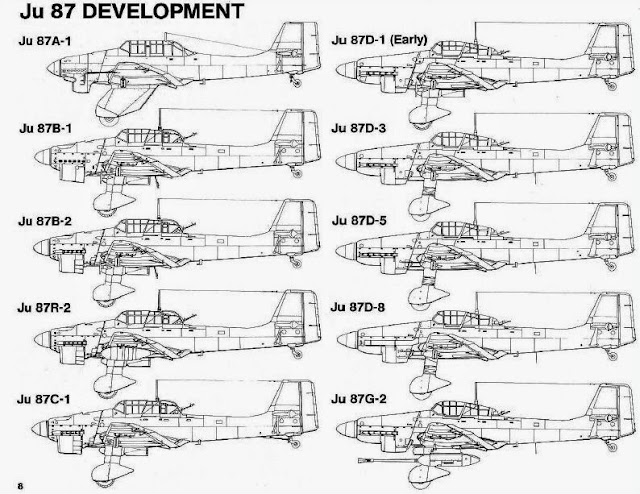 However, while outmoded, the Stuka still performed well under proper circumstances, particularly in an anti-tank role. While the bulky airframe placed definitive limits on flight performance, as a bomb deliverer and cannon platform it was second to none. Stukas also filled a need because other, better aircraft such as the Focke Wulf 190 were needed in other roles, and could be used to provide fighter cover for the much slower Stukas. Thus, the Stuka remained in use until the very last day of the war, and was raining death on the advancing British and Russians alike in the closing days of the war.

While easily shot down, Stukas operated low to the ground and, in the hands of a skilled pilot, could be crash-landed without too much difficulty. Thus, they were a "safe" mount. Some Stuka pilots survived literally dozens of crashes. One of the clearest lessons of World War II, and one which is forgotten is that older technology that is more reliable and sturdier than fancy cutting edge systems is extremely valuable. Stukas are a prime example. 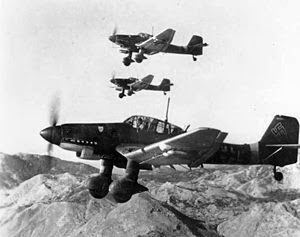 Stukas served on all fronts in all climes. They were hardy planes, reliable and tough. 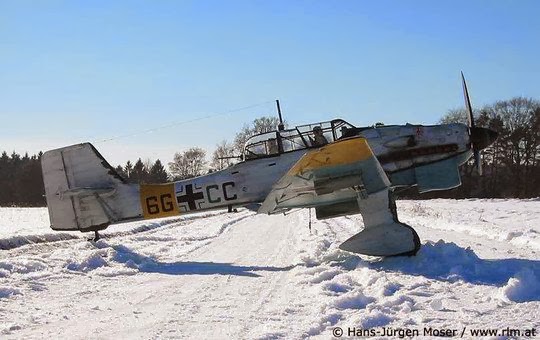 Due to their design, Stukas had a tendency to flip over when landing or even taking off on some rough ground. Note that, in the photo below, the pilot taking off did not even have a chance to release his bombs, and is extremely lucky (assuming that he survived, which from the looks of it is unlikely) that they did not go off. Note the two smaller bombs on each wing and the larger, central bomb. They appear to be a single SC 500 kg (1,100 lb) bomb under the fuselage and four SC 50 kg (110 lb) bombs under the wings, making this perhaps a Ju-87C. We know this was a take-off attempt because he would have ditched the bombs before trying to land as a security precaution. 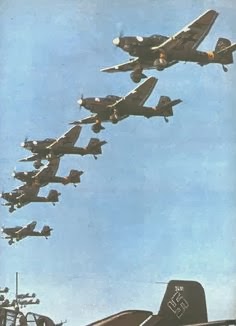 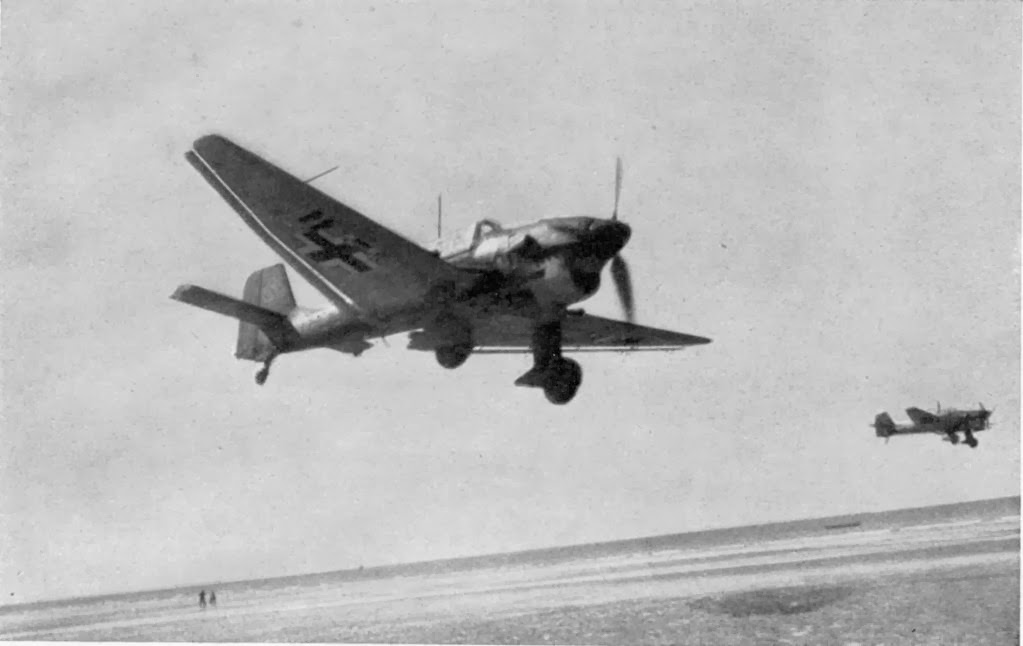 Below, Flak-Kanoniere of the 2. SS-Panzer-Division 'Das Reich' wave a flag to alert the Stuka pilots above them of their position at the frontline in the region of Belgorod, Russia. To the left, an Sd.Kfz. 10/5 carried the 2 cm FlaK 30. This was on 3 August 1943. German aircraft were still pre-eminent at this point, just after the Kursk operation, but not for much longer. Control of the skies in the East is generally assumed to have occurred during the battle of Kursk in July 1943, but it was more of a gradual process. 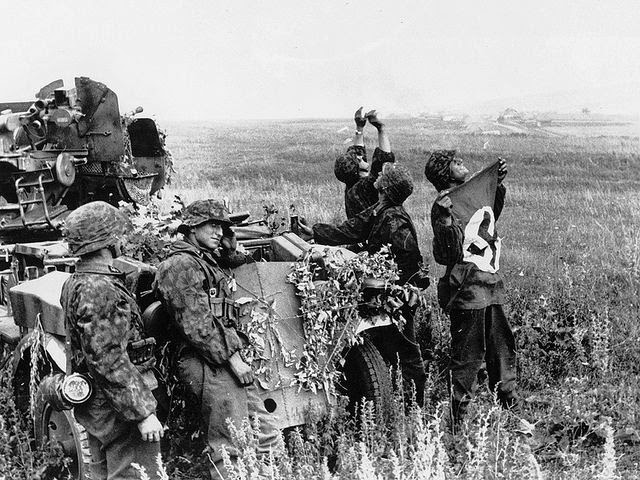 Below, Stuka dive bombers, part of the famed Condor Legion, in flight above Spain on May 30, 1939, during the Spanish Civil War. The black-and-white "X" on the tail and wings is Saint Andrew's Cross, the insignia of Franco's Nationalist Air Force. The Condor Legion was composed of volunteers from the German Army and Air Force. At this point, the Stuka was state-of-the-art. 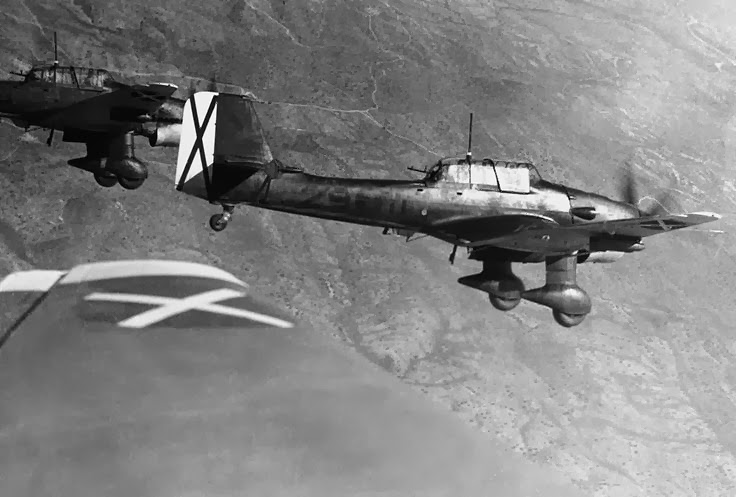 Below, HMS Gloucester under attack by Ju-87 Stukas. May 1941. It is very tough to hit a moving ship with a bomb even with a dive bomber, something learned by all air forces of World War II. However, the Americans at Midway a year later certainly managed it.

Below, German Colonel General (later Field Marshal) Erhard Milch inspecting Luftwaffe pilots, Trondheim, Norway, 23 Apr 1940; note Ju 87 Stuka dive bombers in background. This was during the invasion of Norway, with the Battle of France only weeks away.

The Luftwaffe had an obsession with dive bomber capability that worked to its detriment. Below is a picture of the He-177. The Heinkel He 177 Greif was called the "Flaming Coffin" or "Flaming Fireworks" by its pilots due to its serious engine problems, caused by the engines' odd configuration in their wing nacelles (two engines were placed in a series, one facing fore, one aft, on each wing, for a total of four engines in two nacelles. While ostensibly a "clever" design, this created serious cooling, tuning, vibrational and other problems.) 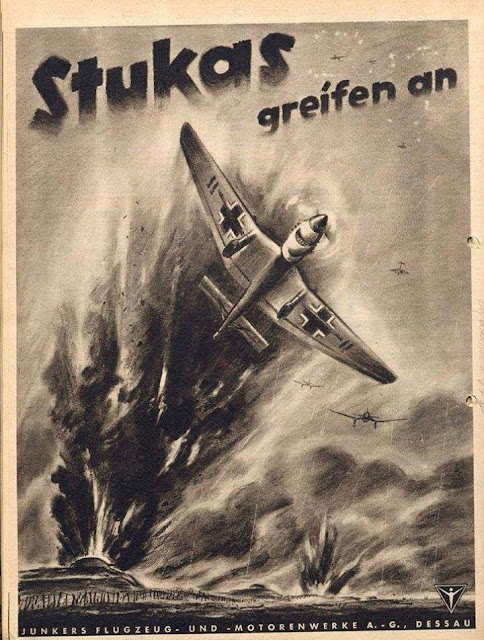 A natural long-range bomber, the He177 was wrongly designated a dive bomber to perform a milder version of the Stuka role. The standing rule was that all German bombers had to be capable of tactical Army support in this fashion, which was ridiculous for a heavy bomber design. In common with most German bombers except the Stuka, the He 177 was grounded from the summer of 1944 on as Allied bombing crippled German fuel production and aircraft plants. German pilots were not displeased by the grounding.

The Ju 87 was an extremely versatile aircraft. It even was chosen to fly off the Graf Zeppelin, the Kriegsmarine aircraft carrier that came close to completion. This rare version had folding wings, but the carrier project was shelved due to the war situation.

Rudel flew some 2,530 combat missions and was shot down by ground fire 32 times, several times narrowly evading capture (which, since the Soviets had placed a bounty on his head, likely would have led to his being shot). He was the most decorated serviceman of all the fighting arms of the German armed forces, and deserved it.

Below, Rudel demonstrates how to attack a T-34 tank's rear engine compartment to destroy it. He was a tough man - he was injured numerous times and flew many missions wearing a plaster cast on his leg.

After spending eleven months in prisoner camps following the war, Rudel was released by the Americans. He moved to Argentina in 1948 but soon returned to Germany, where he served as a consultant to the Luftwaffe and became a successful businessman. He was revered by fellow servicemen long after the war, and Rudel died in Rosenheim in 1982. 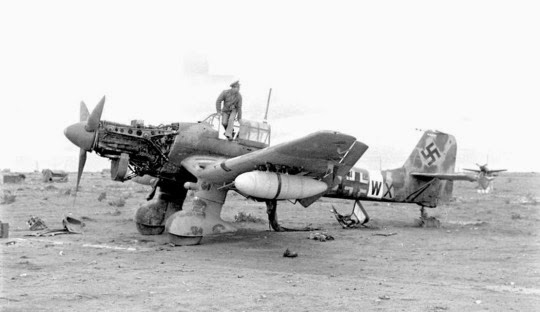 The legend, though, had one more chapter. Rudel received surreptitious full (and controversial) military honors at his funeral. It was just a "coincidence" that several modern Luftwaffe fighter jets overflew the service at just the right moment. At least, that is what the pilots claimed. 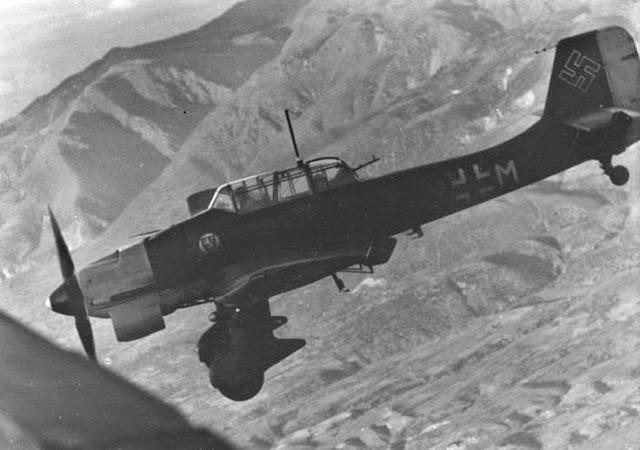 Below is the tank-buster version of the Stuka, the Ju-87G, which was quite effective. This was the type of equipment that Rudel used late in the war. The Ju 87 G-1 "Kanonenvogel" has twin Bordkanone BK 3,7, 37 mm underwing gun pods. It was the final variant of the aircraft and served on the Eastern Front with great effect.

The Ju 87 earned its fierce reputation and was one of the most effective aircraft of World War II.