Some weapons systems have fearsome names that greatly exaggerate their actual influence on events. Such is the case with the German World War II Sturmtiger ("Assault Tiger").

Sturmtiger (or technically the "Sturmmörserwagen 606/4 mit 38 cm RW 61") was a World War II German assault gun built on the Tiger I chassis. 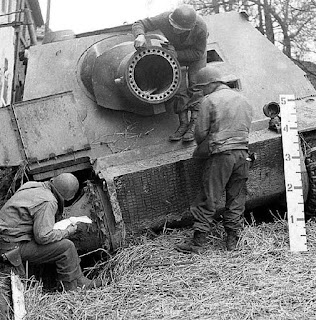 The Sturmtiger's purpose was to provide infantry support fire. It did this quite well when used in its niche role. The last thing you wanted to see if you were defending a building was a Sturmtiger advancing with its gun pointed at you.

The Germans had a lot of infantry support vehicles. In fact, that was probably the class of armored vehicles in which the Wehrmacht truly excelled throughout the war. 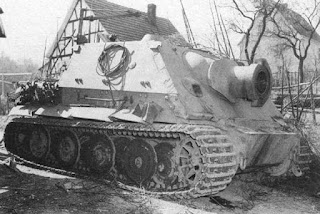 These included the Ferdinand (or Elefant), the Marder class of vehicles, the Hummel, the Wespe, the Grille, the Heuschrecke, the Brummbär, the Nashorn, and many others including, of course, all of the tanks. If you had to pick one area where the German military can be said to have had the greatest variety of equipment, infantry support vehicles would be a good candidate. 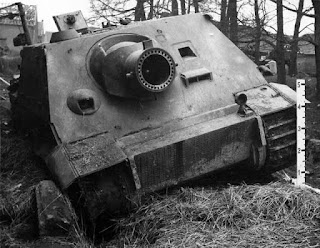 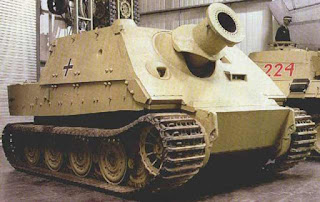 The Sturmtiger's primary task was to provide heavy fire support for infantry units fighting in urban areas by destroying large defensive structures with a single round of ammunition. 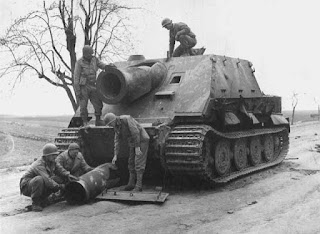 The experience at Stalingrad showed the Wehrmacht generals that Soviet troops were experts at defending large buildings. Subduing a Soviet-held apartment complex and taking it with infantry was time-consuming and costly. Much better to just blow it up. The first prototype was ready in October 1943, when the Wehrmacht already was retreating. 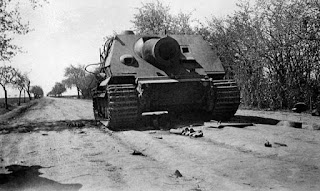 A mobile vehicle that could flatten such obstacles with a single shot would save a lot of German lives and speed up operations. Given that German generals were honored not just for what they achieved, but how quickly they achieved Hitler's objectives, developing an assault gun that had overpowering firepower became a priority.

Sturmtigers certainly did fire a powerful shot. There was a famous incident where a Sturmtiger in Sturmmörserkompanie 1001 near Düren and Euskirchen blew up a bunch of stationary Sherman tanks with one 380mm round. Such fearsome offensive weapons would have come in quite handy at Stalingrad and Leningrad and a number of other famous battles earlier in the war.

There were several drawbacks of the Sturmtiger. For example, its gun was very inaccurate. In order to accurately hit a defined target, the Sturmtiger had to get very close. Again, this would have been acceptable when trying to subdue a city but was much less useful while in retreat. The Sturmtiger also lacked defensive armament, a vulnerability that plagued numerous German infantry support vehicles. There was a mount for a 7.92mm MG 34 machine gun, but that was inadequate against the type of determined opposition that the Sturmtiger was designed to overcome. Thus, the Sturmtiger required a lot of infantry support, something the Wehrmacht did not have in abundance in 1944 and 1945. The ammunition was large and heavy, with only 14 rounds in a basic load and requiring a loading crane. Thus, firing multiple rounds was cumbersome - when you were under attack, you had to make that first round count.

The few Sturmtigers produced in September - December 1944 fought the Warsaw Uprising, the Battle of the Bulge and the Battle of the Reichswald. These were all operations where the Wehrmacht either had to advance quickly to subdue opposition or had to use anything it had in a desperate attempt to survive. 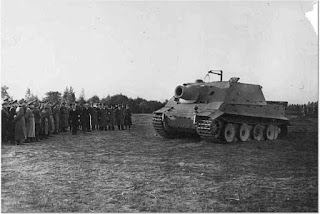 One such incident occurred in March 1945 in one of the Wehrmacht's last offensive operations. Some units (Sturmmörserkompanie 1000 and 1001 which had about seven Sturmtiger total, less operational losses) of Sturmtigers were attached to 6th SS Panzer Army to recover or destroy the famous Bridge at Remagen (the Ludendorff Bridge). The Remagen bridge ultimately did collapse (after it no longer mattered), but due to the combined effect of all attacks on it, not just those of the Sturmtiger. Most credit that "victory" to ferocious Luftwaffe attacks. 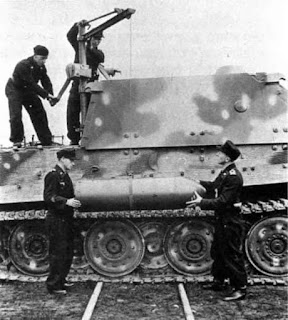 Based on the Tiger I chassis, about 18 or 19 Sturmtigers were completed. They were completed by Alkett beginning in April 1944, but the project required major contributions from Krupp (hulls) and Henschel (chassis assembly). The first three Sturmtigers rolled out of the factory in August 1944. Five more were built in September, and a final five in December. Hitler was very enthusiastic about the Sturmtiger and would have produced many more if he had the means. 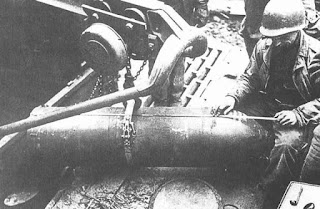 There are a few Sturmtigers known to survive, the best example owned by the Wehrtechnische Studiensammlung in Koblenz. It can be seen at the Deutsches Panzermuseum at Munster. 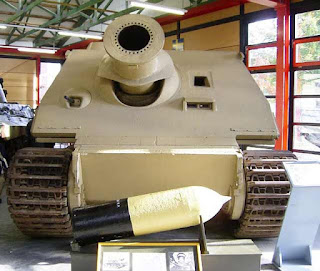 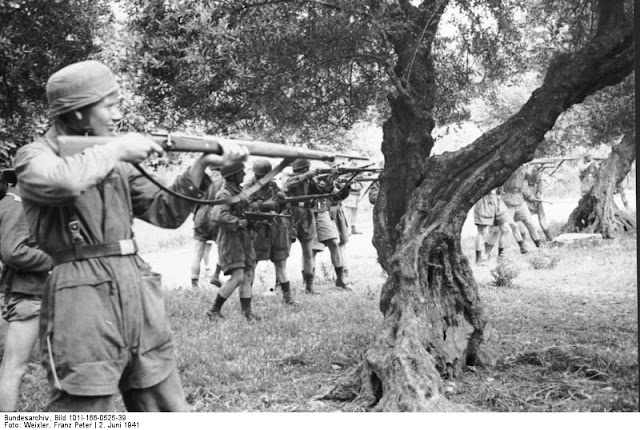