Sinking of the Wilhelm Gustloff


One of the most notorious events of World War II was the sinking of the MV Wilhelm Gustloff. While not a secret, the incident did not receive nearly as much attention over the years as it would have had it not occurred during the last stages of a bitter war. Recently, that has begun to change, but there remains an air of mystery about that night. Recently, books have been written and documentaries made about the Gustloff, so there are ample other resources for those who really want to dive into the incident. However, it still bears reviewing here because of the scale of the tragedy and what it says about the state of the war at the time. 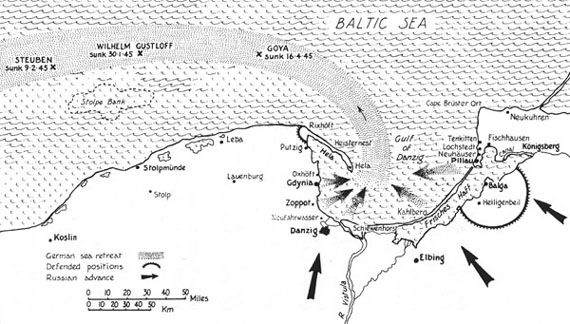 It was late January 1945. German troops in the East Prussia region had been retreating steadily for months, ever since the collapse of Army Group Center around Minsk in June 1944. While the Wehrmacht still had plenty of forces, the Soviets had more. The Germans were spread out in haphazard defensive positions due to Adolf Hitler's attempts to use his remaining forces to hold as much territory as possible rather than consolidate them for maximal defensive efficiency. To the north of Danzig, Army Group Courland was cut off from land communications. To the east, German Fourth Army extended from the coast in a pocket to the southeast. The Soviets were on the coast just east of Danzig at Elbing, so basically every German soldier east of Danzig - Army Group Courland, Fourth Army, and everyone else - was cut off and unlikely to survive. Very little stood between the Soviets and Danzig.


Nobody in East Prussia wanted to stick around for the Soviets. There were 2,300,000 people desperately trying to get behind the defensible Oder River, which was over 300 km to the west. While land communications west from Danzig still were open along the coast, nobody knew how long that might last. There also was virtually no civilian transport to the west, and it was a long walk with all of your belongings in the middle of winter. There was, however, one obvious route available: by sea. Operation Hannibal, the evacuation of non-essential personnel to the west from East Prussia by sea, began on 23 January 1945.


There were still several large German vessels in the Gulf of Danzig that could be used to transport refugees to the west. One of these was the MV Whilhelm Gustloff, a pre-war cruise liner which had been planned to give German workers pleasure cruises. The Gustloff had been tied up at Gotenhafen and used as a barracks for submarine trainees for years. What mattered was that its engines still worked and it could hold a lot of people. Accurate records of its last voyage were not kept, and people flooded aboard on news that the ship was ready to go. Estimates vary wildly, and the exact number of passengers and crew on board will never be known. Best estimates are that around 10,500 people total were on board, mostly civilians, but with some injured troops, some military personnel, and anyone else that could slip aboard.


The Gustloff and a few other smaller ships left the port of Gdynia (Gotenhafen), just to the north of Danzig, shortly after noon on 30 January. It was the 12th anniversary of Hitler's accession to power, which was an ordained holiday in Germany accompanied by radio speeches and the like. Hitler gave his last radio address that day, and he sounded like death warmed over due to the collapsing military situation. The Gustloff set sail in a snowstorm, with ice flows everywhere and the temperature well below freezing. On the one hand, the foul weather might cover the Gustloff's departure from enemy strikes; on the other, though, chances of survival in such extreme weather conditions were minimal should the ship be attacked. The initial destination was Kiel.


The master of the Gustloff, Captain Friedrich Petersen, had two choices: sail close to land, or out in the middle of the Baltic. Neither was guaranteed of success. Against military advice, Petersen decided against sailing close to the coast, which was longer but might be less risky should trouble occur. Instead, he chose a more direct course farther out to sea where he would normally sail in peacetime.


The Germans had ruled the Baltic since the start of the war. The only Soviet naval presence since 1941 had been in Leningrad, protected by the fortified island of Kronstadt. While the Wehrmacht had never captured either place, Soviet vessels had been bottled up there throughout the conflict. By 1945, however, the retreat westward by Army Group North (now Army Group Courland) had removed any inhibitions on the Soviet fleet. The capitulation terms for Finland when it exited the war in late 1944 specified that the Soviets would have use of a naval base there. The Soviet fleet had not caused any problems throughout the war, and none were expected now. But things were about to change. 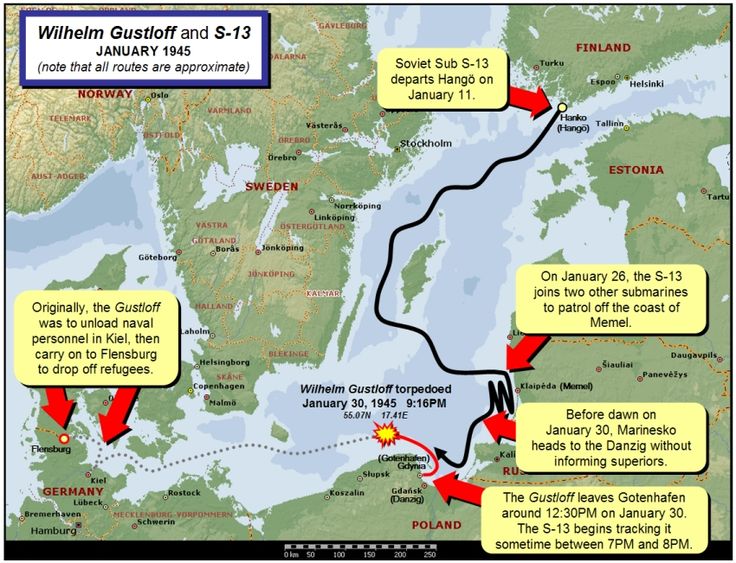 Soviet submarine S-13, under the command of Captain Alexander Marinesko, had left its Finnish base at Hanko in early January and was lurking outside the Gulf of Danzig for just this kind of opportunity. Marinesko was a well-known drunkard (according to his Soviet bosses, at least) who later lost his command due to his vices (or perhaps political unreliability, it is difficult to trust Soviet sources on this point, especially considering what happened to him later). However, Marinesko undeniably also was an excellent Captain. The Gustloff was accompanied by one torpedo boat (originally there had been two, but one had turned back with engine issues), but the naval vessel was completely useless due to defective equipment. The time was well after nightfall, at around 9 p.m., when trouble struck. Petersen had his running lights on due to worries about running into other German vessels, and this made the Gustloff visible for miles. S-13 pumped three torpedoes into the ship, one forward, one midships, and one in the engine room. All power went out immediately and the ship took on a sharp list.


The Gustloff sank quickly; within forty minutes, it was on its side and going under. There was only time to lower one lifeboat, and virtually everybody who could get to the deck soon found themselves in frigid water. The sea was covered with freezing people, in total darkness and with nothing to grab on to. The Kriegsmarine was extremely responsive, at least, and soon had every boat available in the vicinity. A total of nine German vessels managed to pick up 1252 survivors, including some babies (it has been estimated that about half the people on the Gustloff were children). There were reports of some half-frozen people somehow managing to make it to shore, but those are probably apocryphal because the ship was sunk 30 kilometres offshore (the wreckage is well known).


A recent estimate suggests that there were 10,582 people on board the Gustloff. If the figure was anywhere near that many people, over 9,000 people perished in the sinking. It was the greatest single maritime tragedy in history, and by a large margin. Another German refugee ship, the General Steuben, also was sunk, on 10 February, and by the same Soviet submarine. Another 3000+ people dead died on the Steuben. Captain Marinesko knew how to sink ships.


While the sinking of the Gustloff and the Steuben cost some 12,000 people their lives, the evacuation of East Prussia continued unabated. Numerous other German ships were available, assisted by the still-functioning Kriegsmarine, and they managed to avoid any further issues. Some 2 million people were evacuated from East Prussia before the Soviets took Danzig (now Gdańsk) on 30 March 1945 and Pillau, the last German outpost, on 25 April. Any loss of life is tragic, but Operation Hannibal in retrospect must be judged a success due to the large percentage of people that escaped what might have been a very grim fate under the Soviets. Captain Marinesko of the Soviet submarine, on the other hand, was court-martialled upon his return to base, ostensibly for his drinking, and discharged from the Soviet Navy that October. 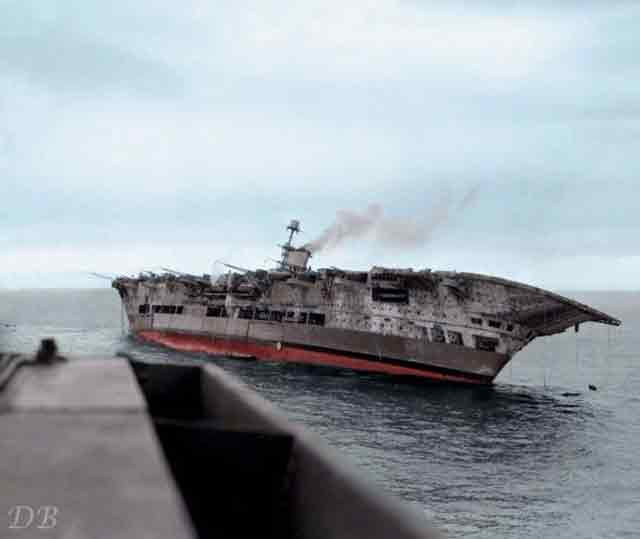