There were many concentration camp guards in the Third Reich, and many of those were female. The women were every bit as brutal as male guards. Not all have been brought to justice; in fact, one (unidentified so far) was charged on 260,000 counts in September 2015 for work she did at Auschwitz as a radio operator for the camp commandant from April to July 1944. If you are enabling a killing machine, the charges mount up fast.

Most criminals of the Third Reich did not have to wait 70 years for justice to be meted out to them.

In fact, there were mass hangings right after the war of brutal concentration camp guards.

Here, we're going to discuss some of the worst cases. These women were some of the most brutal concentration camp guards in the entire system.

The role of women in the Third Reich and World War II, in general, is greatly unexplored, but it needs to be understood. Women are half the human race, and what they are capable of is critically important to future events.

If you believed the media and most textbooks, the only women alive during World War II were working hard in American factories or in auxiliary Allied military units. That is manifestly false; women were a major factor on both sides during the war, and not just behind the lines. Women killed people - they killed people - just as men did. Not only that, some of them savored every moment of it. If you take one thing away from this page, I hope that is it.

Heinrich Himmler's SS ran the camps, so most of the Germans who worked there technically were members of the SS. These guards formed the recruiting pool for the Death's Head Waffen SS Division, so many of the male guards eventually found their way to the front.

The women, of course, did not fight at the Front, that was not something that the Germans were interested in. The women instead remained behind the lines doing support tasks. Some of those tasks were as guards for the duration.

Prisoners were chosen to do much of the dirty work. The choice was to either work as a "kapo," a prisoner serving as a guard who worked under the supervision of the real guards - or, to take your place in line with the others and to go to the gas chamber.

It obviously was an impossible choice. The kapos became notorious for their own brutality, as they were anxious to please their masters and, perhaps regarding some of them, had some issues of their own.

Elisabeth Volkenrath (born 5 September 1919, Schönau an der Katzbach, Silesia – died 13 December 1945, Hamelin) was German supervisor at several concentration camps during World War II. Volkenrath trained under Johanna Langefeld at Ravensbrück concentration camp during 1941, and in 1942 went to Auschwitz Birkenau as an Aufseherin. In April 1945, she was arrested by the British Army and stood trial with Irma Grese. She was executed at Hamelin Prison later that year.

It is easy to bring preconceptions about females into your mental image of female camp guards. Don't. These ladies were as bad as the men: they were brutal and expressed no remorse whatsoever.

Many went to their hangings without renouncing a thing that they had done, and only wishing that they could have continued longer.

There could have been mitigating factors. For instance, some of the women may have been mentally infantile or abused themselves, or simply unaware of concepts of right and wrong. Many peasant girls of the day were incredibly unsophisticated, and may not have been aware of the heinous nature of their activities.

All of that was taken into account during their trials, sentencing, and execution (if found guilty of the most heinous offenses). Some were acquitted, many were hanged.

Below, a few of the female camp guards. Guards were executed for their crimes regardless of gender if so warranted by the facts.

Hildegard Lächert was nicknamed "Bloody Brigitte" (Krwawa Brygida in Polish). Many witnesses characterized her as the "worst" or "the most cruel" Aufseherin, as "Beast," and as "Fright of the Prisoners." For her part in selections to the gas chamber, releasing her dog onto inmates and her overall abuse, the court sentenced her to 12 years imprisonment. Hildegard Lächert died in 1995 in Berlin, aged 75.

Dorothea Binz was an SS supervisor at Ravensbruck concentration camp. Her dedication to her work was described by fellow guards as unyielding. Patrolling the camp with a whip in one hand and a German Shepherd at her other side, Binze made inmates fall silent upon her approach. Whipping, beating and shooting female inmates earned her the job of supervising torture bunkers and training guards. Convicted of perpetrating war crimes, she was sentenced to death and hanged on May 2, 1947. The middle picture shows what many inmates probably saw right before they died.

February 3, 1947: After a trial lasting two months, all fifteen former members of the staff at Ravensbruck concentration camp, where 100,000 women were said to have died during WWII, were found guilty by the Hamburg war crimes court. 12 were sentenced to death. Pictured above is Carmen Mory, a “kapo” - a prisoner at the camp who was assigned by the SS to supervise forced labor. The kapos, desperate to please their evil bosses in order to avoid the gas chambers themselves, were often the most brutal of all. Carmen Mory was sentenced to death, but she committed suicide on April 9, 1947.

The Stutthof SK-III women's camp was particularly notorious for having sadistic female guards. In the Stutthof Trials (there were six, lasting until 1953), 72 SS officers and 6 female overseers were convicted. The first female to hang was Wendy Barkmann.

Gerda Steinhoff (1922-1946) personally selected people for the gas chambers at Stutthof and other camps based upon her whims. On May 31,1946 she, along with several compatriots, was sentenced to death by hanging The sentence was carried out at Biskupia Gorka near Danzig on 4th July 1946. 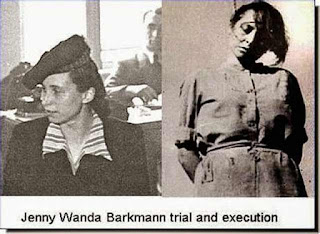 Jenny-Wanda Barkmann, 24, female guard at the Stutthof concentration camp, was hanged by the neck until dead. She committed all sorts of atrocities during her tenure. She and several others were hanged near Danzig on 4 July 1946. Barkmann brutalized female prisoners viciously and selected women and children for the gas chamber.

Stutthof was liberated by the Russians on May 10th, 1945. Commandant Johann Pauls and staff were put on trial by the Polish Special Law Court at Danzig between April 25th and May 31st, 1946. Five women and six men were found guilty of war crimes and sentenced to death. Johann Pauls, SS-Aufseherins Jenny Wanda Barkmann, Elisabeth Becker, Wanda Klaff, Ewa Paradies, Gerda Steinhoff, and five other men. They pleaded "not guilty" and the women did not seem to take the trial seriously until the end.

Set up immediately upon Germany’s September 1, 1939 invasion of Poland and not liberated until after official German capitulation in 1945 - many parts of Poland were still in German hands at the surrender - Stutthoff handled over 100,000 prisoners during its long service. Most of them died.

This day’s condemned — camp commandant Johann Pauls, five male kapos, and five female guards — were the product of the first of four Stutthof trials held in 1946-1947. At a hill in Gdansk known as Biskupia Gorka (Bishop Hill), upon a specially-erected row of four T-shaped double gallows centered around a pi-shaped triple gallows, and before a crowd of thousands, the doomed eleven were noosed on the back of military trucks which then drove away to leave them strangling to death with a “short drop” hanging.


There, of course, were many male camp guards, that goes without saying. They got the noose, too, or sometimes worse. Yes, there are worse ways to go than a clean and straightforward hanging.

Johanner Altvater (above) and Liselotte Meirer (below) killed Jews for sport during the Third Reich.