Japan surrendered shortly after the atomic bombings of Hiroshima and Nagasaki. It was also shortly after the Soviet declaration of war on 9 August and its immediate invasion of Manchuria and the Kurile Islands, in mid-August 1945.


How much effect each had on the decision is debatable and somewhat a matter of national pride for the nations concerned. The argument is sterile because Japan as a military power was finished one way or the other as a result of any possible combination of those events - and even without them, to be truthful. The official ceremonial documents were not signed until 2 September 1945.


The importance of the actual signing should not be discounted. The Korean War, for instance, had an Armistice Agreement, but no actual peace treaty. That formulation hasn't worked out so well in the long run.

So, the Japanese surrender ceremony actually was a big deal - a very big deal - and the Americans made sure to make it into quite a show. Unlike the surrender of Germany to the Western Allies, which was handled in a Reims schoolroom, this one was done in the light of day, with planes flying over, everybody dressed to the nines - a real Hollywood production.


Nothing wrong with that at all. It was the least they could do to commemorate the end of such a vicious war that took so many lives. Nobody puts on such spectacles better than Americans.

Meanwhile, Back in Town....

A Life photographer (apparently) followed this fine fellow around town as he ostentatiously broke about half a dozen set-in-stone occupation rules. One imagines things were not quite this idyllic for the vast majority of occupying soldiers. What the point of this photo shoot was, which probably inflamed many a spouse and sweetheart cooling her heels back home in Kansas or Pennsylvania, is a mystery. 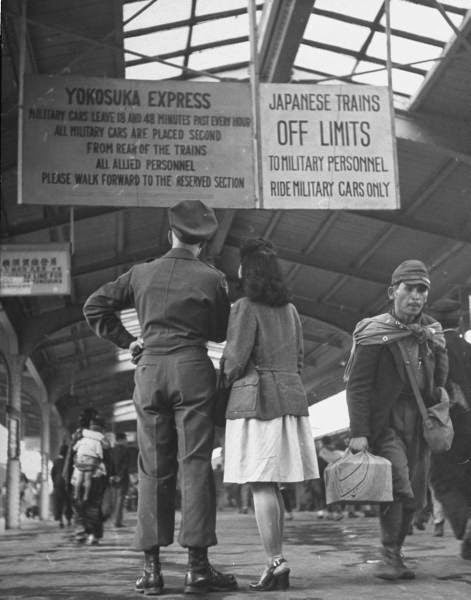