When most war buffs think about the German bombers of World War II, they remember all the two-engine jobs like the Ju 88 and the Heinkel 111. They can probably also remember the trimotor Ju 52, and perhaps the elegant Focke Wolf 200 four-engine bomber/reconnaissance plane. If they're really good, they know about the massive six-motor Messerschmitt Me 323 Gigant powered glider.

Many even recall the failed Heinkel 177, the "flying fireworks" which had the weird (and over-engineered) arrangement of four engines crammed into two nacelles. The common thought is that the Luftwaffe had no planes comparable to the heavy bombers of the Allies such as the U.S. Liberator and the British Wellington. This was because the Germans didn't believe in big planes or something along those lines.

However, the Germans would have loved to have had bigger bombers - Luftwaffe Chief Hermann Goering raged about this at times during the war. They spent an awful lot of time studying the American and British designs and working on their own. The designers tried to please Goering, but there wasn't enough time and there weren't enough resources to get together a really good heavy bomber fleet for the Luftwaffe. Decisions made before the war took time to reverse, time that Germany did not have. There were, however, a few four-engine German transport planes that showed great promise. The Junkers Ju 290 was one such plane.

It is pretty well accepted that the best four-engine plane that the Germans developed in any kind of numbers indeed was the FW 200 Condor. However, as brilliant a design as the FW 200 was, it had some major drawbacks: the bomb load was only a ton, which even some fighter-bombers such as the Focke-Wulf 190 could manage; it was increasingly slower than enemy fighters as time went on, making it too risky to send on attacks; and the landing gear was inherently weak, meaning many crashed upon landing. The Junkers Ju 390 was intended to correct those deficiencies of the Condor, and it did so brilliantly.

The Junkers Ju 290, as was the custom in German design circles at the time, was adapted from a previous successful aircraft, the Ju 90 airliner. It was designed to be fast and able to carry a good-sized payload, either as a transport or as a (never built) bomber.

The Ju 290 prototype first flew on 16 July 1942, the time of peak German success. Transports were badly needed in almost every direction, with Rommel in North Africa always short of supplies and the Wehrmacht marching into Stalingrad, supplied by single-track railways. The Ju 290 was pressed into transport service as quickly as they came off the production line. This was the unarmed A-1 production version.

The Condor, which had given the British fits in 1940-41, was getting shot down in increasing numbers by 1942 in its role of maritime reconnaissance. The Junkers 290 model A-2 filled this role. Three A-1 versions were converted to A-2 models, such was the need. The A-2 had radar and a dorsal turret armed with a 20 mm MG 151 cannon. The radar was used to locate Allied convoys as far away as 50-60 miles.

The A-2 was fairly successful in this role, so another version soon came along, the A-3. Aside from navigational equipment, it had cannon tucked all over the place: two dorsal turrets, one in the tail, one beneath the nose, and machine guns in the waist positions and under the nose. It had auxiliary tanks inside and a loading ramp in the rear.

Development continued as the war situation worsened. The A-7 version was introduced in early 1944. This was another anti-shipping version. The A-6 could carry 50 passengers when in transport mode. All told, 65 Ju 290s of all types were built.

Flying out of Bordeaux, France, the first maritime reconnaissance version flew in November 1943. They could stay aloft for 18 hours and shadow a convoy to direct U-boats into the vicinity. However, despite their utility on missions, the need for transports was too great. For example, one early version was even involved in the Stalingrad airlift. 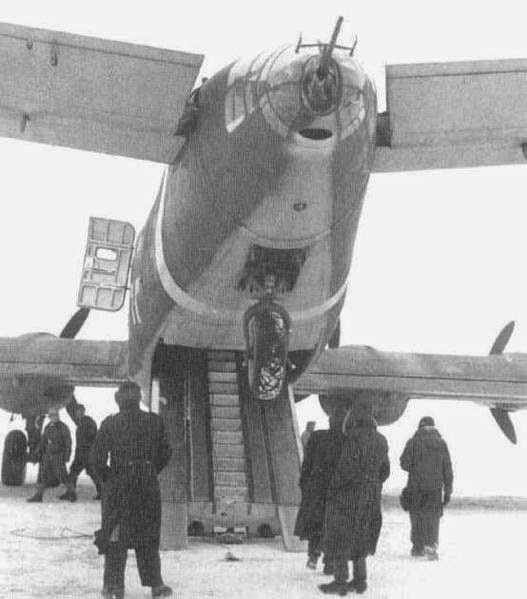 With German fortunes waning, Armaments Minister Albert Speer canceled the Ju 290 program in the spring of 1944, around the time when all bomber projects were canceled to the exclusion of fighter production. In reality, the cancellation was due to inter-service rivalries, with Hermann Goering behind the decision because he didn't want aircraft production diverted toward the Kriegsmarine's needs. The truth was, though, that Admiral Karl Doenitz in charge of the Kriegsmarine didn't really need the Ju 290 any more anyway despite his insistence to the contrary - the Battle of the Atlantic had long since been lost by the time of the Ju 290's cancellation. The aircraft had simply become a way of the top dogs asserting their egos, with actual military need only a secondary consideration. Goering may have been gradually losing influence with Hitler, but he still had a tight grip on aircraft production, so his decision was final.

The remaining Ju 290s continued flying, but the French bases were lost by August 1944. Some flights were planned to Manchuria for various minor purposes, but it is not known if any actually were carried out. The initial plan was to fly a northern route across the Arctic and then down to Manchuria, and there were also rumors of later flight from Odessa or thereabouts to Manchuria. If any such flights were made, all records of them have been lost. The Japanese, hard-pressed by the Americans, did not want to antagonize the Soviets with overflights of Soviet territory, so it is unlikely any such flights were made.

Incredibly, the Junkers Ju 290 were still flying regular routes into April 1945, with one landing that month in Barcelona on a routine airline passenger flight. Spain suspended such flights on 21 April 1945 due to the worsening war situation and impounded all Luft Hansa aircraft on its soil, keeping them for post-war use of its own. Hitler's personal Ju 290 was destroyed in a bombing raid in March 1945. There are no known surviving examples of the Junkers Ju 290, the last one apparently having been scrapped by the Spanish in 1957 - though there may be salvageable (with intense difficulty) fairly intact wrecks at sea.