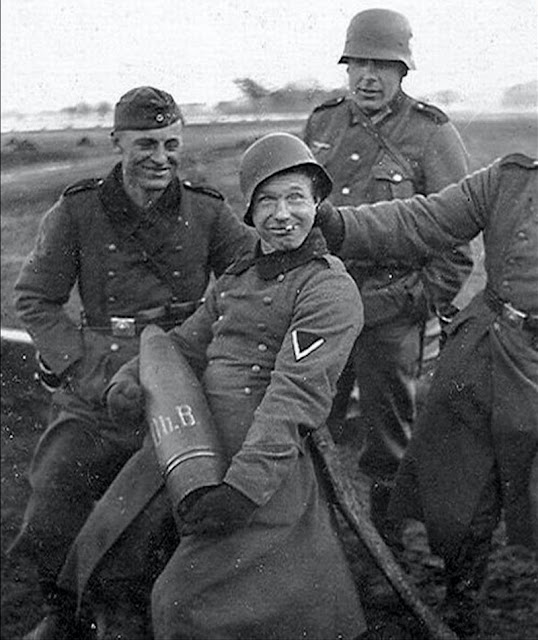 I've been collecting odd photos from World War II and decided finally to post them. By odd, I just mean... revealing in ways that are not necessarily quite normal and by-the-book.

Well, they are odd to me, but you may find them perfectly normal, and perhaps some of them are.

There are photos from both sides, and a few aren't really odd so much as just incongruous.

Or out of place.

Hitler had his admirers. Even American ones, as above at the Olympics. Bet she wanted that one back later. 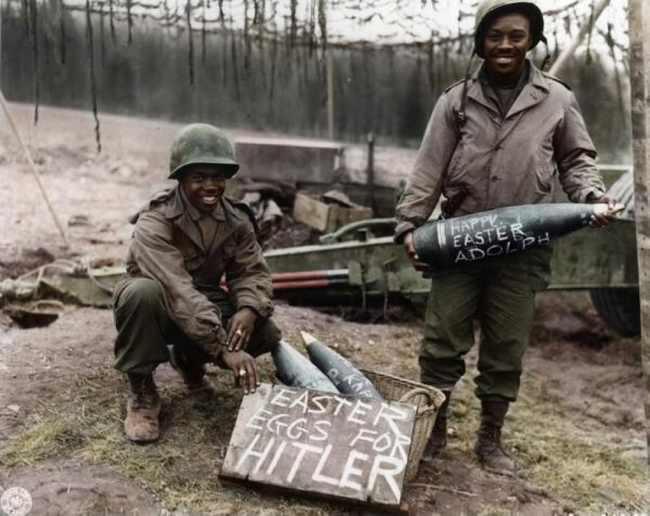 And you wondered why mail call is so important?

Well, boys will be boys. You know how it is, they just want a little of that lovin' feeling.

Aliens, anyone? They must have got some of those foo fighters with that 88.

It is easy to picture all Germans as robots shouting "Heil Hitler" as they click their heels and run to their machine guns. That is the stereotype and was at least as early as "To Be Or Not To Be" in 1941, when the climax of the film occurs as a blindly loyal Wehrmacht soldier is convinced that it is his duty to Hitler to jump out of a plane without a parachute. However, these photos show a little, shall we say, originality.

Now, there may have been some mindless drones during the war - there usually are, in all armies. But for the vast majority of World War II grunts on both sides, the war was a major inconvenience, and an opportunity to have a little fun was welcome.

Sometimes the frat boys really put the hard sell on the ladies, as below. And yes, they are all loving it, check out the two other girls with the pistols ready to go.

While some of the official studio portraits themselves are a bit farcical or at least "revealing" in hindsight, in general, wartime photographers tried to make everything look just-so. The point was to make things ideal for government magazines and so forth. So, seeing a break in that monotony in the photographic record is kind of fun. 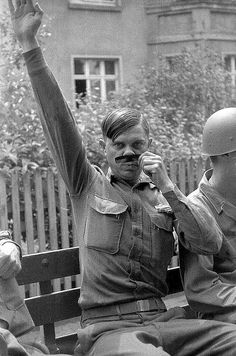 Anyway, this page is intended as some light relief from the otherwise grim pages full of death and killings. Or, at least, a more human look at the less heroic sides of the conflict.

No offense is meant, if you prefer not to see a lighter side to the war, that's perfectly understandable and you certainly have your reasons. I also have plenty of pages of death and destruction if that is your thing. 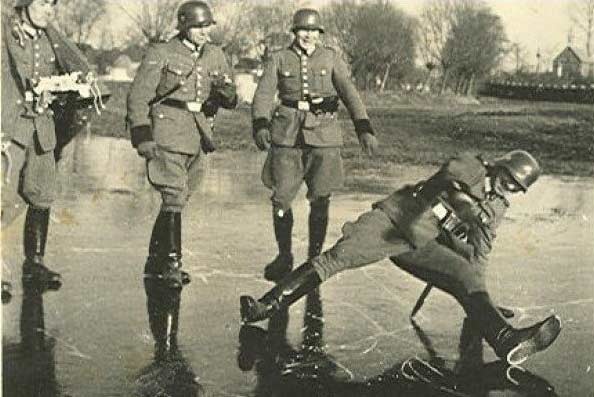 However, for those looking for something "completely different," as Monty Python would say, well, here it is.

And, no, I have absolutely no idea what the situation was for some of these shots. I don't know the identities of the people involved (well, except for one or two), and I don't know the photographers. It's possible some are not genuine. This page is meant as a bit of fun, not some kind of deep critical analysis.

However, when you get gangs of high-spirited young guys out in the middle of nowhere with nothing to do except wait for death and with no women, you do get some unusual behavior.

Even the civilians get into the act now and then.

Perhaps the best attitude of all for some wise folks is just to ignore that silly war raging around them.

Now and then, a political statement will occur, but it's all just part of the fun. 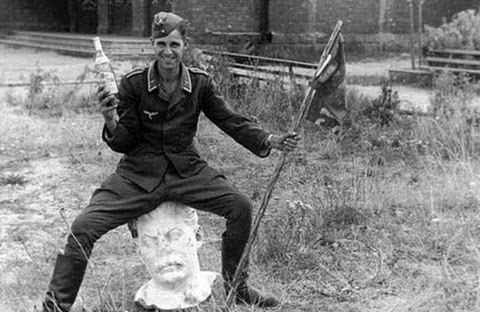 The fact that I get a chuckle out of some of these no doubt says more about me than anything else, but it appears the fellows themselves found it humorous as well.

Incidentally, one reaction that I expect to these - because I've seen it before - is "Oh, that is nothing unusual! We did such-and-such and this-and-that." I know, I know. But did you take photographs and keep copies for 70 years? 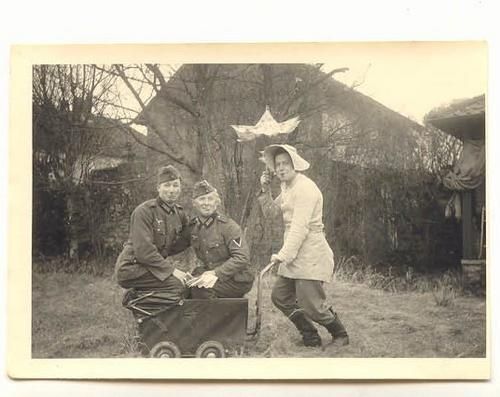 Let's just say that some of these guys would have done better if there were some women around. Any women.

You also have to remember that homosexuals and the like were sent straight to concentration camps, so some of these photos definitely are not political statements or "guys just expressing their true inner feelings." I know that's what some will want to think of seeing these, but it's extremely unlikely. Dressing in drag and such is kind of a male rite of passage or bonding experience or whatever.

Now, with some of them, you just know they knew what they were doing and the shots are fairly obvious. To be fair, though, some of the subjects of these shots probably didn't intend to create a comical image. Remember, the photographer is the one who chooses what to shoot and how to position themselves.

But then, others were, shall we say, a bit more knowing.

Certainly, in context, all these photos undoubtedly would make perfect sense. "It was so-and-so's birthday party, it was the night of the company skit and somebody had to play the maiden, we were ordered to collect flowers for the General's wife or blah blah blah." The whole thing with old photos, though, is that sometimes context flew out the window and didn't return.

And most of these guys sure seemed happy, context or not. 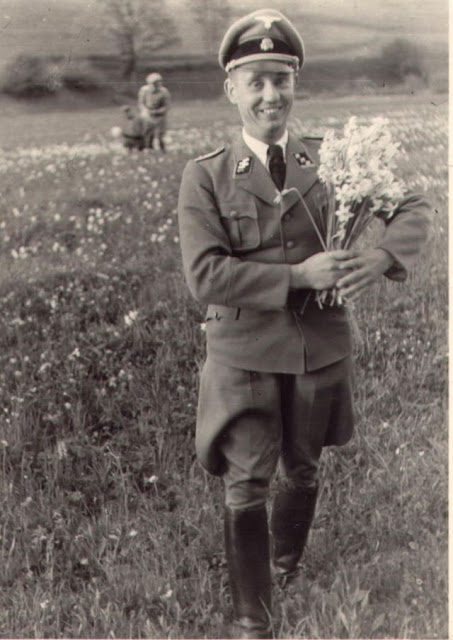 Of course, some of the "happy" pictures were posed and only taken and distributed as pure misdirection.

Yes, the Germans did have DJs, and they did spin records. The photo below is not a fake. They were distributing gramophone records, apparently of Hitler speeches, at a radio exhibition which started in Berlin on August 19, 1932. And yes, the chicks did dig it. 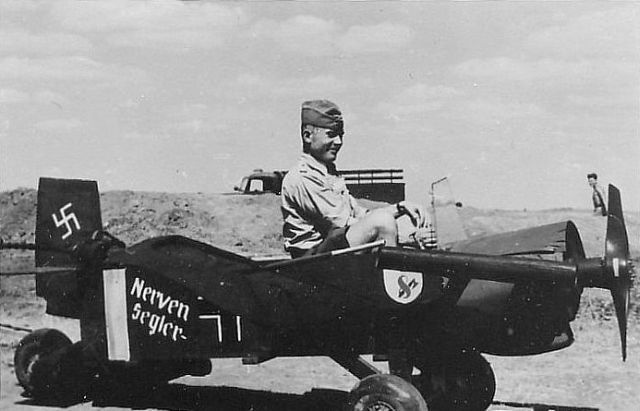 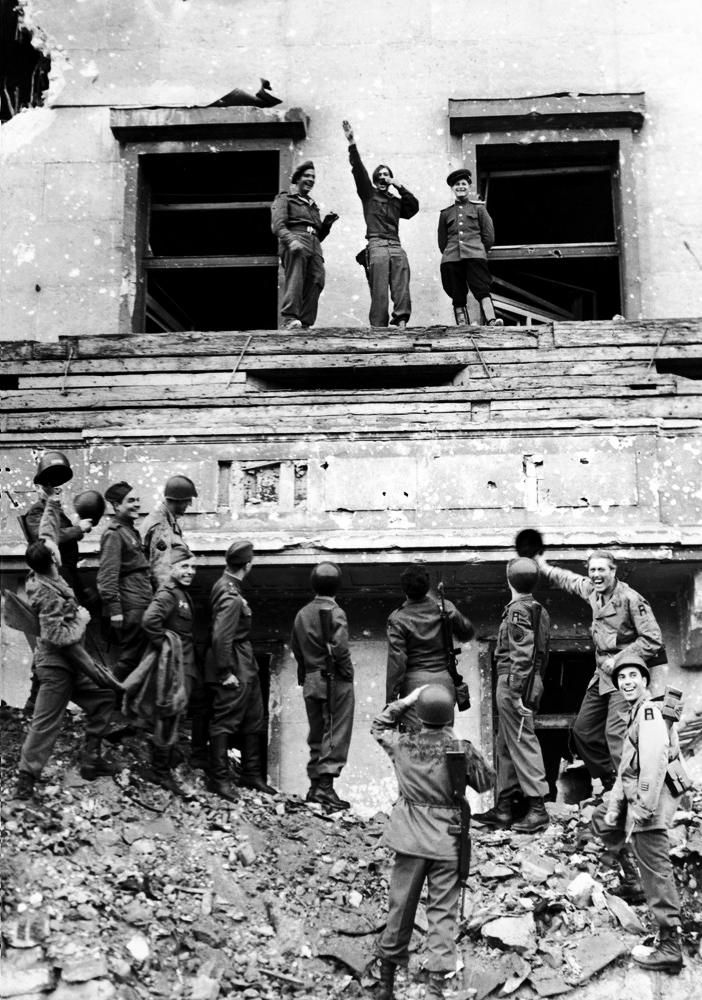 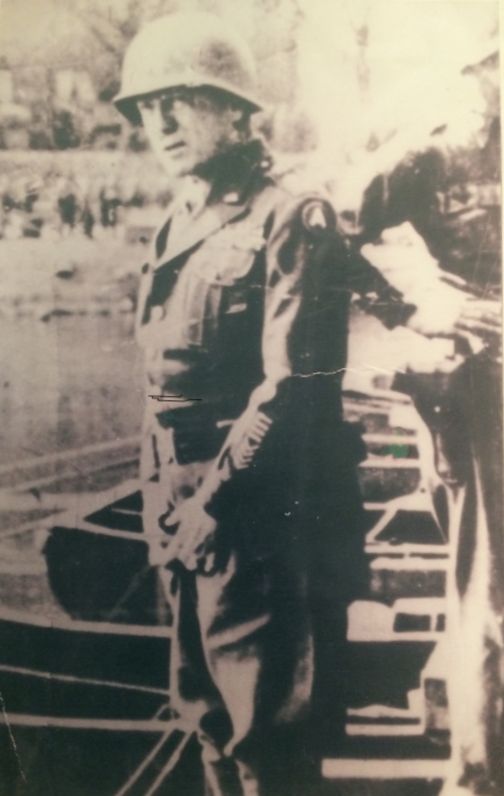 The answer to the patch question above: That is the insignia of the US Army's 45th Infantry Division. It was a part of the Oklahoma National Guard, and the swastika was a Native American symbol that the unit wore to honor the local people. 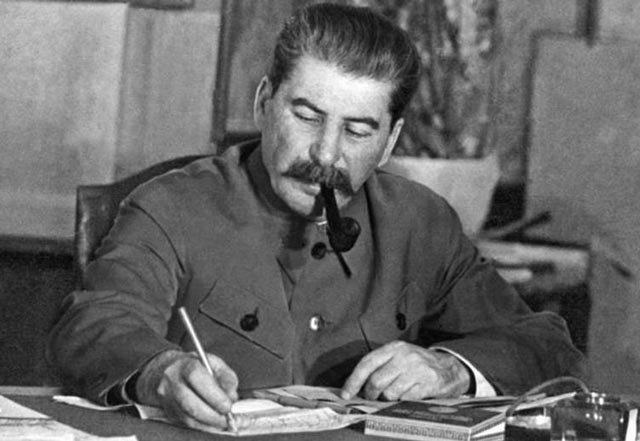