Okay, here's a question for you military trivia experts: when was the first US military drone? Was it the Second Gulf War? The First Gulf War? Vietnam?

Well, as a matter of fact, there were indeed drones in those wars. However, they were not the first military drones. The first US military drone - a real drone, not some "ancestor" of a drone, but an honest-to-goodness, flies-by-itself, does-something-militarily-useful drone - flew in World War II. Before there even was a US Air Force, in fact (it was known as the US Army Air Force then, or USAAF).

They were called "radio planes" (the one shown is an RP-5 aka OQ-2 Radioplane aka TDD-1) because nobody had come up with an official name for them - but they were drones, and known by that name informally even at the time.

And, in those pictures at the beginning of the article, you're looking at drones. Oh, and you are also looking at Norma Jeane Mortenson/Baker/Dougherty (Norma Jeane had a lot of names to keep track of). But the drones were the thing, at least they were the intended thing for you to be looking at in those shots. Though, of course, nobody now gives a fig about the drones.

Marilyn went to high school in Los Angeles. She was just plain Norma Jean Baker then. Marilyn graduated in 1942, about six months after the United States entered World War II. 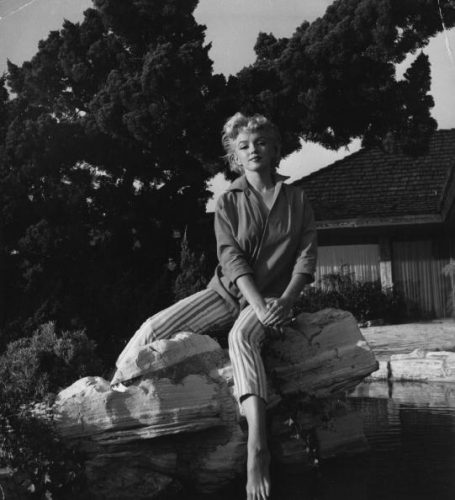 Marilyn's mother was a film cutter at Consolidated Film Industries but had a lot of mental issues and Marilyn was placed in orphanages and foster homes after her birth in 1926.

Let's back up a step to see how Marilyn got into the factory in the first place so that she could be in those pictures. Marilyn was a typical (adopted) high school kid in Van Nuys when the war broke out.

She lived with a foster family, but when they moved out of state, Marilyn had to do something quick, because kids in her situation were not allowed to leave the state and could not be alone.

Marilyn married 21-year-old neighbor James "Jim" Dougherty, a worker at Lockheed, on 19 June 1942. When Jim enlisted in the Merchant Marine in 1943, the happy couple moved to Catalina Island off the California coast the following year. This was so that Marilyn could be nearby while Jim was in basic training on the island.

The couple's house on Catalina, incidentally, is perfectly preserved and a top destination for Monroe fans (it's just somebody's house, though, so don't bother the occupants, please stay on the sidewalk). The house is at 310 Metropole Avenue if you happen to be visiting the island. It is just a short walk up from the waterfront area.

The Monroe house has a real San Francisco vibe, being built on a street running up a steep hill from the harbor. It appears from the photographs of Marilyn on the island that she was happy there and enjoyed going to the beach. After Jim shipped off and left Marilyn on her own, she moved back to the mainland.

This essentially was a marriage of convenience, to keep Marilyn out of returning to an orphanage (she was barely 16 years old). Essentially, Jim was doing Marilyn a big favor. This was Marilyn's first personal experience with the military. The marriage was not to her liking and was over shortly after the war (at which point Jim completely disappears from history), which leads to a lot of misconceptions. Really, the marriage was only necessary due to her age, and once she got old enough to live on her own, it was no longer necessary, so it's not like the couple divorced because they hated each other. So, that chapter of Marilyn's life closed.

However, Marilyn's connection with the military was just beginning.

After Big Jim went overseas in 1943 and she moved back to the mainland in 1944, Norma Jeane Dougherty got a position with the Radioplane Munitions Factory at Van Nuys Airport in the Los Angeles metropolitan area. Her job was spraying down the planes with a fire retardant. However, in the 1944 spread for Yank magazine from which the above photos are taken, photographer David Conover shows Norma Jeane putting together an OQ-2 radio plane. This was first mass-produced and unmanned aerial vehicles in the world, what today (and sometimes then) was called a drone. Assembling the drones actually wasn't Marilyn's normal job (she used a hose and not any tools). Marilyn likely had never held a wrench at the factory before, but posing her with one was close enough to reality for government work.

How Marilyn got the modeling assignment is a tale of serendipity. It all came about in a circuitous manner. David Conover worked for the U.S. Army Air Force's First Motion Picture Unit. His boss sent him to the Radioplane Munitions Factory to get some good publicity snaps of war production for morale purposes, not to find the next superstar model/actress. Out of all the girls in the factory, Conover picked Norma Jeane Dougherty. She had a wholesome, girl-next-door look that was intoxicating. Really, that is how these things work, then and now: someone makes a fateful decision. 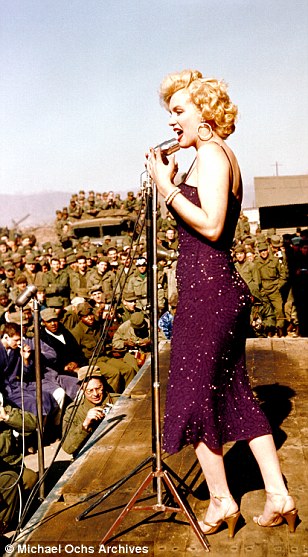 Conover took the snaps of Norma Jeane assembling the drone and used them in the magazine spread. That could have been that, but Conover remembered the pretty drone girl and later recommended the wholesome young lady to another photographer who was looking to build a portfolio. That photographer, Bill Carroll, took a bunch of pictures of Marilyn at what would prove to be her most-photographed location: the beach. He then filed them away and only realized in the 1980s that the pretty unknown girl at the beach, Norma Jeane Dougherty, had later changed her professional name to Marilyn Monroe.

There are many myths about how Norma Jeane came up with the "Marilyn Monroe" moniker. Mickey Rooney famously claimed that he came up with it one day on the spot while he was on the phone with his agent. The reality is likely a little more prosaic: Norma Jeane used her mother's maiden name and an alliterative first name picked by studio executive Ben Lyon. He took it from Broadway star Marilyn Miller (another alliterative name, common in the era). Sorry, Mickey. Incidentally, Marilyn Miller died prematurely at age 37, while Marilyn Monroe died prematurely at age 36.

Carroll's snaps were Norma Jeane's first paid modeling work: he gave her $20, which was good money in those days for a day's work. 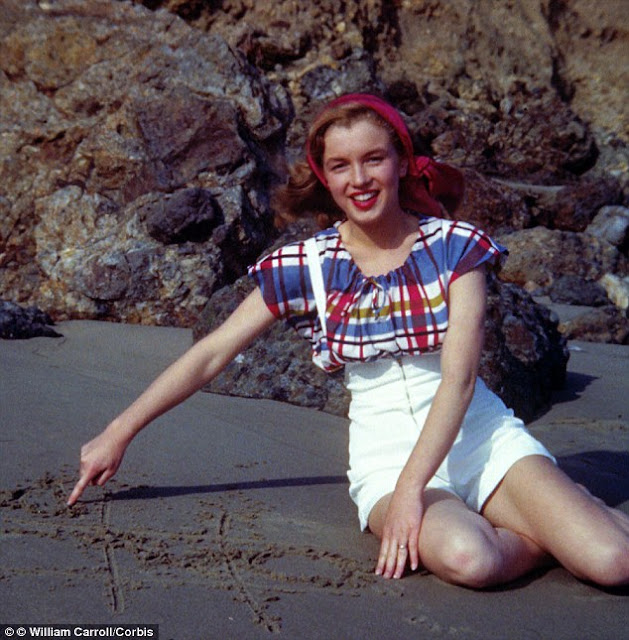 So, Bill Carroll made Norma Jeane into a professional model, which caused her to look for other work in the field after the war. This led her to her first paid ad - a print ad for bandages. Now, we have the chain of causation: Carroll gave Norma Jeane her first model salary because he got that tip about the pretty girl from his pal David Conover. And Conover only knew Marilyn because he went to Norma Jeane's radio plane factory and "discovered" her. Conover only went to the factory because his boss ordered him to get some shots of the drone manufacturing process - not of Marilyn, that was strictly accidental and fortuitous. And Conover's boss who started the whole thing and first brought maintenance worker Marilyn Monroe to world attention?

So, yes, there is a connection between Marilyn Monroe and World War II: she was discovered in a drone factory due to a decision made by Ronald Reagan, which gave her the start of her entire film career. The conflict and the opportunities that it provided very directly gave Marilyn her start in the professional world of modeling, which led to her film work, which led to you and me to know her name.

And, that is not the only connection of World War II to Marilyn Monroe's later career.

One of her husband's co-workers on the Lockheed factory floor, Bob, remembered Norma Jeane fondly years later. However, at the time, Bob only knew her as the wife of fellow worker Big Jim Dougherty. And, along with Norma Jeane, Robert Mitchum also became one of the top stars in Hollywood after the war. They starred together in "River of No Return" about a decade later. 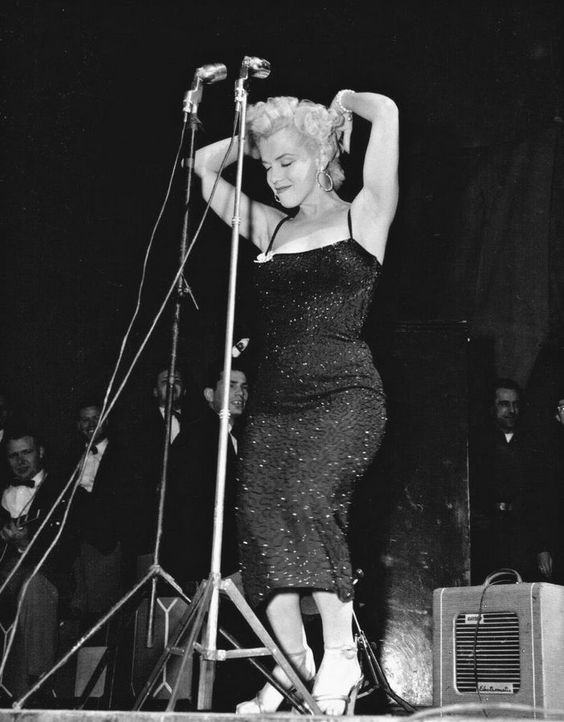 Marilyn continued her relationship with the military long after World War II.

After entertaining U.S. troops in Korea in 1953, she said:


That was the best thing that ever happened to me. I never felt like a star before in my heart. It was so wonderful to look down and see a fellow smiling at me.

It is fair to say that Marilyn's relationship with the military that began during World War II helped to define the rest of her life - as with so many millions of other people.