While easy to disregard as just another of the last-minute jet projects undertaken by the Germans as the Allies closed in, the Heinkel He-162 "Salamander" was no jury-rigged disaster like some of the other Utopian German projects. It was quite capable and a brilliant feat of engineering. 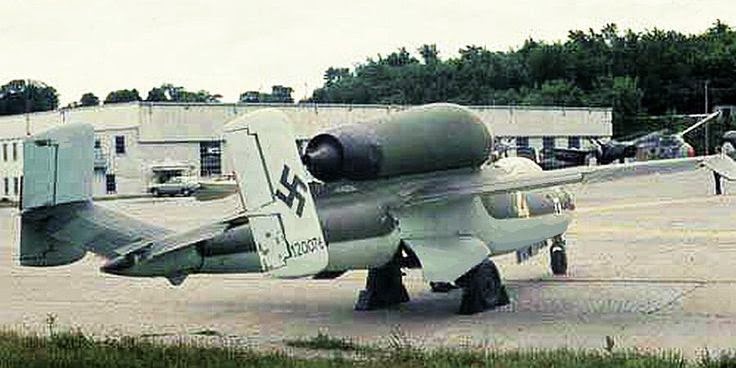 The Germans had the inspiration, the technology, the materials and, most importantly, the desperate need to crank out a capable jet fighter; the capable ME-262 just couldn't do it alone. What the Germans lacked was pilots, time and fuel. 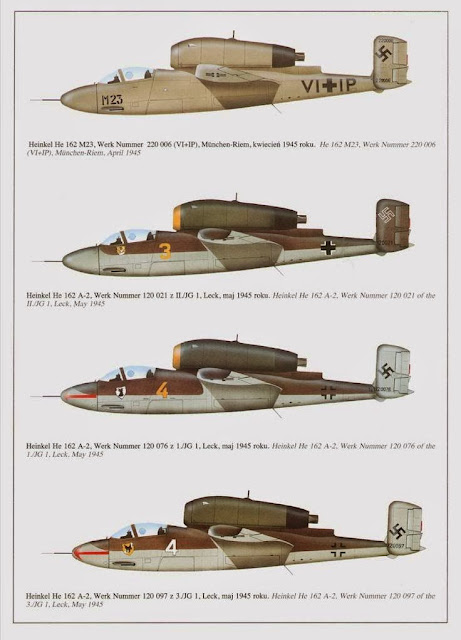 Envisaged as a "People's Fighter" which could be flown by just about anyone, the Salamander instead was a high-performance, cutting-edge piece of hardware that stood a good chance of turning the tide of the air war if the Heer had been able to hold the Luftwaffe's airfields and oil supplies.

The need for better fighter defense had been clear to the Germans since at least August 1943, when Luftwaffe Chief of Staff Generaloberst Hans Jeschonnek committed suicide due to massive Allied air raids. The western Allies were flattening German cities one by one, and the Luftwaffe was unable to prevent it - though it did impose a punishing cost on the attackers. Piston-jet fighters were capable, but insufficient against the 1000-bomber raids that began in July 1943. The Me-262 fighter was progressing nicely, but Hitler was interfering in its progress, diverting its development to make it capable of pinpoint bombing. In addition, the Me-262's jet engines were troublesome and in short supply. Some diversification of effort was warranted.

What was needed was a less complicated project that could be slapped together without any rigamarole and put in the hands of Hitler Youth who would destroy the enemy bombers as they had destroyed the British tankers at Caen.

Air defense was becoming critical because the Allies were destroying the life's blood of any modern army, the Reich's oil supplies.

Luftwaffe Minister Hermann Goering and Albert Speer, the armaments chief who knew what the failing industrial base could and could not still achieve, came up with the idea of a "throwaway fighter," one made out of wood and other non-critical materials.

Specifications were issued on September 10, 1944. This was very late in the war, after France had fallen to the western Allies and the Russians already were sitting on the Vistula. By any rational calculation, the war was long since lost and the Germans should have sued for peace rather than embarking on fanciful high-technology projects. But they didn't, because they had high hopes for various panacea ideas such as the Salamander. 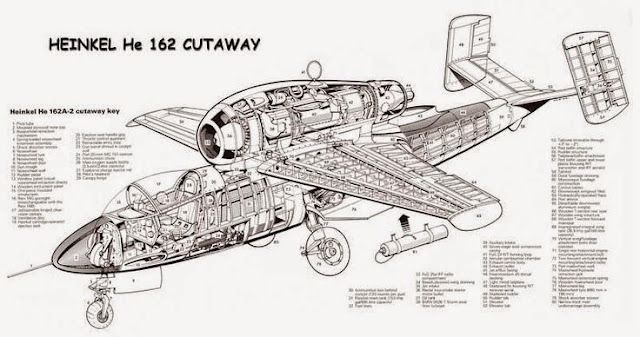 On the bright side for the Germans, it was the start of a relatively stable period on all fronts as the Allies digested their vast territorial gains of the summer. The enabled the Germans to assemble a small army reserve with new heavy tanks and Volksturm units, insufficient to do more than temporarily stave off defeat.

However, this brief reprieve was enough to give the Germans hope of prolonging the war long enough for fantastic projects such as the Salamander to bear fruit. It was a forlorn hope, but it kept the men at their guns, which some would say was the real impetus behind crash programs with little likelihood of success such as the Salamander. 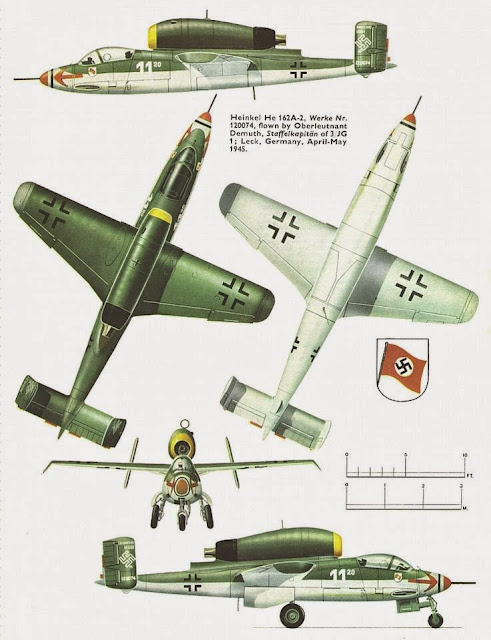 An Emergency Fighter Program was set up. Heinkel already had designs in the works - all aircraft designers have contingency designs ready to be worked up in short order should someone want to pay for them - and won the contract. The great advantages of the design were that it only required one jet engine, as opposed to the Me-262's two, and that it was made primarily of wood. This design thus was crafted to accommodate the real economic situation of Germany in the fall of 1944. 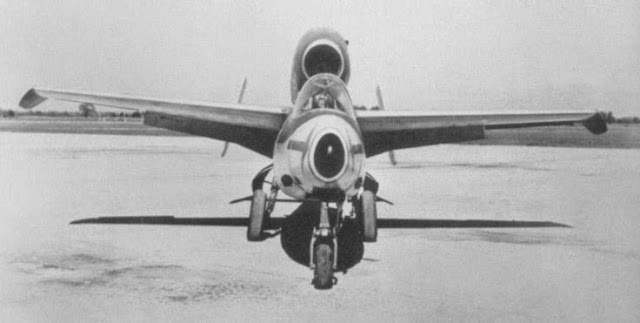 Heinkel cranked out the prototype in the incredibly short time of six weeks, reflecting the extreme desperation being felt by higher-ups who probably shot anyone who delayed development.

The first Salamander flight on December 6, 1944, succeeded, but the second flight a few days later killed the pilot and revealed glue problems that had to be worked around. Small changes were made to compensate for the structural problems without correcting them, desperate measures that never would have been attempted in normal times with adequate materials.

The changes kind of worked, but the craft was plagued with problems throughout its short lifespan. Still, that the craft could be produced at all under conditions in Germany during late 1944 was little short of a miracle.

Production proceeded immediately despite the problems - there was a war on! I./JG 1 had the honor of training in the brand new fighter at Parchim, which was a convenient 80 km south-southwest of the Heinkel factory. The Allies were on to the German plans and promptly bombed Parchim, sending the unit scrambling to other airfields, winding up near the Danish border.

There simply wasn't enough time to get the unit ready in normal fashion, but in desperation some of the planes were flown on missions during the last month of the war anyway - the pilots knew it was a death-trap, but the survival of their country was at stake.

Some kills were achieved - how many will never be known, but there were several - at the cost of about the same number of planes lost primarily to mechanical problems. Armament was two 20mm MG 151 cannon, while top speed was variable depending on height but reached a maximum of an incredible 562 mph for short durations at 20,000 feet.

It was the fastest jet in existence, though the rocket-powered ME-163 was faster. Flight duration was a measly 30 minutes, which caused some fatalities as pilots couldn't make it back to the runway.

Rather than destroying their surviving aircraft at the surrender as many other units were doing, JG 1 kept the advanced fighters intact and turned them over to the Allies.

Testing showed that they were fine, responsive aircraft with issues. Nobody disputed that properly developed, the Salamanders could have been devastating weapons. Production ramped up early in 1945 and began cranking out these high-performance jet fighters. However, time ran out for the Third Reich.

The Allies knew all about the German jet fighters and rightly worried that planes such as the Salamander could turn the air war against them if the war lasted long enough.

The Hinterbrühl underground production line for the He 162A was captured in April 1945 as Hitler's Reich crumbled.

Of all the last-minute projects of the Luftwaffe, the little-known Salamander may have held the most real promise. Along with the Arado 234 and the Me 262, it was the class of the first jet aircraft. 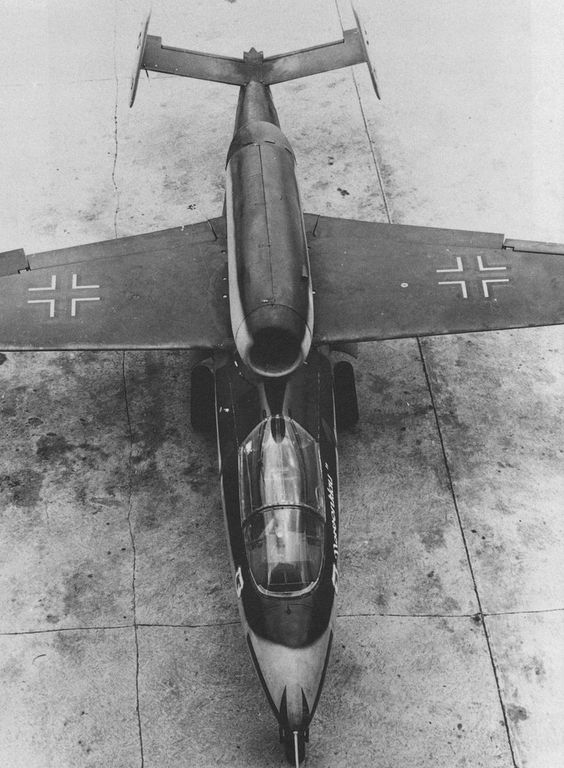 With sufficient fuel and time for pilot training, the Salamander could have made a difference. However, the Reich's time had run out. Several examples survive.