Children Were Key Parts of the Conflict 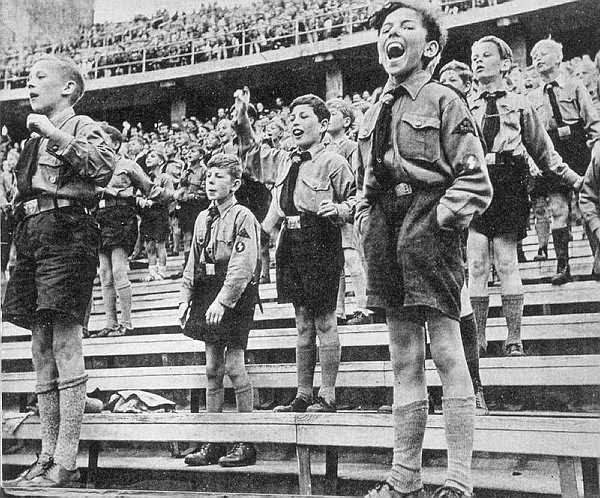 In more ways than one, World War II was the war of the children. You may not have been told this, but children fought and died on both sides.

They started out cheering and wound up dying. That's not an exaggeration, that's the reality.
Children suffered on the home front along with adults during bombings and ground attacks, but they also did some attacking and defending of their own at the front lines.
German children were actively recruited for various defense purposes throughout the war, not just at the very end.
The boys, indoctrinated in the system from birth (or, as the poster above shows, at least from the age of 10), were more than willing in many cases.
Kids are full of feelings of invulnerability and the desire to prove their worth and abilities. That's what gets them killed.
It was the norm for German schoolchildren to wind up working alongside their schoolmasters (often WWI Vets) on anti-aircraft duty or guarding important installations. Not all of the jobs were dangerous, but some were very important.
The war served as a king of the extracurricular learning experience. It is not exaggerating to say that the entire Third Reich culture conspired against young boys. Did the Third Reich give these boys exactly what they wanted, a chance to act savagely with praise from parents and onlookers? Sure. It also gave them ample opportunity to die doing it.
Surviving the war if you were in your late teens was a major accomplishment.
At that age, it is difficult to question those who are older and who stand as the leaders of your people.
Without the experience to make your own assessments as to the validity of a cause or to challenge authority, the tendency is to follow it blindly and whole-heartedly.
This tendency to conform to what is asked of you, regardless of deeper issues such as morality, survivability or long-term sustainability, is enhanced by the respect given by all to senior soldiers with shiny medals and lots of gold braids; there is nothing a schoolchild wants more than earned respect. 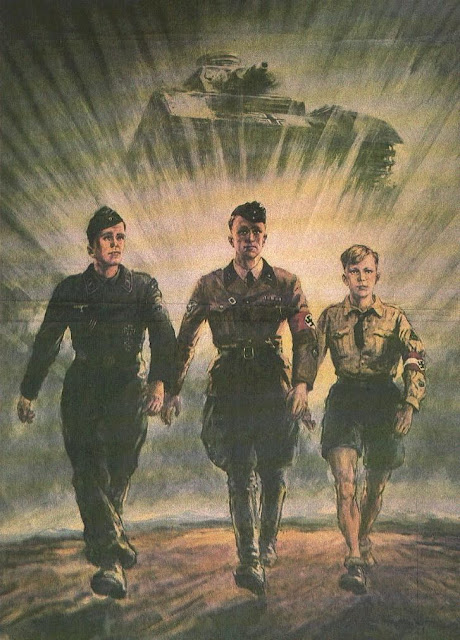 Added to that is the very real understanding that by, for instance, manning a Flak gun, you were defending not only your homeland but the lives of everyone you loved. Propaganda encouraged the young warriors every step of the way. Books telling the tales of heroic exploits by soldiers were the norm, but nobody in the books mentioned that they were complete fiction aside from the names and outcomes. 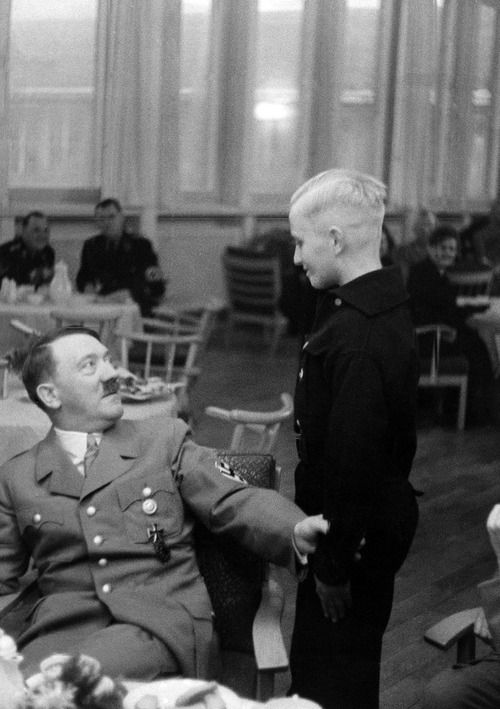 Thus, the youngest soldiers were often the most fanatical, and also the ones who were most determined not to give up.
The smart German boys, of course, recognized the self-abnegation resulting from their becoming cannon fodder for people who did not have their best interests at heart, and realized that they were only safe after they had surrendered. 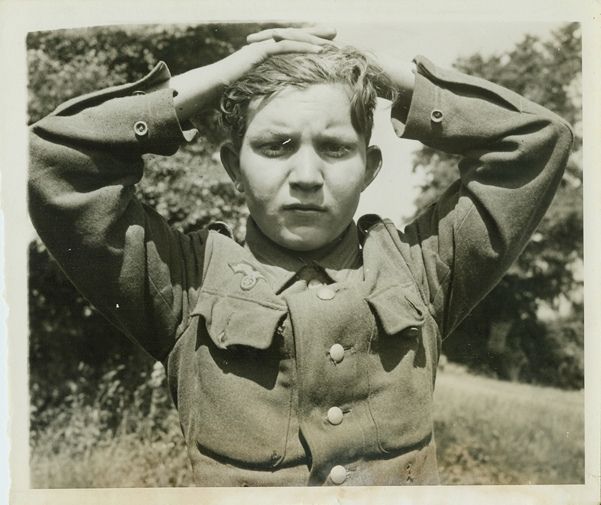 Still, it took an extreme act of will for a child with romantic notions of valor to 'give up' and admit defeat. It was especially difficult because surrendering took away all the shortcuts to prestige and pathways to success that had been laid out for them by everyone they knew. A boy could be taken seriously as a soldier when otherwise he would be just another face in middle school.
Child soldiers carried guns and fought. They were actively recruited by some combatants. The Germans were the most active in recruiting children for their Hitler Youth active combat formations such as the 12th SS Hitlerjugend Division. Since most schoolchildren were already manning anti-aircraft guns or performing other civil defense duties (spotlights, patrols), it was not quite as much of a leap in Germany to actually enlist as it would have been for children elsewhere. By late 1944, the Wehrmacht was taking anyone that could carry a rifle. 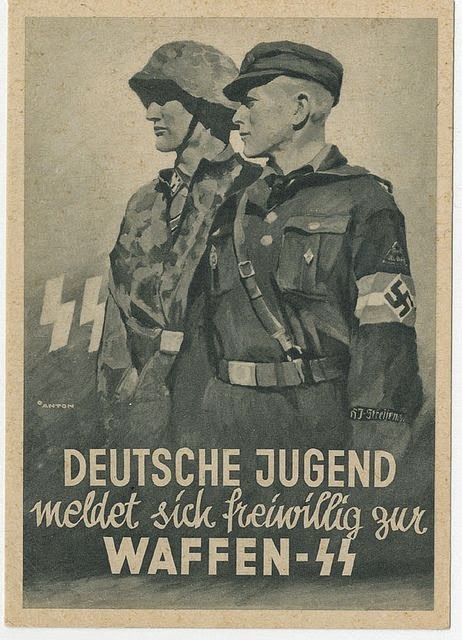 Children, of course, didn't know any better and were not ready to make adult choices. While from our perspective they fought for the enemy, it's possible for many to feel sympathy for them. The peer pressure on them and their lack of perspective doomed them. They joined up and many wound up dying for nothing.
It was heinous of their elders to think that was appropriate for boys of 10, 11, 12 years of age to carry a gun or ride in a tank. A huge fraction of them wound up dying or being maimed for life.
Many know of the famous Hitler Youth, led by Baldur von Schirach, and their SS Division. The 12th SS Panzer Division "Hitler Jugend" Hitler Youth Division saved the entire Western Front for Hitler and Rundstedt in August 1944 after the US breakout from Avranches. They prevented the British and Canadians from closing the northern escape route for the German armies fleeing from out of the Mortain pocket, preserving the so-called Falaise gap despite ferocious Commonwealth efforts to close it. Without their efforts, the German defense of the West would have entirely collapsed in 1944. Only a very small fraction of the boys survived, and those that did keep fighting for the remainder of the conflict. Hitler Youth were some of the last defenders of Berlin. Yes, they were fanatics, because they didn't know any better.
However, focusing just on the Hitler Youth is misleading. There were children serving on both sides of the conflict, in all armies.
The Chinese had many boys holding rifles, while the Soviets enlisted them as partisans and spies. Some underage kids snuck into the US and British armed forces.
The US and British Army and Navy recruiters weren't being too choosy under the circumstances, with the enlistment personnel not checking too closely for absolute age compliance during the darkest days after Pearl Harbour. While some later proudly proclaimed that they had enlisted at age 17, that was not supposed to happen. Boys also manned anti-aircraft and civil defense positions in Great Britain and Germany, downing bombers and fighting fires.
It is incorrect to state that the desire to use children as soldiers was monolithic or even tolerated by everyone in the German high command. Even in the closing days of the war, many thought that using children to fight was barbaric. However, the children were recruited and fought anyway. During the Battle of Berlin, for instance, German national leader (Reichsjugendführer) of the Hitler Youth (Hitlerjugend) Artur Axmann and his child soldiers formed a major part of the last line of the German defense. As in Normandy, the children were reportedly among the fiercest fighters. Kids don't have a developed moral conscience, so they make excellent killers when people who do have such consciousness tell them to kill.
The Berlin city commander, General Helmuth Weidling, ordered Axmann to disband the Hitler Youth combat formations as the Soviets closed in. Unfortunately, in the confusion, Weidling's order was never carried out. The remnants of the youth brigade took heavy casualties from the advancing Russian forces: only two survived. Axmann? He died of old age in Berlin in 1996. Children can fight and die when their elders choose to let them. Those that did should be remembered. They were just kids. 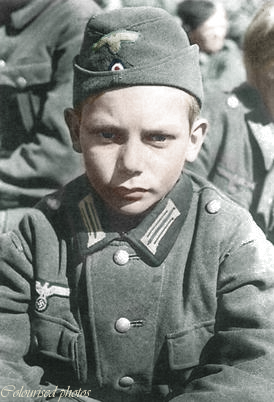 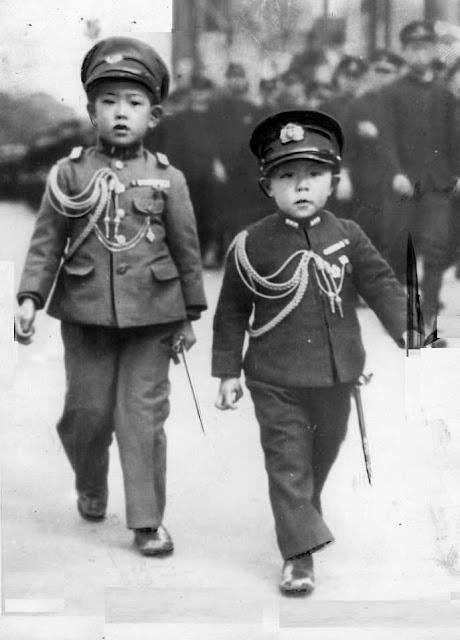 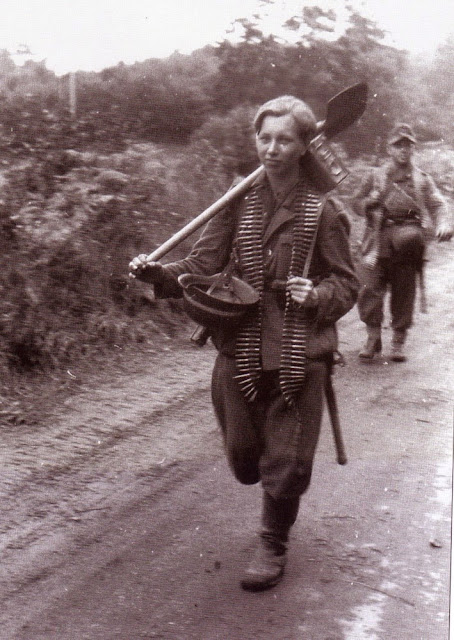 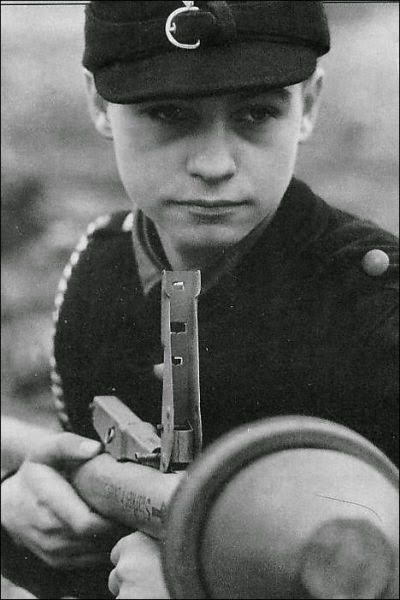 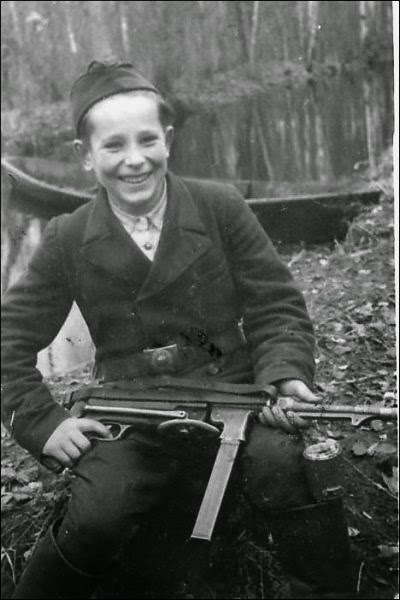 Lest anyone think that these pictures are heroic and the lads are enjoying every moment of their glory, here is one last photo that shows the reality - not the false hype and glamour - of war for children. 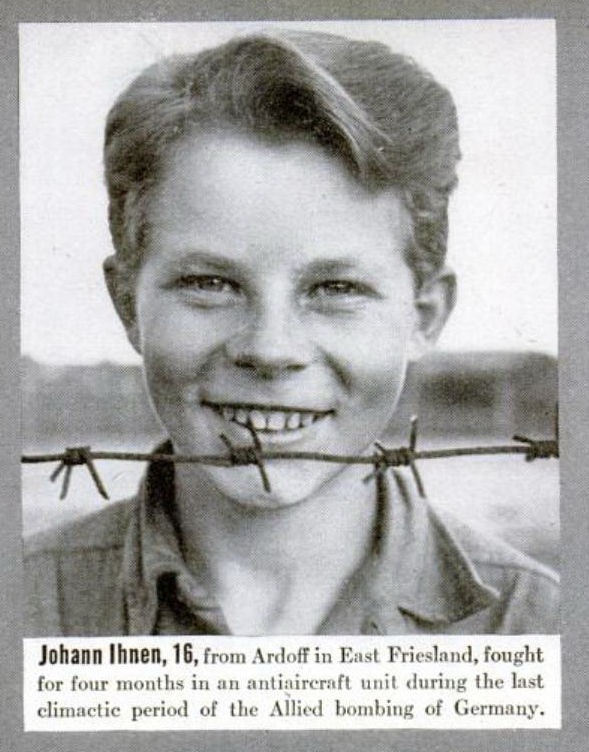 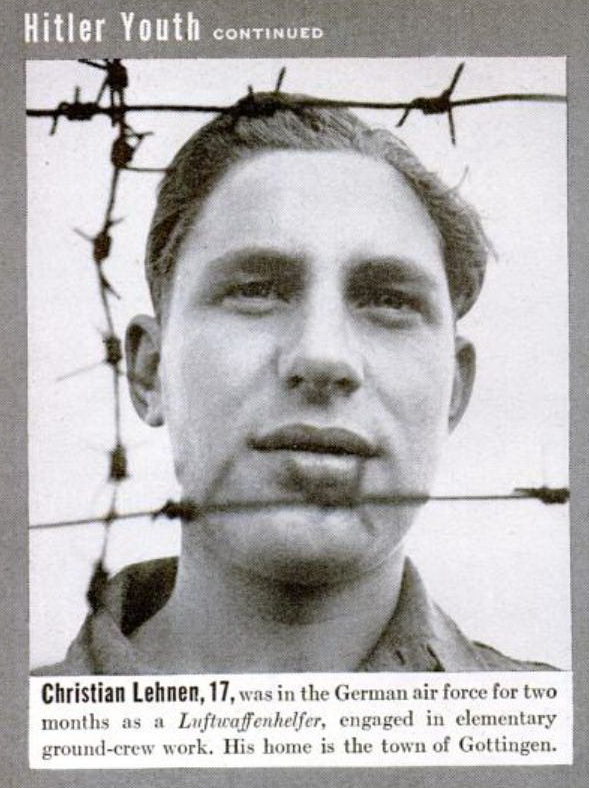 Well, we all know that the Germans sent their kids to die in defense of a lost cause. But certainly civilized British and Americans wouldn't do that, would they? Well...

It was against US policy to induct anyone under the age of 18. However, a few did sneak in. Well, more than a few. Many of them bragged about it in later years, but at the time, if they had let on about their true age, they would have been dishonorably discharged like the fellow below.

The British routinely sent children into harm's way. Oh no, you protest, this is just propaganda now! Actually, over 120 child sailors aged 15 and 16 died on the Royal Navy battleship HMS Royal Oak on 14 October 1939, and they weren't the only such children to perish. It was standard practice in the Royal Navy to embark such kids (officially called Boy Seamen) on warships as a sort of apprentice program. This was intended to create future leaders in the Royal Navy. When German submarine U-47 under the command of Guenther Prien torpedoed and sank the Royal Oak on 14 October 1939, these children perished in the same proportion as their elders. The incident created such a scandal that the Royal Navy was forced to in essence eliminate the program (against First Lord of the Admiralty Winston Churchill's strong opposition, mind you). But, you know how it is, wink wink, nudge nudge, a lot of boys still got on warships. The last living survivor of the Royal Oak, Arthur Smith, was a 17-year-old Boy, First Class (yes, that was his official title) when Royal Oak sank. He passed away on 11 December 2016 after giving interviews in which he admitted to still being haunted by the screams of dying men.

Oh, and for those who made it this far and perhaps think that this is merely a quaint historical topic that really has no bearing on the current world, the same thing goes on today. 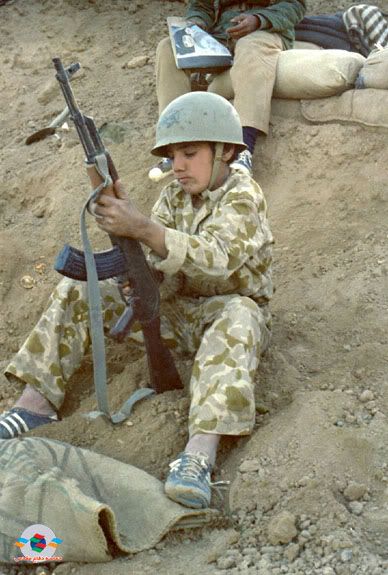