Hitler Loved to Pose with Children

I have another page full of pictures of Adolf Hitler. However, that is sort of a depository for any interesting Hitler pictures that I come across. Thus, it's a lengthy page without a specific sub-theme. It may take a while to load for some viewers. For convenience, I have broken out only those shots which show Adolf Hitler posing with children.

We all have heard of the tendency of politicians to kiss babies. Strangely enough, there aren't many - perhaps any - pictures of Hitler actually kissing any babies. I haven't found any, at least. 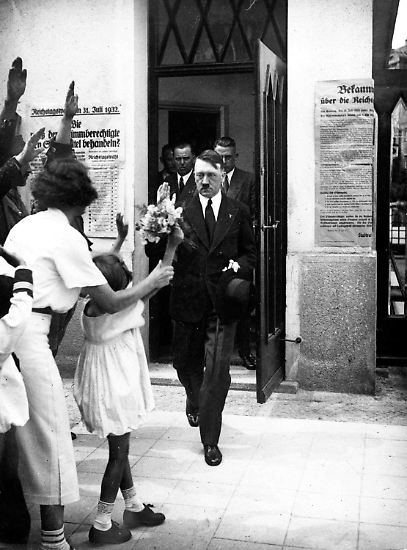 But he sure liked to pose with children. And they adored him.

Hitler at heart was a politician, though of course, he morphed into many other things besides that. Part of his myth-making method was to pose with children, the younger the better. Hitler thus went out of his way to pose with children. Entire events appear to have been stage-managed to insert him into some kind of camp outing or pageant. 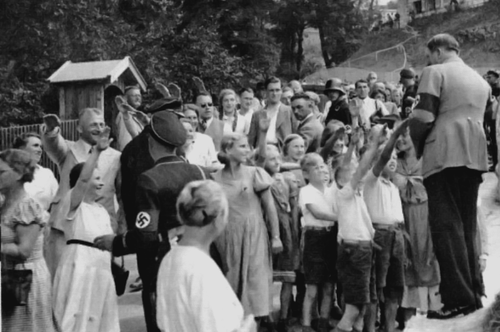 Many of these events were held on the Obersalzberg, the mountain home to his private residence in Berchtesgaden. This would have been a scenic outing for the children, and also quite convenient for Hitler.

Eva Braun often took these propaganda shots. It probably made the children feel at ease to have a woman involved in the process.

One child appears in many of these shots, which were intended to appear on picture postcards. The girl was named Rosa Berneli (or Bernile) Nienau, from Munich. Rosa visited on her birthday in the summer of 1933, and Hitler invited her out of the crowd and up to Haus Wachenfeld for strawberries and whipped cream. This particular postcard (the one above) was published with the caption "Thanks for the Birthday Invitation."

Hitler's personal photographer Heinrich Hoffmann (or perhaps Hoffmann's former assistant, Eva Braun) made maximum use of propaganda photos taken of the two together during this and other visits.

Hitler, with no children of his own, developed what may have been a genuine fondness for the girl. Unfortunately for propaganda purposes (for those times and that place), Rosa turned out to have a Jewish maternal grandmother. Martin Bormann abruptly ended the visits. However, Hitler did allow her to visit now and then thereafter despite knowing of her ancestry.

There were plenty of simple local families who were delighted to pose their children with the Fuhrer. Many of them may not even have known exactly who Hitler was - mass media did not reach into every remote cabin and cottage. However, Hitler obviously was a rich, important man, and in those days that alone counted for a lot.

Hitler used children as props during his rallies. In a typical scenario, some toddler who could barely walk would come out to hand Hitler flowers on behalf of whatever town he was visiting.

These little flower ceremonies apparently began when Hitler was campaigning across Germany before becoming Chancellor.
Flying in his personal Junkers Ju 52, Hitler would touch down at some town and wait for the child to bring him the flowers as a sort of homage (a word actually used on some postcards). Then, they would pose looking at each other with blinding smiles.

Hitler posed with boys and girls alike. Often, he appears to be sizing the boys up as future soldiers.

Naturally, all of the children were told exactly how to pose. Hitler did not just jump in behind them and get a snapshot. Invariably, the children would be smiling up at him adoringly or presenting him with some gift such as the obligatory flowers.

Hitler appeared to genuinely like the children. He was sort of a doting uncle. However, there is no question that, whatever he felt about them, the pictures were designed solely to further his image.

Just like today, the kids would line up to get Hitler's autograph.

Greeting the Fuhrer was considered a high honor. Getting picked out from the crowd to stand beside him with his arm on your shoulder was even better. Note how, in the photo below, he appears to have chosen the youngest boy in the group to stand next to him. This, of course, made him look bigger.

The overwhelming tendency was for Hitler to pose with children barely out of diapers. This presumably conveyed some of their innocence upon him. It also made him appear to be the protector of the most vulnerable. Another effect was to make Hitler appear to be the guardian of the future. 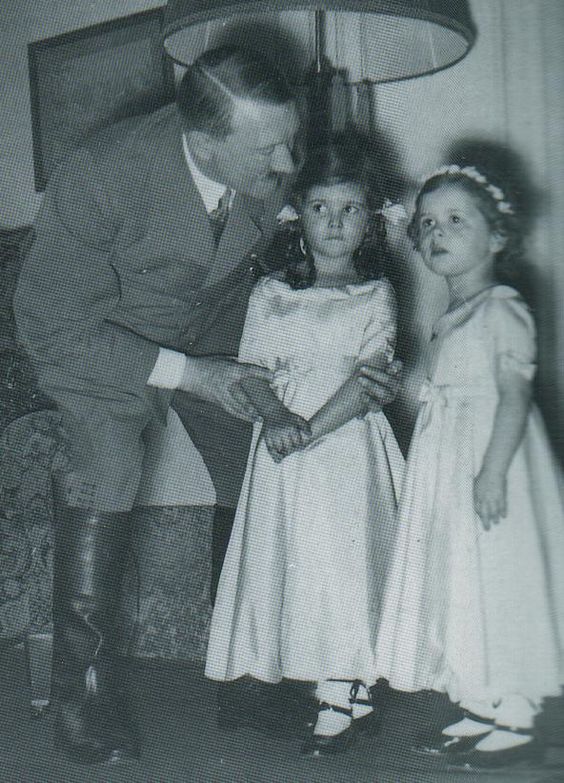 A more subtle purpose was to appeal to women - some of Hitler's most ardent supporters were women. In fact, Hitler put a lot of thought and effort into gaining the support of women. Hitler was the only rock star in the Germany of the '30s and early '40s. Appealing to his admirers' maternal instincts was part of the image.

Some of the shots show what Hitler was looking for. In the photo below, the young girl smiling broadly captured the right "look."

The same shot below, printed in color for a postcard. Once again, the girl has just the right look, looking playfully ahead.

Below, a girl at a typical flower presentation. Adolf Hitler being greeted by a child in front of his personal Ju 52, which places this picture to some time in the 1930s (he switched to a faster Focke-Wulf Fw 200 Condor when the war began in 1939). Note how perfectly the plane's swastika gets in the shot like a halo over Hitler's head. Hoffmann knew what he was doing. Below, another typical flower ceremony shot.