Workhorse of the Luftwaffe

The Junkers Ju 52 was the workhorse of the Luftwaffe. It was one of the best aircraft designs of the 20th Century and several remained in service throughout the second half of the century. Used in a variety of vital roles, the Ju 52 was as versatile as any aircraft ever built and is a testament to simplicity and dependability in design.

Ernst Zindel designed the Ju 52 in 1930 as an advanced version of the Junkers W 33, a 1920s seaplane that was the first to cross the Atlantic from east to west in April 1928 (not nonstop Paris to London or anything like that, but it got across). The Junkers Ju 52 had its origins as a seaplane but was adapted to land use.

The W 33 was a single-engine plane and so, at first, was the Ju 52. In its original configuration, which first flew on 13 October 1930, the Ju 52 had either a BMW IV or Junkers liquid-cooled V-12 engine. However, with the Ju 52's increased size from its predecessor, it was decided to put engines on the wings as well for greater lift.

This was an excellent solution that turned a mediocre design into a classic. The design change also gave the Ju 52 a distinctive trimotor appearance that resembled many Italian aircraft of the period but was unlike almost any other Luftwaffe aircraft.

The other distinguishing feature of the Ju 52 was its corrugated duralumin metal skin. This wasn't a new development, having first been used by Junkers during World War I, but it was still unusual at the time. 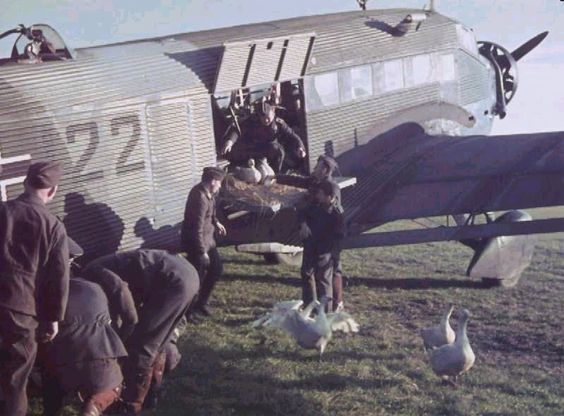 The duralumin gives the plane the appearance of a toolshed or barn with a tin exterior, hence "the flying toolshed." A low cantilever wing whose midsection is built into the midsection completes the craft's distinctive but durable design. The radial engines were licensed BMW 132 770 hp knockoffs of Pratt & Whitney engines.

Early on, the designers or Luftwaffe high command (Reichsluftfahrtministerium or "RLM") or someone else decided to take the plane's primary version a land aircraft. It was another very wise choice. The floatplane look, though, is classic.

One of the first Ju 52s that came off the assembly line in 1932 was sold to Canadian Airways. From the very first, that plane was rugged, being used to supply remote mining operations and able to land on wheels, skis or skids. Subsequent German versions were sold as 17-seat airliners at a time when most airlines were still using biplanes. Lufthansa used the Ju 52 on routes within Europe and to Asia and South America.

The military potential of the Ju 52 was obvious, and the RLM wasn't the only one that recognized it. Colombia and Bolivia used them in the early 1930s as floatplanes and cargo transporters. The Germans were beginning to secretly plan their future Luftwaffe, so Junkers designed a bomber version capable of carrying 3300 lb of bombs and two standard 7.92 mm MG 15 machine guns. The guns were in an open dorsal position and retractable ventral position, good protection for the day but outmoded quickly during World War II. Even when set up as a bomber, though, the Ju 52 remained capable of carrying heavy conventional cargo loads.

During the Spanish Civil War, the RLM tested the Ju 52 as a bomber. One of its missions was to attack the town of Guernica, which was completely devastated even though very few bombs were dropped relative to World War II terror bombings. Ju 52 played the most decisive role of its entire career in this 1936-1939 conflict, serving as both a bomber and a cargo plane. Hitler remarked, "Franco ought to erect a monument to the glory of the Junkers Ju 52. It is the aircraft that the Spanish revolution has to thank for its victory." Franco, of course, survived the war and ruled Spain into the 1970s.

Ju 52s also were used in a bomber version during the Polish campaign in 1939, but after that, more recent bombers were available in sufficient numbers so that the Ju 52 could be restricted to other uses, such as its primary cargo role and as a transport.

The newer bombers were faster and thus less vulnerable, though their bomb loads weren't any bigger than those of the Ju 52. The primary problem with the Ju 52 was that it was vulnerable to enemy fighters, flak and, well, pea-shooters and bows and arrows and anything else the people on the ground had handy.

The Ju 52 was so versatile and dependable, however, that the RLM perpetually was enticed into introducing it into combat zones despite the obvious risk. Sometimes, it paid off. During the invasion of Denmark and Norway in April 1940 (Operation Weserübung), Ju 52s were used extensively as troop transports. They could carry 20 fully equipped soldiers and thus could land and seize enemy airfields by themselves (there is a scene in "The Guns of Navarone" (1961) where a German general makes reference to its carrying capacity). Since air defenses by these particular Scandinavian countries were minimal, this worked out quite well during this operation and few Ju 52s were lost.

The next month, when Germany launched Case Yellow against France, the Netherlands, and Belgium, Ju 52s were used again to deliver paratroopers to The Hague. This time, however, air defenses were waiting, and the slow Ju 52s were an easy target: 280 were lost. It was well worth it to defeat Belgium, Holland, and France, but it was an unmistakable warning sign.

Paratroopers were used extensively in the Battle of Crete (Operation Mercury) in May 1941, and once again the Ju 52 was called into service as the transport. The Ju 52 was a stable platform with a good carrying capacity that flew relatively slowly, making it a good aircraft for paratrooper use.

The paratroopers ultimately won the battle in a very close call, but the few British Hurricanes and Spitfires on the scene made short work of many of the lumbering (165 mph) Ju 52s that they could find. The Ju 52s also were very vulnerable to anti-aircraft fire, flying straight and level and slow in broad daylight to deliver the paratroopers. Hundreds more were lost.


This Ju 52 vulnerability obviously was a growing problem. It was exacerbated by aggressive tactics by Luftwaffe General Kurt Student, who sent hundreds of Ju 52s into the Crete maelstrom in order to pull out a very narrow victory there. While the Germans successfully evicted the Commonwealth troops from Maleme Airport on Crete and thereby secured the island, they left behind many destroyed Junkers Ju 52s both on the airfield, in the surrounding fields, and at the bottom of the Mediterranean.

From then on, more and more Ju 52s were shot down when they ventured into active combat zones, including the desperate attempt to supply trapped 6th Army at Stalingrad during the winter of 1942/43. However, the Luftwaffe had no choice, other cargo planes were in short supply. Bombers such as the Heinkel 111 could be used as cargo planes, but were not designed for that role and were in any event needed as bombers. Sometimes the only way to get food and ammunition to starving soldiers was via the reliable old Ju 52, regardless of the inevitable losses.

By this point, January 1943, the Germans should have learned their lesson, but the truth of the matter was that the Ju 52 was their best cargo aircraft and, if only it could make it to the supply point and return, it solved many problems. Once again a fleet of Ju 52s was sent to supply a trapped army, this time the Panzerarmee Afrika in Tunisia during March-May of 1943, and at first, the operation succeeded. Unlike at Stalingrad, the weather and enemy antiaircraft guns were not factors, and unlike at Crete, the planes were flying into occupied territory where people weren't shooting at them. Italian cargo vessels at the time were being sunk at a 50% rate, so air supply by Ju 52s was what kept General Arnim's troops in being. The Ju 52s were making the phenomenal total of 150 landings a day in occupied North Africa, and that still was barely enough to keep the Axis forces fighting. But it was better than nothing.

However, the Allies were near and closing in. Knowing that in the desert the entire situation revolved around supply, the Allies noticed the Ju 52 supply flights and developed a plan, Operation Flax, to strangle the German supply line once and for all. It was implemented on April 5, 1943, with the mission to shoot down every Ju 52 in sight. The operation was a huge success and continued throughout April, culminating in the famous "Palm Sunday Massacre" when not only dozens of Ju 52s were shot down, but also a crippling number of the huge Me 323 Gigant transports. Without supplies, Arnim's forces were helpless, and after holding their own for months they now were forced to surrender only three weeks later. It wasn't the fault of the Ju 52, it was a direct result of the Axis losing control of the airspace over its supply routes and airfields.

After that, the Ju 52 was used only in safe zones, such as in Russia behind the lines, and relatively few of the depleted number remaining were lost out of the total 4845 produced.

Adolf Hitler, incidentally, had used a Ju 52 as his personal transport throughout the 1930s until switching to the four-engined Focke Wulf Fw Condor in 1939, so he always had a sweet spot for the plane.

It appears to be a Ju 52 shown in the opening scene of classic Humphrey Bogart film "Casablanca," being used as a transport, and also the plane that is waiting at the airport at the end of the film.

Now used properly by the Germans, the Ju 52 remained a very valuable aircraft until the end of the war. The more Germany lost control of its own airspace, though, the more vulnerable it became, but that was the case with pretty much every Luftwaffe aircraft. A good pilot with experience could usually figure out a way to get to his destination despite the enemy unless they were lying in wait - as in the Tunisian incident.

Many other nations saw how valuable the Ju 52 had been for the Germans during World War II, and afterward, they wanted their own copies. Second- and third-tier air forces such as those in Portugal and Switzerland used the dependable workhorse for decades after the war, the Swiss especially prizing it because it performed reliably at altitude. The Swiss kept their last three in service until 1982, and they remain in flying condition to this day. The Spanish Air Force used the Ju 52 to train parachutists into the 1970s. The Ju 52 is unique among Luftwaffe aircraft in remaining in production after the war, in France and Spain. The Spanish versions are called the CASA 352, and four CASA 352s remain in regular use today.

The Ju 52 was and remains an incredible aircraft. Long after the fancier cutting edge aircraft of the day were surpassed, the lowly Ju 52 remained a useful and reliable tool. That is one of the lessons of World War II: not only is the fanciest and latest technology not always necessary to get the job done, sometimes it is worse than dependable older technology. When the top planes of the 20th Century are remembered, the Ju 52 should be included.