Each country in World War II issued recruiting posters. The German posters were often quite artistic, with the Propaganda Ministry under Josef Goebbels taking great pride in its work.


The SS recruiting posters were the most radical of all German recruiting and propaganda posters. They often were quite colorful and clever in their themes. 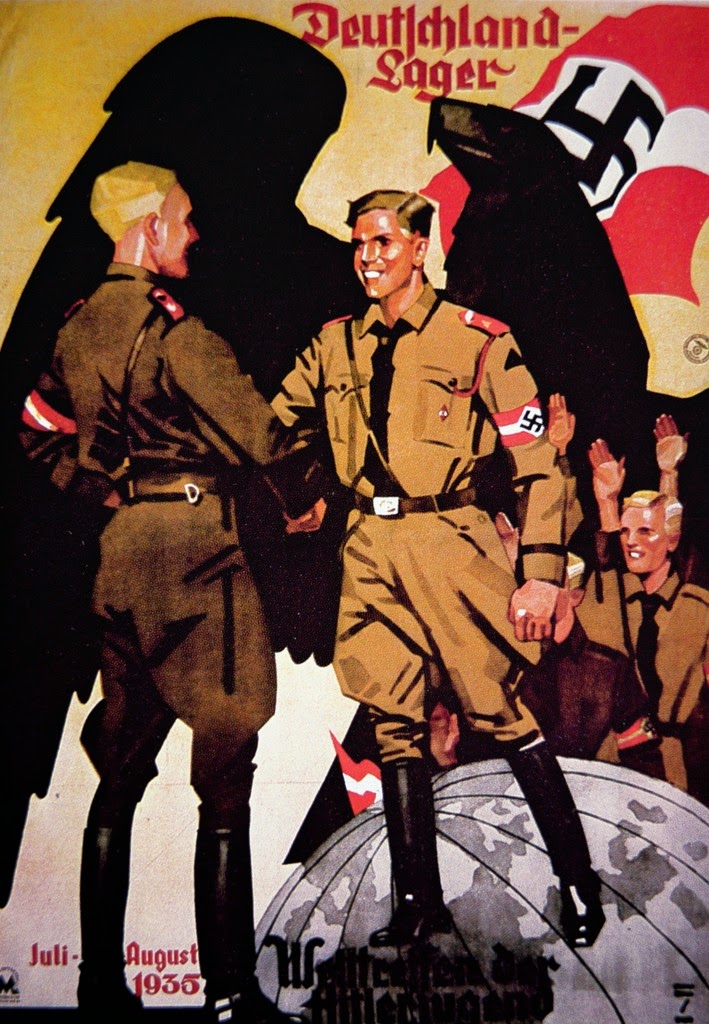 Several dominant themes are evident in this sample of recruitment posters for Heinrich Himmler's SS. They appeal to the rawest emotions of the viewer. 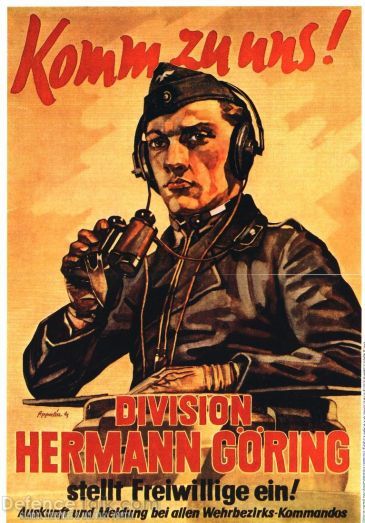 That is what is most distinctive about Axis posters - their appeal to raw emotion that resonated with people consumed with fear and hatred of the enemy rather than rationality.


The "Liberators" poster above uses the English word for the American bombers and uses it to apply all sorts of double meanings and crude references to standard German propaganda targets. However, the themes are given in a scattershot fashion that you will likely miss at first glance. Using the word "Liberators" - it was extremely rare in German posters to use English words - in a German propaganda poster is a sure sign of how far the US bombers had intruded into the German national consciousness.

Let's go through the major themes in these types of posters.

First, what is emphasized is defense of the homeland - who can argue with that? That is what people want today, not just during World War II.


Naturally, the posters don't go into the details of why the homeland had to be defended because of who started the war, which of course was a bone of contention all its own. But everyone in Germany realized the extent of Allied bombing raids and how destructive they were.


Second, nationalism is evoked with references to ancient archetypes and national symbols. There are pictures of medieval knights and castles interspersed among modern SS soldiers, with the clear implication that contemporary service is as honorable and noble as that of Prusian Knights of old. There are very subtle racial appeals that fuse with this theme.


Naturally, the nationalist appeals had to be tailored to the particular nation where the poster was being shown. Posters designed for the Nordic countries were vastly different than those used in Italy. 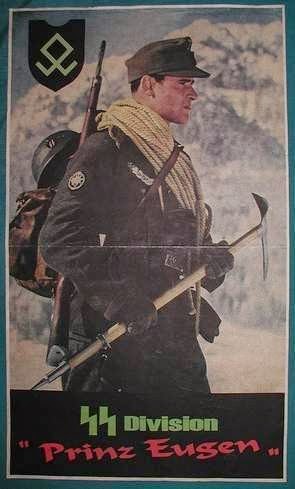 Third, the clarion call of fighting Bolshevism appears over and over. This was one of Hitler's preoccupations, of course, and dovetailed with the "defending the homeland" theme. Hitler hated communism, and he knew that many other Germans did, too. It was a clever way to turn a war started for imperialistic reasons into a war of more fundamental ideologies and ways of life. The Italians were not too worried about the Russians, but the people of Germany and its allies closer to the Soviets - the Finns, the Hungarians, the Romanians, the Bulgarians - had great reason to fear the imposition of Soviet Communist rule (and with good reason, given post-war events).


For these reasons, different posters were issued for different nationalities. These posters were more successful than one might think. Not everyone in every conquered nation harbored a grudge against the conquerors. Among the last defenders of Hitler in burning Berlin were the Belgian Rexist Léon Degrelle and the French Charlemagne Division. Hitler considered Degrelle something akin to the son he never had, and Degrelle somehow managed to survive the war despite numerous close calls and was proud of his fascist associations until the day he died in 1994. 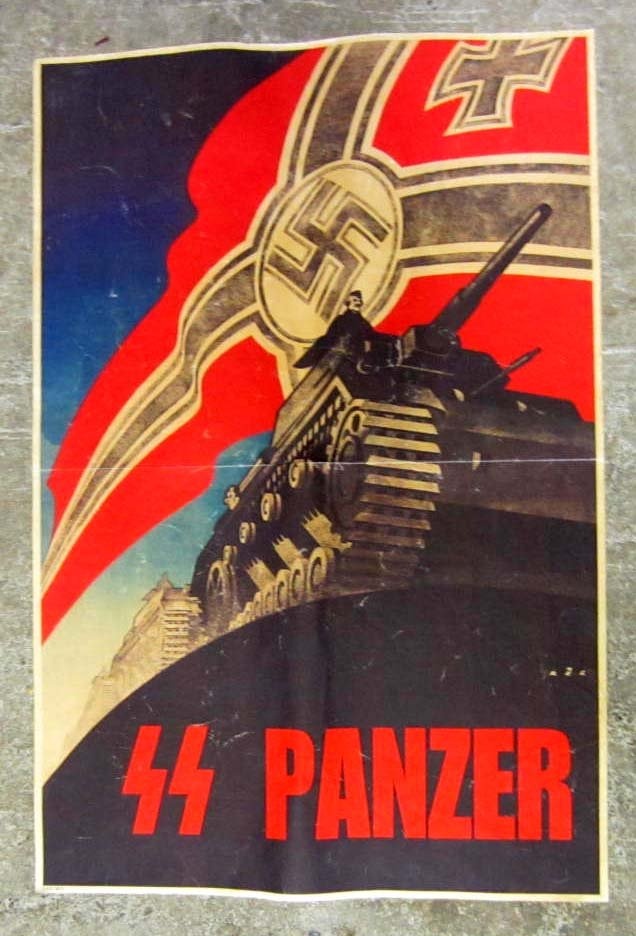 There is another reason some of the German posters were successful: they contained a grain - just a grain - of truth. Posters depicting the war in Russia as a merciless struggle of ideologies were accurate - if you filtered out the reasons why the war was originally waged, the horrible depradations of the Germans themselves in Russia, and you were willing to unquestioningly accept a revisionist rationale which pretty much everyone knew was nothing but an argument of convenience. The posters depicting the Allied airmen as babykillers were accurate to an extent, because there undeniably were babies being killed (along with everyone else) by the indiscriminate Allied air raids. Many people would have known of someone who lost someone near and dear, that's just a fact of war.


Once again, though, you had to filter out that the raids were completely legal according to the rules of war, that the Germans had institutionalized the terror raid as part of what became known as their 'blitzkrieg,' that the Germans themselves were launching air and eventually even missile raids, and that German leaders who allowed these raids to continue because of their uncompromising war aims were at least equally culpable. However, even in England there was a substantial body of opinion during the war that mass raids on poorly defended civilian targets of any nation were detestable and immoral. "We should not take the devil as our example" is the way it was put, and it is hard to argue with that line of argument. The posters thus raised legitimate moral questions that had just enough truth to be somewhat effective, especially in the absence of any rebuttal. That makes for the most effective type of propaganda.

The Germans ramped up their recruiting efforts after Stalingrad, when Goebbels instituted the "Total War" strategy. By 1945, pretty much everyone was being taken into the armed forces, with the Home Army ("Volksturm") composed of older men, often practically unarmed and in street clothes.

By war's end, because of this extensive recruiting, the SS had divisions of Muslims, French, Belgians and other nationalities and ethnic groups.

Another underlying message is that the Allies were not the moral paragons which they liked to portray themselves as. This theme became prevalent in the closing days of the war, when everyone could see the destruction caused by Allied bombs.

Bund Deutscher Mädel: at first, the League consisted of two sections: the Jungmädel, or Young Girls League, for girls ages 10 to 14, and the League proper for girls ages 14 to 18. In 1938, a third section was introduced, the Belief and Beauty Society (BDM-Werk Glaube und Schönheit), which was voluntary and open to girls between the ages of 17 and 21.