US Presidents at War 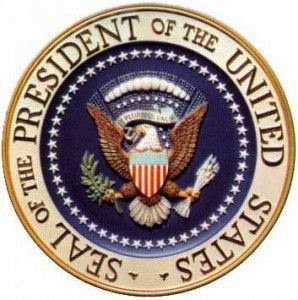 Dwight D. Eisenhower was the 34th US President.

"Ike," as he was fondly called, became a five-star general in the United States Army during World War II and served as Supreme Commander of the Allied Forces in Europe; he had responsibility for planning and supervising the invasion of North Africa in Operation Torch in 1942–43 and the successful invasion of France and Germany in 1944–45 from the Western Front. In 1951, he became the first supreme commander of NATO, and in 1953, US President.


Ike is one of the few US Presidents, along with George Washington and US Grant, whose war exploits arguably overshadowed their fame as Presidents.


John F. Kennedy was the 35th US President.

JFK was a Lieutenant (jg) in the US Navy, a Senator, and US President.

Everybody loves and honors John F. Kennedy. Well, pretty much everybody. I don't think I've ever met anyone who didn't.

Lyndon Baines Johnson, or LBJ, as he was universally known, was the 36th US President.

LBJ was an anomaly among Presidents who served during World War II. He was a Roosevelt Democrat who was a Congressman when Japan bombed Pearl Harbor. Johnson, still in Congress, became a commissioned officer in the Naval Reserve. He then asked Undersecretary of the Navy James Forrestal for a combat assignment, but was deemed too valuable to risk. Instead, LBJ was assigned to inspect shipyard facilities in Texas and on the West Coast.

Soon after this report, Roosevelt ordered all active-duty Congressmen back to Washington.

Richard Milhouse Nixon was the 37th US President.

"Dick" Nixon, as he liked to call himself, was a Quaker, and thus could have avoided serving during World War II had he applied for a deferment. However, to his credit he not only did not attempt to avoid service, he applied for acceptance to Officers Candidate School. Nixon was commissioned as an ensign in October 1942.

His first post during the war was as aide to the commander of the Naval Air Station Ottumwa in Iowa. Wishing to see action, Nixon requested sea duty and was reassigned as the naval passenger control officer for the South Pacific Combat Air Transport Command, supporting the logistics of operations in the South West Pacific theater. This included some of the major battle zones of the war, including Guadalcanal. He spent much of his time checking manifests of cargo aircraft. He received an official letter of commendation for his service.

On October 1, 1943, Nixon was promoted to lieutenant after earning two service stars. He was appointed the administrative officer of the Alameda Naval Air Station in California, his home state, and then, in January 1945, he was transferred to the Bureau of Aeronautics office in Philadelphia. There, he helped to negotiate the termination of war contracts, and he received another letter of commendation for his service.

It is easy to denigrate President Nixon's service as purely bureaucratic and administrative. However, he served in active combat zones and did a job that needed to be done. He didn't have to be anywhere near the military had he so chosen, and then he could have spent his time in a backwater, but he actively chose otherwise. Among all of those who served, Richard Nixon deserves at least as much credit as anyone else for volunteering and serving, though he did not have any glamorous combat action.

After winning the Presidency, Nixon ended the Vietnam War, saw the first men land on the Moon, went to China, and signed into law major legislation to make the country's air and water cleaner. He was forced to resign for unlawful political activities in 1974, but staged one of the most remarkable comebacks in American life, becoming an elder statesman until his passing in the mid-1990s.

Gerald Ford was the 38th US President.

President Ford was a most unusual President: he was never elected. Instead, he finished out the remainder of President Nixon's term after Nixon resigned. He lost an extremely close Presidential election to Jimmy Carter in 1976.

James Earl Carter was the 39th US President.

"Jimmy," as he called himself in political races, enrolled at Georgia Southwestern College in Americus. Later, he applied to the United States Naval Academy and, after taking additional mathematics courses at Georgia Tech, he matriculated there in 1943. Carter graduated 59th out of 820 midshipmen at the Naval Academy with a Bachelor of Science degree with an unspecified major, as was the custom at the academy at that time.

After serving in both the Atlantic and Pacific U.S. Submarine Fleets, Jimmy Carter attended graduate school at Union College, majoring in reactor technology and nuclear physics. While technically not on active service during World War II, Jimmy Carter was enrolled at the Naval Academy during the conflict and thus was in uniform during the last two years of the war. During his service after the war, Carter became an expert on nuclear propulsion systems for the Navy. 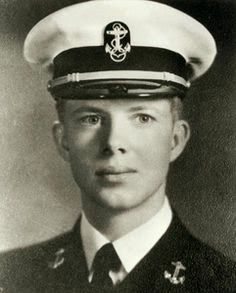 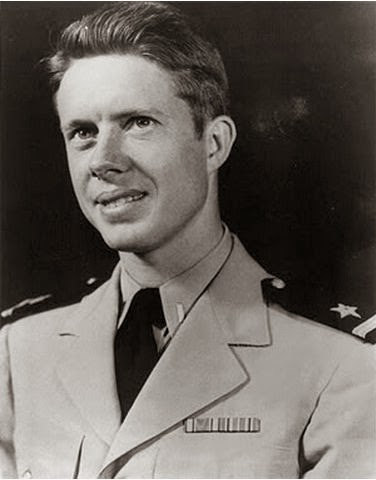 Ronald Reagan was the 40th US President. 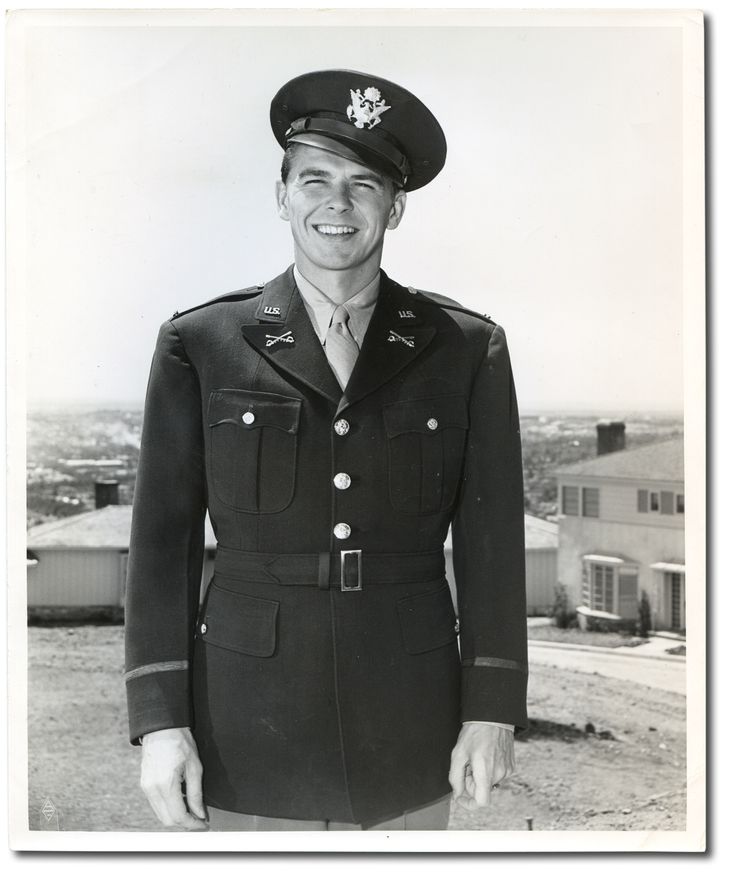 "Ronnie" Reagan, as he was nicknamed, was an established Hollywood star upon the outbreak of World War II. He was one of the very few celebrities who was a part of the military even before September 1, 1939. Reagan enlisted in the Army Enlisted Reserve on April 29, 1937, as a private assigned to Troop B, 322nd Cavalry at Des Moines, Iowa. He was commissioned a second lieutenant in the Officers Reserve Corps of the cavalry on May 25, 1937.

As a reserve, Reagan was eligible for activation, and indeed he was called up on April 18, 1942. He was classified as near-sighted, so Reagan had only limited service options. His first position was at the San Francisco Port of Embarkation at Fort Mason, California, as a liaison officer of the Port and Transportation Office. He then applied for, and was granted, a transfer from the cavalry to the Army Air Force on May 15, 1942. He was assigned to AAF Public Relations and subsequently to the First Motion Picture Unit (officially, the "18th Army Air Force Base Unit") in Culver City, California. On January 14, 1943, he was promoted to first lieutenant and promoted to captain on July 22, 1943. In 1945, Reagan was recommended for promotion to Major, but the war was winding down by that point and the promotion request was disapproved.

By the end of the war, Ronald Reagan's film units had produced some 400 training films for the AAF, of inestimable value to the Allied cause. 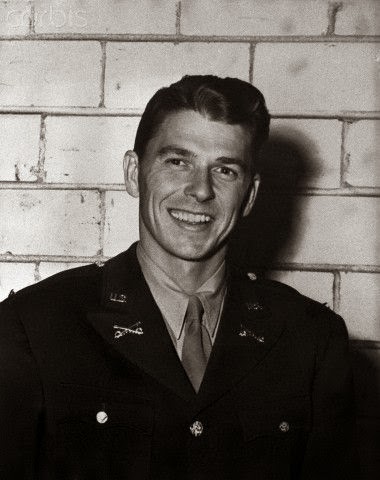 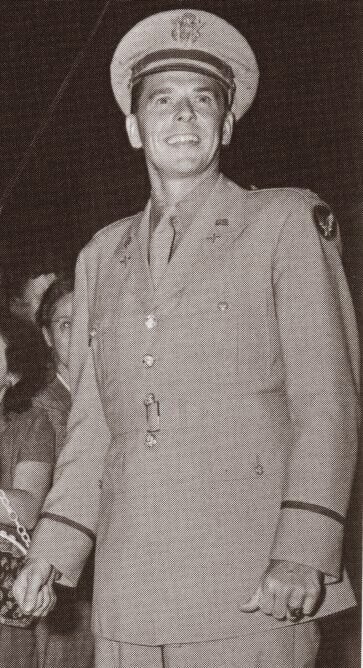 George Herbert Walker Bush was the 41st US President.

George Bush enlisted in the US Navy upon graduation from  Phillips Academy in 1942 and became a Naval Aviator. After training, he was commissioned as an Ensign on June 9, 1943, the youngest ever up until that time.

Bush participated in the Battle of the Philippines Sea and received promotion to Lieutenant (junior grade) on August 1, 1944. He piloted a Grumman TBM Avenger aircraft from VT-51 that attacked the Japanese installations on Chichijima. His flight mates were shot down and beheaded by the Japanese on the island: Bush, engine on fire, managed to bail out over water and was rescued by a US submarine, the USS Finback, a lucky break. 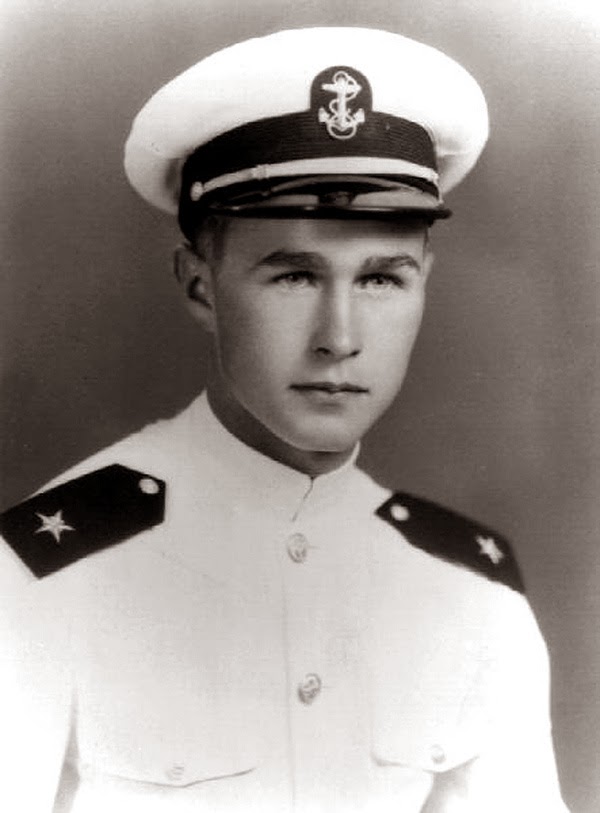 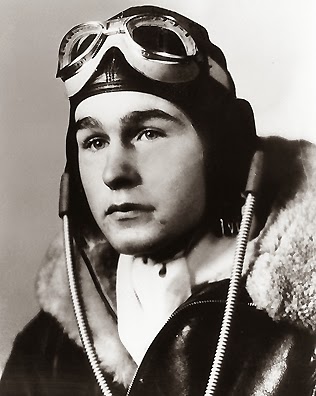