The Diamantis Affair: Humanitarianism at Sea 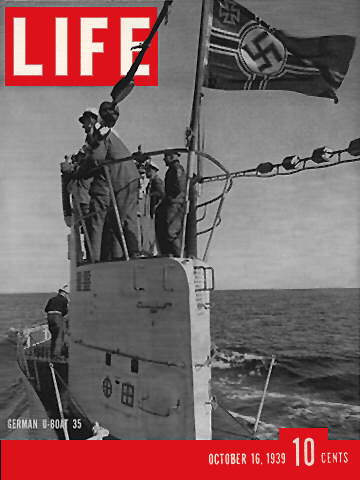 The German U-boat fleet was active throughout the war and never was defeated. Its predations lessened with time due to effective counter-measures, but right up until the last days of World War II they were sinking large allied vessels. The thought of being on a ship that was torpedoed was terrifying, so U-boats came to be portrayed as beasts from Hell. The reputation grew that U-boat crew were so pitiless that they would routinely machine-gun the survivors of the ships that they sank.


My favorite example of this is episode 10 of "The Twilight Zone," "Judgment Night." In this Rod Serling classic, a U-boat Captain is forced to re-live his attack on a British merchant ship over and over through all eternity. Another example of the U-boats' vile reputation was in the more recent "U-571" (2000), which contained a stereotypical scene of the evil Germans machine-gunning people in the water.


No single article can destroy such an enduring stereotype. In fact, there are almost no known instances of U-boats acting that way. However, it always is possible that some did, but nobody lived to tell the tale (the machine-gunned passengers obviously couldn't, and U-boat crew had a 75% chance of dying in their boats). Now, if it happened a lot, there would be accounts of it happening, but there aren't. In any event, rather than try to prove a negative, let's recount a quite different tale regarding a U-boat and the ship it sank.

Actually, our story begins in broad daylight, at 13:15 on 3 October 1939, in fact. The 4,990 Greek freighter Diamantis was shipping managanese ore from Pepel, Sierra Leone to Barrow-in-Furness in northern England. It was 40 miles west of Ireland in rough water. U-35, a Type VIIA submarine sailing nearby, was having a successful cruise, having just sunk a merchant ship, the Suzon. Kptlt. Werner Lott was a good U-boat captain who followed the rules even when many others weren't: he had stopped the Suzon and verified that it had war materials before putting the crew in lifeboats and sinking the freighter. Berlin, in fact, had only days before (30 September 1939) notified the English that U-boats no longer were going to bother with inspections and so forth because the British were disguising armed warships as merchantmen. Lott even had let a British trawler go without sinking it because he knew the sailors could not make it to shore.


After spotting the Diamantis, Lott went through his usual routine. He stopped the freighter and prepared to inspect it. The Greek crew, however, completely misunderstood Lott's intentions and immediately abandoned ship. After sinking the freighter, Lott looked over and saw that the Greeks' lifeboats were inadequate to the heavy seas. He recalled:


In the rough weather I would not have been able to examine the ship's papers, so I gave a signal to follow me. I wanted to go to the Irish coast where I knew there would not be such rough weather. They did not follow me so I fired a shot from my gun at the bow of the boat. This had the result that the crew panicked and jumped into the small boats. One could foresee that with the rough seas that they would overturn.

Lott picked up the 28 Greek sailors and went on its way.


Paderas Panagos, the master of the Diamantis, later said that Lott asked him where he would like to be landed, and Panagos replied "England." Lott could not do that, but he did the next best thing. He gave them food and cigarets and turned his U-boat east. The next day, 4 October 1939, Lott made landfall. The U-35 entered a bay in County Kerry. Several residents of Ventry and Ballymore were astounded to see a U-boat enter their harbor at 0:530 as bold as brass. It launched a dinghy and sent ashore its 28 passengers. Then, Lott turned around, slowly exited the harbor, waved to the onlookers, and went back on patrol.


The Diamantis was the last ship that Lott ever sank. U-35 continued the remainder of its patrol, which was almost over, uneventfully. On 12 October 1939, it returned to Wilhelmshaven, where Lott reported what had happened. by Admiral Karl Donitz was not impressed and reprimanded Lott for jeopardizing his U-boat unnecessarily. Lott remained in command, however, and left for his next patrol in U-35 on 18 November 1939. Eleven days later, on 29 November 1939, he was attacked by the British destroyers Kingston, Icarus, and Kashmir (Lord Louis Mountbatten, commanding). Due to damage, Lott was forced to scuttle his U-boat. Mountbatten, in an extraordinary act of kindness, sent over boats to pick up the U-boat crew (at great risk to themselves). Every man on the U-35 was taken into captivity and survived the war. It was the best possible outcome for them.


The story of Lott's humanitarian gesture spread around the world long before he wound up in a prisoner of war camp. Life Magazine put a picture of him and the U-35 on the cover of its October 16, 1939 edition. There was a political dimension to this: the owners of Life were isolationists, and portraying a German U-boat captain in a positive light helped the cause. In addition, the government of neutral Eire did not want it to appear as if they were aiding the U-boat effort. Lott and the rest of his crew were transferred to Canada POW camps in early 1940, and the incident was forgotten.

Well, not quite forgotten. However, it did not make much of an impression on the public view of U-boats and their evil captains. Lord Mountbatten, however, understood the truth, and he and Lott became good friends for the remainder of their lives. The people of Ventry also remembered, though it took them some time to do anything about it. On 17 October 2009, residents of Ventry and various dignitaries - including the current German ambassador - gathered to commemorate a memorial to the strange tale of U-35 and the Diamantis.


Some people will never forgive Germans for what they did, and that is how it should be. Nobody is trying to prove that all U-boat captains were saints and that they only saved, and never took, British (and Greek) lives. However, the common perception of U-boat crews and the reality are quite different. They were human beings with many good apples among them as well as bad. By recalling the tale of Captain Lott and the Diamantis, and similar events such as the Laconia Affair, we perhaps can see that even in the midst of horror, their can be a few angels' bells tinkling. 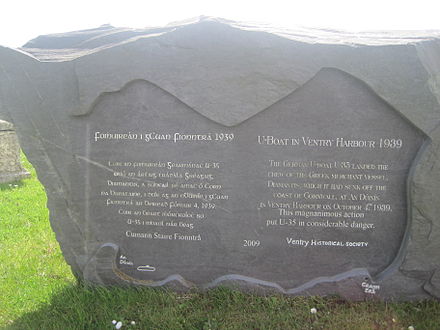