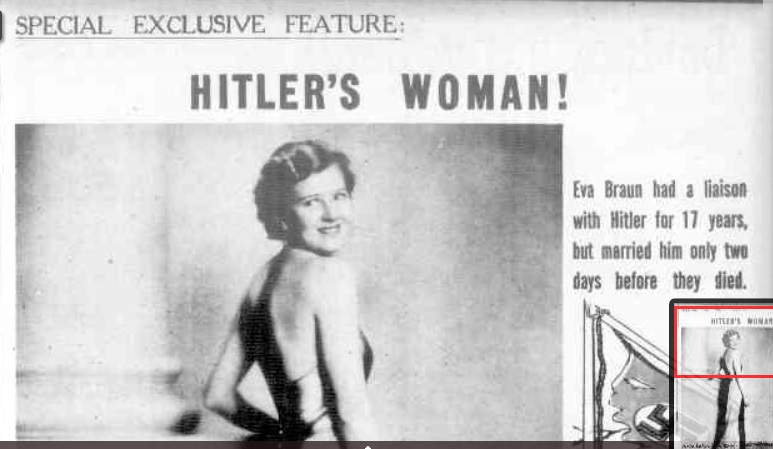 
Eva's film is in color, which is quite unusual for the time period. Color film was many times the cost of black and white film, both to purchase and develop, but no cost was too great for the Fuhrer's mistress. Because of that, we have exceptional footage of Hitler, Berchtesgaden, a cruise and other vacations that Eva went on, and Eva practicing on the parallel bars and going swimming and everything else that she liked to do.


Eva was a big-time photographer and had unlimited access to her subject, much like, say, Linda McCartney and Paul McCartney. It is film taken by someone who knows how to use a movie camera.


Eva rather ostentatiously created (now quite helpful) title cards for the films, for unfortunately there is no sound. Home movie cameras of the time, no matter how fancy, did not yet have microphones - recall that talkies themselves were not even a decade old at the time of some of this footage. However, modern advances in lip-reading technology have deciphered some of the dialogue.


Seriously, these films look like they were only shot ten or twenty years ago, not at a time when virtually all Hollywood films were shown in black and white. Some scenes are also in slow motion, which did not become a television network staple until the 1970s. 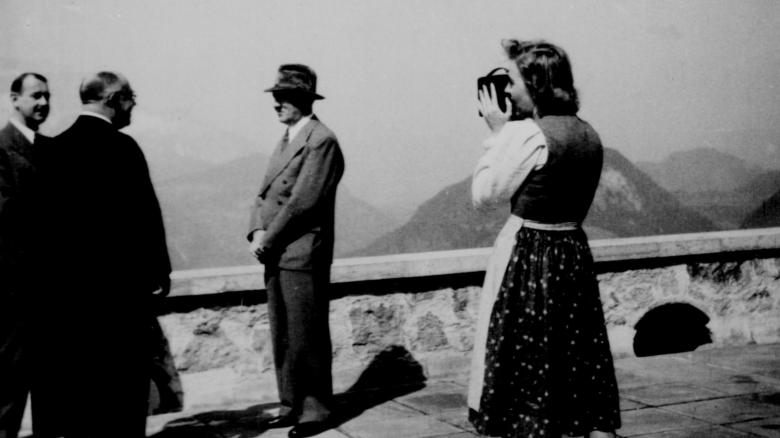 
Everybody who came to visit the Obersalzburg knew about Eva and her penchant for recording everything, even though she was virtually unknown to the German public, let alone the outside world. Here is a snippet from Joseph Goebbels diary from 1943:


The films have a very convoluted history. Eva, of course, flew to Berlin (against Hitler's orders) in mid-April 1945 on one of the last Lufthansa flights of the war before they were suspended. She left behind at the Berghof her reels of film, simply piled in one of her rooms.


When the US Army liberated Berchtesgaden a couple of weeks later, they found piles of canisters of unmarked film. Fortunately for posterity, it somehow had survived the USAAF bombing of the Berghof on 25 April 1945.


The US Signal Corps took the canisters away and sent them to the National Archives and Records Administration in Washington DC. Nobody apparently bothered to look at them or do anything with them but throw them into a warehouse. There they sat, gathering dust for decades, un-noticed and unwanted.


Nobody was interested in the films, and they were completely forgotten. Nobody, in fact, even bothered to catalogue them. They were simply thrown in with other war films - primarily Japanese - and left to rot.


However, they remained in absolutely perfect condition. That is fortunate, for many films of the time degraded or even burst into flame and caused fires.

A German film-maker, Lutz Beck, tracked the films down in 1972 after finding a photograph of Eva holding a movie camera. Until then, nobody even knew that Eva had taken any films, though there were a few photos known of her holding a film camera. Beck found the Braun cannisters piled with other films in an old aircraft hangar in Maryland. It was where the Signal Corps had dumped the films in 1945. He restored them, and showed them to the public. People were revolted. The experience scarred Beck. He did a service to posterity that we now appreciate.


Now more time has passed since Beck found the films than had passed then since the war. Nobody is forgetting the horrors of the Third Reich, but there is the possibility of a less visceral reaction to the films for historians and others, a more analytical approach. The films are all reproduced and available for purchase on various sites. Several hours are available. I have placed some samples below, though of course they could be presented better.


Albert Speer, Hitler's architect and Armaments Minister, once said that "Historians will be greatly disappointed by Eva Braun." She was the most modern one of the bunch, taking selfies and relaxing her subjects with her free-spirited demeanor so that they revealed completely different dimensions of themselves. Speer failed to see that the video record Eva Braun left behind, which could have been lost to bombs or neglect or simple ignorance, made her immortal.